The Stockholm Conference, or Third Zimmerwald Conference, was held from 5 to 12 September 1917. The subject of the discussions was the way in which a certain part of the socialist movement conceived peace and its approach to fighting war. The genesis of the meeting, however, was complex, intertwined with the events of the Russian Revolution and the differences of opinion within the International Socialist Bureau.

In August 1914 the international socialist movement broke up. In the preceding months, the Second International and its international secretariat, the BSI (International Socialist Bureau, founded in 1900), had mobilised strongly in favour of peacekeeping in Europe. In 1912, the Second International’s congress in Basel had been a major peace reunion: the speeches made and the debates that took place there all focused on how to avert war. Spring 1914 saw anti-war demonstrations organised by the working-class movement in many European cities. When, at the outbreak of the First World War, numerous socialist deputies from different governments voted in favour of war credits, the fracture within the International and the BSI was deep. This fracture was reflected within the various socialist parties, which saw the majorities opposing the minorities. In turn, the majorities can be divided into belligerents and neutralists and the minorities into pacifists and revolutionaries.

The Reorganisation of International Socialism during the War↑

After an initial moment of disorientation, and despite the various fractures, the socialist representatives began to hold international meetings again very soon during the war. The first meetings, however, followed the logic of governmental alliances: the socialist parties of the Allied countries met on one side, as did their counterparts from the Central Empires on the other side. Despite its efforts, the BSI failed to enable a single meeting that would bring everyone together. Only part of the revolutionary and strongly pacifist socialist minority managed to overcome this logic and meet in two towns in neutral Switzerland, the first time in Zimmerwald in 1915 and the second time in Kienthal in 1916, to discuss the socialist attitude to the ongoing First World War. Revolutionary minority groups were in fact not the only ones to support the pacifist cause: in the different countries some of the socialists also defended peace, even though they voted for war credits (Jean Longuet (1876-1938) in France is one example). However, these groups from the Socialist “centre” did not participate in the internationalist efforts to attain peace during the war. On their side, the socialist parties adhering to Zimmerwald’s ideas, the Zimmerwaldists, organised themselves in the International Socialist Commission (or Committee, the ISC), based at first in Basel and after the February 1917 Revolution in Stockholm.

The Organisation of the Stockholm Conference↑

The Stockholm Conference of 1917 is also called the Third Zimmerwald Conference and was literally the third meeting of the Zimmerwaldist group, organised by and with the ISC. However, its genesis is complex.

The BSI, together with the Dutch-Scandinavian committee, hoped to organise a new meeting of the entire Socialist International in Stockholm in 1917. But the latter was deeply divided in 1917, particularly on the question of a separate peace that Russia, in full political upheaval, could conclude with Germany – a possibility which was strongly supported by the Russian revolutionary socialists [the Bolsheviks led by Vladimir Lenin (1870-1924)]. The Zimmerwald group and a minority of the BSI were in fact favourable to the possibility of separate peace. Pieter Jelles Troelstra (1860-1930), a Dutch politician and member of the BSI, argued, for example, that general peace was also possible after a series of separate peace agreements. The majority of the BSI supported the opposite opinion and stated that the war would only end when a general compromise peace could be achieved. Unable to agree, three different groups – the Soviets, the BSI and the Zimmerwaldists – proposed three conferences to take place in Stockholm. The first two groups managed to come together to propose a common conference, but the date was always postponed due to internal disagreements, until the October Revolution stopped negotiations altogether. The ISC, i.e. the Zimmerwaldists, who opposed the organisation of a single conference, managed to hold a conference in Stockholm from 5 to 12 September 1917.

The Debates in Stockholm↑

In the Swedish capital, members of the ISC met with adherents of the Zimmerwaldist movement from neutral countries (Sweden, Norway, Switzerland and the Netherlands), the Russian Republic (Bolsheviks, Mensheviks, internationalist Mensheviks, Finns, Poles and Lithuanians), the Entente (Romanians and representatives of two U.S. leagues) and the Central Empires (Germans, Austrians and Bulgarians). The governments of the other Entente countries (France, Italy, Great Britain) denied their socialist delegates the passports required to travel to Sweden. Various groups that did not want to or could not send their delegates submitted national reports of activities to the organising committee (consisting of members from Russia, the Netherlands, Denmark, Sweden and Norway). It was on the basis of their content that the discussions of the conference began. The starting point for the general discussion on peace, which must be the guideline of the Zimmerwaldist International’s attitude, was the Russian formula, accepted by the organising committee: “peace without annexation or contribution, based on the freedom of peoples”.[1] All the delegations accepted this wording, although sometimes giving it different interpretations, and it was around these interpretations that the discussions took place. The questions debated were fundamentally articulated around the three points laid out in the invitation to the conference: “The World War and the International; the International’s peace program; the ways and means to carry out the program and end the war quickly”.[2] Then they moved on to the analysis of concrete cases (including Armenia, Poland, Trentino and Finland). The conference ended with the drafting of a manifesto, signed by the organising committee, in which the delegates reaffirmed the international proletariat’s will for peace and intention to fight against imperialism and recreate an International capable of common actions. The manifesto affirmed the will of the working class to prevent future wars. The means to be used to prevent the outbreak of any future conflicts were international law and arbitrage, to be exercised in a democratic Europe, guarantor of everyone’s freedoms. The manifesto was kept secret at first: it contained a call for coordinated mass action against the war by the proletarians of all countries. The conference felt it would be best to postpone its publication until all the Zimmerwaldist groups (even those who were not at the conference) had consented to this. It was finally decided to make it public a few days after the October Revolution. 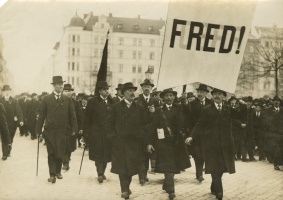 Troelstra at a May Day Demonstration in 1917 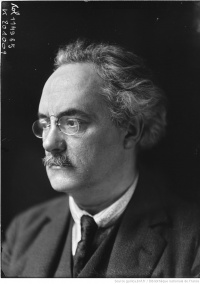 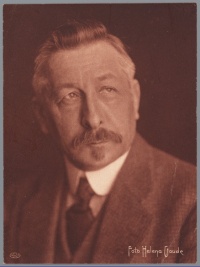