Armenians contributed greatly to the Allied victories in Europe and Western Asia, both as non-state and state combatants. They scored important victories, but also suffered defeats. The war precipitated an ethnic disaster and the loss of lands, but also restored statehood on a territory that included part of historic Armenia.

After the Ottomans aligned themselves with the Central Powers, they viewed Armenians as a tool of the Allies, even though Armenian soldiers and officers serving in the Ottoman army, and some 60,000 conscripts who joined them at the war’s outset, generally fought loyally and bravely.[1] Suspicion turned violent in 1915 when forced deportations and killings of Armenians erupted on a massive scale, prompting the Allied Powers to charge the Turks with committing “a crime against humanity,” which came to be known as the Armenian Genocide.

On the opposite side of the trenches, Russian Armenians formed volunteer detachments, or squads, called druzhinas in Russian, within the Russian Caucasus Army. Four combat and one reserve units were formed at the outbreak of the war. Two more detachments were raised as the war progressed. Each detachment numbered from a few hundred to 1,000 Russian Armenians, most of whom were not citizens of the Russian Empire nor otherwise obliged to serve.

Returning to the battlefront to serve in the French Armenian Legion[2] were Ottoman Armenian soldiers from prisoner of war (POW) camps, as well as Armenians from around Europe, the Middle East, Ethiopia, and India, as well as far-flung places such as the United States. Having placed their hopes on the promises of intervention in Cilicia, a part of the Armenian homeland on the Mediterranean coast, the legionnaires assisted the British and French in winning the decisive Battle of Megiddo. However, the Allied governments were unwilling to translate their military victories in the Middle East into a fair arrangement for Armenians, because their post-war priorities with regard to Turkey had changed. In 1919, the British and, beginning in 1920, the French, withdrew from Cilicia, disbanding the Armenian legionnaires along the way.

During the war, Armenians had several political parties, some originating in Ottoman Armenia, others in Russian Armenia. The oldest one was the Social Democrat Hunchakian Party (collectively known as Hunchaks) founded in 1887, whose original goal was to attain independence for Armenians from the Ottoman Empire. The second oldest party was the Armenian Revolutionary Federation, or Dashnaktsutyun (collectively referred to as Dashnaks), founded in 1890, whose primary goal was to relieve the plight of Ottoman Armenians through reforms.[3] In 1917, Armenian members of Russia’s Constitutional Democratic Party founded the Armenian Populist Party, which had a liberal programme. In 1921, the remnants of the Armenakan Party (founded in 1885), formed the Armenian Democratic Liberal Party (collectively known as Ramgavars). Unlike the Hunchaks and Dashnaks, who followed the leftist ideology, Ramgavars advocated liberalism and capitalism.

After the February 1917 Revolution, the Russian Caucasus Army began to disintegrate. Armenians living in the territories occupied by the Russians during their advance into the eastern Ottoman Empire had to flee with the retreating Russian units. The far less numerous Armenian units took their place in an effort to stop the onset of the Ottoman Army. On the day following the second revolution in October, the Bolsheviks issued a call to all Russian officers and soldiers to return home. This was a blow to the Armenians, to whom the Russian army was a bulwark against a recurrence of Turkish violence.

By the beginning of 1918, the Armenian army consisted of two rifle divisions, three volunteer brigades, a cavalry brigade, and several militia units. The divisions were made up of men from the druzhina units, augmented by Armenians who decided to join them from Russian regular army units. Six batteries represented the artillery of each of the two divisions. The volunteers were natives of Ottoman Armenia who enlisted in Van, Erzurum, Erzincan, and other areas. Mountain batteries were organised for attachment to the three brigades.

In all, with twenty-four battalions of riflemen and eight battalions of volunteers, each numbering between 400 and 600 men, the Armenian army did not exceed 16,000 infantry, 1,000 cavalry and some 4,000 militiamen. Such a small army could not hold out long against a hostile Turkish force that vastly outnumbered them.

On 3 March, the Bolsheviks signed a peace treaty with the Central Powers at Brest-Litovsk, whereby they ceded Kars, Ardahan, and Batum to the Turks. Two months later, in violation of the treaty, the Turks crossed the border with Armenia and attacked Alexandropol, poised to crush the Armenians, seize Transcaucasia, and gain access to the oil reserves near Baku. The Armenians resisted heroically and routed the intruders at Sardarabad, Bash Abaran, and Karakilisa. On 28 May, nearly six centuries after the fall of their last medieval state, the Kingdom of Cilicia, Armenians re-gained independence.

State Combatant and Signatory to Treaties↑

Armenia met the end of the war as an associated member of the victorious Allied Powers. Armenian military units under the command of Antranik Ozanian (1865-1927) continued to fight on the Allied side until the Armistice of Mudros was signed on 30 October 1918 between the Ottoman Empire and Britain acting on behalf of the Entente, marking the Ottoman surrender. Under the terms of the armistice, in the Caucasus, the Ottomans had to retreat to the pre-war border with the Russian Empire.

As one of the insurgent nationalities which voluntarily fought with the Allies and seceded from the constituent states of the Central Powers at the end of the war, Armenia was allowed to participate as a winning nation in the post-war peace treaties. The Treaty of Sèvres, part of the Treaty of Versailles, was signed on 10 August 1920 between the Allied Powers and representatives of the government of Turkey. The pact abolished the Ottoman Empire and provided for an independent Armenia.

The Allied Powers sought to give Armenians a homeland that would incorporate much of what had been Greater Armenia in antiquity. The new Armenian state covered about 150,000 square kilometres, extending from Transcaucasia to Van, Bitlis, and Erzurum, with Trabzon as a sea outlet. Because matters relating to the delimitation of boundaries were left to United States President Woodrow Wilson (1856-1924), the new state is sometimes referred to as “Wilsonian Armenia.” That Armenia was not to be, however. President Wilson announced on 22 November 1920 that he had drawn the map showing the boundaries of Armenia, just about the day Kars, Ardahan, and Alexandropol fell to the invading Turks. Seven days later, the 11th Red Army marched into Yerevan, asserting Soviet control over the remnants of Armenia, whose territory was soon further reduced to just 29,800 square kilometres. 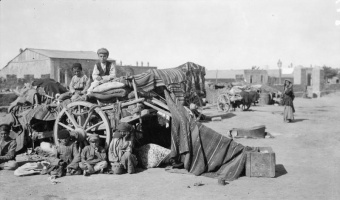 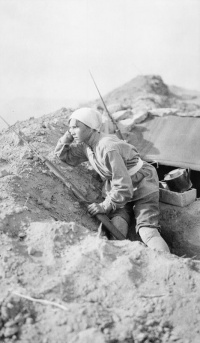 An Armenian woman in the trenches