Artillery consisted of the military’s heavy firearms. As a branch of the armed forces, its purpose was to fire explosive-filled projectiles across relatively large distances. In contrast to the infantry and the cavalry, the artillery could not enter into combat on its own. By the same token, other weapons required artillery support in order to be effective in battle.

The structure of artillery↑

Artillery is divided, technologically and tactically, into light and heavy artillery. Light artillery was generally referred to as "field artillery" and intended for mobile warfare, which was the norm until 1914. The artillery’s weaponry needed to be transportable. This required that it be able to bear up under long marches and cope with difficult terrain. As result, there were natural weight limits for artillery materiel, which was pulled by horses. This restricted both the caliber and the range, for large distances required powerful charges and hence heavy gun barrels and mounts. The field artillery from 1914, which consisted mainly of cannons with flat trajectories, had calibers of between 7.5 and 8.4 cm.

France devised a groundbreaking innovation in 1897, when it introduced a field gun with long barrel recoil. With conventional guns, the barrel was firmly connected to the mount. They consequently jerked backwards when fired, and had to be both reloaded afterwards, and returned to their initial position and reset. The new type of gun featured a barrel in a cradle which could be slid backwards in the cradle. A brake mechanism elastically absorbed the barrel and returned it to its initial position. The weapon itself remained steady and it was no longer necessary to reset the weapon after each shot. The rate of fire increased exponentially, as a consequence, but so did the required supply of ammunition.

Foot artillery, referred to as Fußartillerie in Germany, was considerably more complex and covered a variety of different weapons. Its proper domain was siege warfare in attack and defense. Mobility was of secondary importance. Of greater importance were the distance and impact of the individual shells. The Russo-Turkish War (1877/1878) had demonstrated that light field guns were not able to destroy improvised field fortifications. In Germany, this led to the buildup of “heavy artillery in the field army” with the newly manufactured large caliber guns that were still sufficiently maneuverable for mobile warfare. In 1914, Germany had an obvious lead in this type of artillery.

Along with caliber and distance, the trajectory of a round was an important criterion for judging the capabilities of guns. Cannons fired with flat trajectories; howitzers and mortars, by contrast, had curved lines of fire. The latter were thus able to shoot over high cover or hit targets behind them, since the shells descended at a steep angle at the end of their flight paths. Their range of fire, however, remained inferior to that of guns of the same calibre.

In 1914, mobile warfare largely came to a standstill within several weeks and transformed into trench warfare. As a result, siege warfare became the norm. The importance of heavy artillery increased to the degree that field fortifications were driven deeper into the ground vertically and structured with greater complexity horizontally. Thousands of old siege guns from the 19th century, still lacking recoil mechanisms, made their way to the front lines. While their firing rate was low and maneuverability minimal, they could nevertheless shoot high-caliber shells across great distances. Even though every effort was made to push ahead with the manufacture of modern recoil artillery, many of the old heavy guns remained in use through the end of the war and even after.

Light artillery was supplemented - not replaced - by heavy artillery. Small guns with rapid rates of fire continued to be indispensable for many artillery-related tasks. In the First World War, the German field artillery is said to have fired 222 million rounds.

The German field artillery entered the war with 5,600 light guns. An additional 1,400 guns existed in the home territory among training units or as reserve equipment. In the last year of the war, the field artillery had approximately 11,000 guns. The exact increase of heavy artillery is difficult to estimate due to the large quantity of old guns that were initially stored at fortifications. In addition to the 1,397 modern recoil guns, there were still 2,197 heavy guns of the old type. By the end of the war, there were approximately 5,000 heavy guns on the fronts, most of which were modern. The 15 centimeter heavy field howitzer became the German artillery’s main battle weapon on the Western Front.

At the beginning of the war, the French artillery possessed 3,960 light guns and 688 heavy guns for mobile operations. 380 of these, however, were old models without a recoil mechanism. In the fortifications, there were 7,000 old guns, which included 3,688 powerful 120- and 155 millimeter cannons. By the end of the war, there were 5,580 light and 5,749 heavy guns in use.

In addition to light and heavy artillery, new types of special anti-aircraft artillery were developed during the war and used for the direct support of the infantry. Artillery related tasks were also fulfilled by small mortar-type weapons with short firing ranges called “trench mortars” (German: Minenwerfer). Originally constructed for siege warfare, their number increased during the war in Germany from 186 to 16,000 and they were used primarily by the infantry. In France, the special artillery was referred to as artillerie de tranchée (trench artillery).

In order for these instruments of violence to carry out their destruction efficiently, information was required on their targets. For this reason, a comprehensive and highly sensitive surveillance and fire control organization emerged during the war which, along with conventional methods like visual spotting from the ground, also employed innovative methods of determining the location of targets by means of acoustics and light.

The collaboration between the infantry and the artillery was already one of the primary topics of tactical discussions before the war. A wholly reliable solution, however, was not discovered by the end of the war, for it proved impossible to guarantee continual and uninterrupted communication between infantry and artillery. Classical modes of firing such as curtain fire and rolling barrages were mechanistic firing procedures determined in advance. These could hardly be altered in their operational sequence or adapted to the infantry’s course of fighting. In Germany, it was still discussed in the final year of the war whether curtain fire, which had been a routine practice for years, even made sense!

Artillery was able to destroy all field fortifications with a commensurate increase in the intensity of the effort. Just the same, the required expenditure of materials and time actually limited the success that could be achieved, not least because the inflicted damage created an artificial obstacle in the terrain for the attacking force. As a result of artillery fire, the infantry was forced to abandon its continuously occupied positions and assume an outpost-like occupation of the frontline. The need to destroy even small, difficult-to-detect targets intensified the artillery expenditure even further, which reached its peak in 1917.

The accuracy of the weapons largely depended on their condition (barrel wear) and day-to-day variables such as wind, temperature and air density. By the last year of the war, it was possible to effectively exclude such errors of the day through calculations. This made it possible to use precision artillery fire in surprise attacks. As a result of the inevitable time-consuming preparations, however, this did nothing to change the fundamental inflexibility of the artillery apparatus.

Besides the actions of small, raiding patrols, every military operation in the First World War required massive artillery support if there was to be any hope of success. In mobile warfare, most soldiers were killed or wounded by infantry fire. By contrast, in trench warfare, the artillery was responsible for 75 percent of the known casualties. During the war, the artillery not only experienced considerable growth in absolute numbers, but also in terms of its relative share of the entire army. This is demonstrated by the example of the French military: In 1914, artillery-men made up 20 percent of the army; in 1918, it was 38 percent. 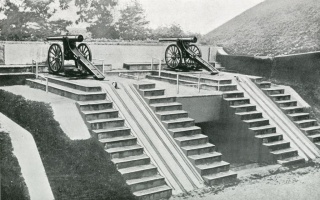 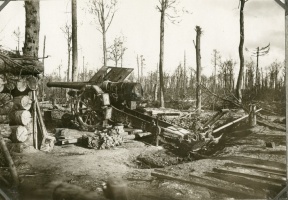 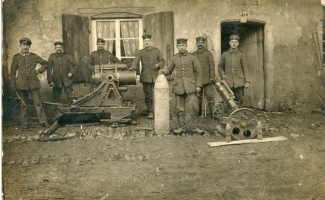 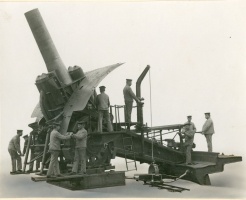 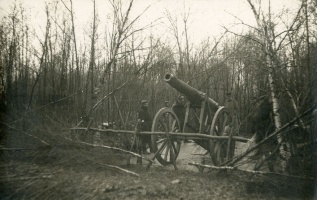 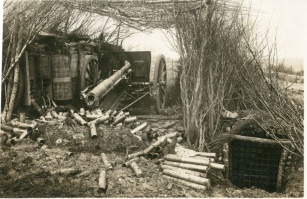 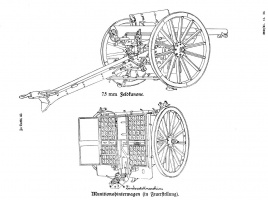 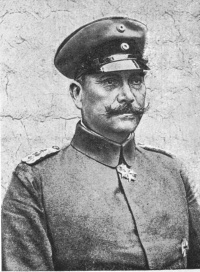