At Brest-Litovsk, from 22 December 1917 to 10 February 1918 (Julian calendar: 9 December − 28 January), Soviet representatives and the Central Powers negotiated a separate peace. On 3 March 1918, following the breakdown of the talks and a new German offensive, Lenin accepted the “dictated peace” that deprived Russia of eighteen provinces and nearly 30 percent of its pre-war population.

The day after the Bolshevik seizure of power on 7 November 1917 (Julian: 25 October), the Soviet government promulgated its “Decree on Peace”, urging all combatants to conclude a “just, democratic peace”.[1] The Allies decided on 22 November not to respond. But the Central Powers had been awaiting exactly such an invitation; Germany had funded Vladimir Ilich Lenin’s (1870-1924) return to Russia hoping he would end the war on the Eastern Front. On 15 December Germany, Austria-Hungary, the Ottoman Empire and Bulgaria concluded an armistice with Russia. The negotiations took place at the German High Command Headquarter East in the fortress of Brest-Litovsk. While the Germans used the role of hosts to woo the Russians with oysters and roast goose, the People’s Commissar for Foreign Affairs, Leon Trotsky (1879-1940), wanted the talks transferred to Stockholm, where the Germans had less power and the world could watch.

Brest-Litovsk brought two utterly different cultures face to face: the traditional diplomacy of the Central Powers confronting the revolutionaries’ flair for political agitation. Although the Central Powers continued to use French among themselves, it was agreed that the treaty languages should be German, Hungarian, Bulgarian, Turkish and Russian. Eager to abolish traditional diplomacy, the Bolsheviks sent among the twenty-eight delegates to Brest-Litovsk on 22 December 1917: a sailor, a soldier, a peasant, a worker, and a female terrorist who boasted of having assassinated a Governor-General. The Central Powers’ representatives, in contrast, were of aristocratic origin and remained comme il faut in all dealings with their “guests”. The delegation leaders Richard von Kühlmann (1873-1948), Kajetan Mérey von Kapos-Mére (1861-1931), Mehmed Talat Pasha (1872-1921) and Khristo Ivanov Popov (1862-1933) drew the Bolsheviks under Adolf Abramovich Joffe (1883-1927) into six days of polite exchanges, only to reach an impasse: each side, invoking the “right of national self-determination”,[2] insisted that on conclusion of a peace the other must withdraw its troops from Russia’s occupied western regions.

The Russian delegation, now led by Trotsky, returned to Brest-Litovsk on 7 January 1918. In Trotsky, Lenin had sent an agitator whose remit was to ensure negotiations dragged on until world revolution broke out or the Allies came to the table. Trotsky incarnated a “neo-diplomacy” that abolished all conventions, replacing efforts at friendship with undisguised opposition, courtesies with rebuffs, the spirit of compromise with the resolve to overcome. The real target audience for Trotsky’s fiery rhetoric, urging the liberation of peoples and colonies, was the world at large. On 10 February, with the German side trying to force him into positive action, Trotsky perplexed his negotiation partners by declaring: “no war – no peace.” Although he thus emerged from the talks with a moral and rhetorical victory, the German High Command waited no longer: Operation Faustschlag (Punch) began on 18 February, driving deep into the former tsarist empire’s territory. Maximilian von Baden (1867-1929) commented: “[Trotsky] emerged from Brest-Litovsk a martyr for self-determination, we as violators of the smaller nations.”[3]

Within a few days of the German victory, British and American troops landed in northern Russia to prevent the expansion of German influence and to secure previously delivered military supplies. On 12 March, prompted by losing the “peripheral lands” and by the Allied intervention, the Bolsheviks moved the capital to Moscow. Diplomacy and the Foreign Ministry were entrusted, until 1930, to Georgy Vasilyevich Chicherin (1872-1936), aristocrat by birth and revolutionary by conviction. The Versailles Peace of 1919 rendered the Treaty of Brest-Litovsk null and void.

As John W. Wheeler-Bennett puts it in his book title Brest-Litovsk. The Forgotten Peace, these negotiations have been rather neglected by historians.[4] Brest was treated like a merely German-Russian encounter without lasting consequences. The few books do not reveal major research debates about it; the best narrations remain the memoirs of the delegates. 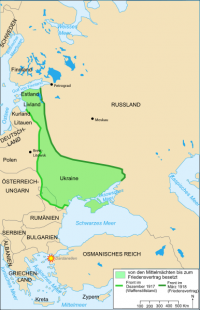 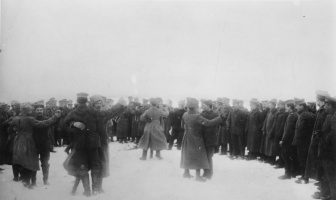 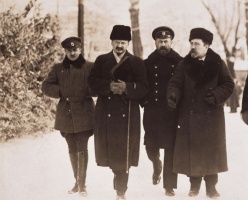