The Great War was a severe trial for Belarus and its population. It ruined the local economy and caused a massive exodus of refugees. An attempt to establish Belarusian statehood was made during the chaos caused by the collapse of the Russian Empire, revolutionary changes, various occupations, and wars.

Belarusian territories in the Russian Empire were divided between Vilna, Vitebsk, Grodno, Minsk and Mogilev provinces (gubernia). In the literature different terms for “Belarus” are used (Belorussia, Byelorussia, White Russia, and White Ruthenia). Before and during the war Belarusian territories were treated by the Russian military command as strategically important; in Baranovichi the Russian General Headquarters (Stavka), led by Nikolai Nikolaevich, Grand Duke of Russia (1856-1929), was established. Since 1915 the Eastern Front had divided the territory of Belarus. From August 1915 to February 1918 Nicholas II, Emperor of Russia (1868-1918) headed the General Headquarters in Mogilev. From the beginning of the war Belarus was hinterland, providing the Russian army with necessary supplies. Transport and local industry were also subordinated to military needs. The militarization negatively affected labour conditions, which worsened considerably as many mobilized workers at factories were replaced by recruited women and teenagers. Peasants’ households also experienced the lack of manpower. Martial law restricted public activity and strikes were forbidden.

From the beginning of World War I a mass campaign against espionage was implemented throughout the Belarusian territories as part of the fight against the enemies. Some Germans and Czechs were deported to the internal regions of the empire. The significant damage was caused during the “Great Retreat” of the Russian army in 1915. The Jewish population experienced deportations eastward that coincided with antisemitism and pogroms by the military. Migrations caused by the war in 1915 could be defined as the great Belarusian exodus (bežanstva). Many families became refugees within the Tsarists’ policy of evacuation. The Russian authorities, military commanders and representatives of the Russian Orthodox Church encouraged local Belarusians to leave. More than 1.4 million people (mostly Belarusian Orthodox believers) moved eastwards. The Eastern Front had stabilized by the end of 1915. During the battles in the Belarusian territories in 1916-1917 both sides used massive bombardment and poison gas. The details of crimes on civilians committed by German and Austro-Hungarian soldiers are known (see “Rape” and “Atrocities”). The majority of prisoners of war taken here by the Russian army were exiled to internal regions of the empire.

One of the first signs in Belarus of the events which would lead to the tsar’s overthrow were the Gomel soldiers’ demonstrations in October 1916, which were firmly suppressed. The February Revolution and popular politics developed a specifically Belarusian aspect. For the Belarusians there was the Belarusian Socialist Hramada (Assembly), Belarusian Christian Democrats and others. By December 1917 they were active in the First All-Belarusian Congress held in Minsk and in the established Belarusian National Council. The Zionist movement and the Jewish Labour Bund won popularity among Jews. All-Russian parties like the Party of Socialists Revolutionaries and the Russian Social Democratic Labour Party of the Bolsheviks were also active in political life. Polish parties and groups like the Polish Socialist Party, the Polish Socialist Union, the Social Democracy of the Kingdom of Poland and Lithuania operated in Belarus as well. Meanwhile the collapse of the Eastern Front and the consequent radicalization of soldiers considerably destabilized the situation. Desertion and the rise of criminality parallel to weak state control resulted in massive violence, including guerrilla warfare, paramilitary violence, and anti-Jewish pogroms.

Territories conquered by the German army were partially subordinated to the so-called Ober Ost. The German authorities used labour and material resources from the occupied territories to meet their needs. The Russian-led evacuation of some industries and specialists weakened the local economy. To help consolidate their position, German authorities fostered Belarusian nationalism. Belarusian schools and organizations functioned under the strict control of the German administration. With the Treaty of Brest-Litovsk the Bolsheviks ceded control of practically all of Belarus, with German troops occupying big cities like Minsk, Polotsk, Mogilev and Gomel. Meanwhile, the unsuccessful attempt at state building was made under the German occupation in March 1918, when representatives of Belarusian political groups established the Belarusian People’s Republic (BNR). The Germans’ ambivalent attitude and instability within the governing coalition prevented the consolidation of the BNR.

Wars after the Great War and the Struggle for Belarusian Statehood↑

The end of the Great War and the withdrawal of the German occupation force did not mean that peace would come to Belarusian lands. The struggle for territories between a newly established Polish state and Soviet Russia led by the Bolsheviks was conducted on Belarusian lands. Even before the Treaty of Brest-Litovsk, Soviet revolutionary forces clashed with the Polish Corps, led by General Józef Dowbór-Muśnicki (1867-1937), in January 1918. After the German withdrawal the Bolsheviks established the Belarusian Soviet Socialist Republic (SSR) in January 1919, by February 1919 it was merged with Lithuania (so-called Litbel), and by July 1919 the vast Belarusian territories appeared under Polish rule. Within the Polish-Soviet War the Belarusian SSR was re-founded in July 1920 with its capital in Minsk. The Russian Civil War’s effect on Belarus was discontent with the Bolsheviks’ policy, and resulted in anti-Bolshevik riots, guerrilla warfare and political banditry suppressed by the Red Army. The attempt by Stanisław Bułak-Bałachowicz (1883-1940), helped by the Polish military, to ignite an anti-Soviet uprising in November 1920 proved unsuccessful. The Treaty of Riga divided Belarus between the Polish and Soviet states.

World War I greatly affected Belarusian lands, which from 1915 to 1920 became the battlefield between different fighting sides (the German, Austro-Hungarian and Russian armies; Polish troops, guerrilla forces and the Red Army). The population had to survive the hardships of wartime: mobilization, requisitions, and forced labour, as well as the exodus of refugees. Many thousands of people (an exact number is still unknown) became victims of military actions, paramilitary violence, hunger, and disease. The war left a ruined economy and depopulated areas. New borders divided the Belarusian territory. Soviet historians only wrote about revolutionary changes and the struggle against intervention; recent historiography has explored such issues as the Belarusian national movement, education, inter-ethnic relations and refugees. 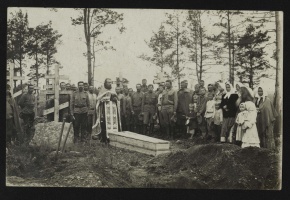 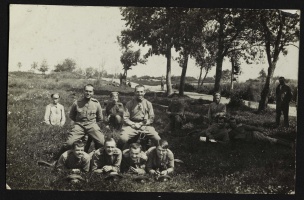 Russian soldiers lazing in the sun A trench near Smorgon 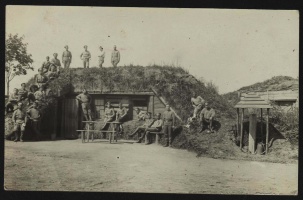 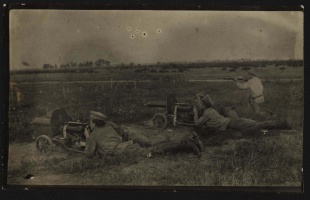 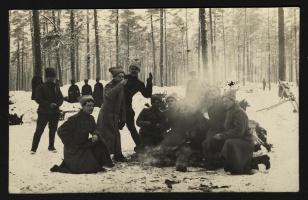 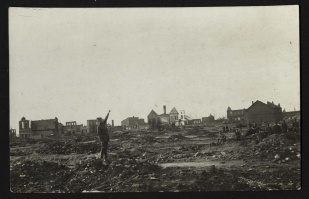