The Treaty of Riga was signed by Poland and the Soviet state on 18 March 1921 and was preceded by a preliminary treaty of 12 October 1920. It ended the Polish-Soviet War of 1919-1920 and was a crucial factor in establishing peace in Eastern Europe following the Great War. It established the Polish-Soviet border, known as the Riga border, which lasted until 1939.

The negotiations to end the Polish-Soviet War began on 17 August 1920 in Minsk, as the Battle of Warsaw was just starting. The Polish delegation was led by Jan Dąbski (1880-1931), the Deputy Minister of Foreign Affairs. Karl Danishevskii (1884-1938), a member of the Revolutionary-Military Soviet of the Republic, headed a joint delegation of Soviet Russia and Soviet Ukraine. The Soviets demanded that the border follow the Curzon Line, suggested by and named after the British Foreign Secretary, Lord George Curzon (1859-1925) on 11 July 1920, and that the Polish army be reduced to 50,000. An extra-territorial railroad line was to link Soviet Belarus with Germany’s East Prussia through Polish territory. The Poles rejected these terms. An unofficial meeting between the Leftists within the Polish delegation and some members of the Soviet delegation indicated that agreement on the border in Belarus would be possible, provided that Poland terminated its alliance with the émigré leadership of the Ukrainian People’s Republic, led by Symon Petliura (1879-1926). The Minsk negotiations adjourned on 2 September to resume in Riga.

The Riga negotiations began on 21 September, as the Polish army was starting its offensive in Belarus. Dąbski still led the Polish delegation, while the completely overhauled Soviet delegation was headed by Adolf Ioffe (1883-1927). Ioffe had significant experience in diplomacy, having been ambassador in Berlin and having negotiated the agreement of 27 August 1918 with Germany as well as peace treaties with Estonia, Lithuania, and Latvia. He presented an official Soviet declaration, prepared in Moscow, which withdrew the earlier Soviet terms of peace and proposed to put aside the issue of the self-determination of nations – such as Ukrainians and Belarusians – inhabiting territories between Russia proper and Poland proper; and which drew the border “considerably to the east” of the Curzon Line, while leaving East Galicia on the Polish side. The offer was valid until 5 October. The Poles welcomed these terms, while deploring the deadline which made it impossible for them to drag out negotiations. Ioffe next put forth a draft of the preliminary treaty in which he proposed a border just east of the Curzon Line and reopened the question of whether East Galicia should be Polish. The draft disappointed the Poles and created a crisis in negotiations.

To break the impasse, Dąbski proposed confidential negotiations with Ioffe on a one-to-one basis. These went smoothly and encouraged Dąbski to consult his delegation on territorial terms. Everyone agreed that Poland should have a strategic railroad linking Baranowicze, Łuniniec, Sarny and Równe, but the question of Minsk led to long debates. Acquisition of the Belarusian capital might allow Poland to become a federal state. Most members of the delegation – influenced by Stanisław Grabski (1871-1949), a leading National Democrat – preferred a Polish national state. Finally, the Poles decided not to demand Minsk, but to insist on a corridor linking Poland with friendly Latvia. The Soviets accepted these terms, and on 5 October a joint statement was issued, declaring agreement on all vital questions. Technical details were hammered out over the next few days. The treaty was signed on 12 October 1920.

The treaty established the so-called Riga border, leaving the strategic railroad that linked Baranowicze-Łuniniec-Sarny-Równe as well as East Galicia on the Polish side and Minsk on the Soviet side. The border linked Poland with Latvia and separated the Soviet state from its informal ally, Lithuania. The Soviet state was not to meddle in the Polish-Lithuanian quarrel over Vilnius. Poland officially recognized Soviet Ukraine and Soviet Belarus, and agreed not to support Petliura’s troops after 2 November, when the treaty became legally binding. The treaty recognized that Polish territories had participated in the creation of the Imperial State Bank’s gold reserve, and provided inter alia for the return of the movable property as well as archives, libraries, and works of art removed from Poland to Russia.

The armistice agreement stipulated that hostilities stop on the night of 18-19 October. Polish troops, which had advanced east of the new border, were to withdraw to the west of it soon after 2 November 1920.

The preliminary treaty was a compromise whereby the Soviets agreed to significant territorial concessions, as compared to the Curzon Line, in return for Poland’s abandonment of Petliura. The Poles gained a free hand to deal with Lithuania and the Soviets to finish off Peter Wrangel (1878-1928), the last White Russian general.

The negotiations began on 19 November 1920. The delegations were still headed by Dąbski and Ioffe, although the delegations’ membership had changed. The negotiations proceeded very slowly due to a number of contentious issues. For example, the Soviets accused the Poles of arming Petliura’s troops, who continued to fight against Soviet Ukraine. The Poles replied that they had stopped arming them on 2 November, as required by the preliminary treaty. The Soviets blamed the Poles for mistreatment of prisoners of war (POWs). The Poles maintained that the Soviets were guilty of even greater mistreatment of POWs. The issue of the gold reserve proved particularly contentious. The Polish delegation argued that Poland was entitled to 300 million gold rubles; the Soviets offered 30 million rubles, but not in gold. A crisis ensued. Moscow ignored Ioffe’s advice to be more flexible, but the Kronstadt mutiny finally forced it to acquiesce to paying in gold. The Poles accepted the amount offered. After this breakthrough, all other issues were quickly resolved. The treaty was signed on 18 March 1921.

The treaty confirmed the Riga border established by the preliminary treaty. Each side was not to support organizations aimed at undermining the other’s political or social order. All former citizens of the Russian Empire who had lived on Polish territory could opt for Polish citizenship. The Soviet state was to return all libraries, archival collections, works of art, etc., that had been removed from Poland. Due to the Polish territories’ participation in the creation of the Russian Imperial gold reserve, Poland was to receive 30 million gold rubles. The Soviet state agreed to buy out, for 27 million gold rubles, the railroad rolling stock that had been removed from Polish territory. The Soviet state was also to return Polish property. Polish funds, kept in deposit in former Russian imperial banks, were to be returned in paper money. Poland was released from the obligation to pay any share of the debts of the former Russian Empire.

While its financial-economic terms were never fulfilled, the treaty was very important. The Riga border ensured that Poland would become a national state, albeit one with large Ukrainian and Belarusian minorities. The split of Belarus and Ukraine, however painful to the two nations, allowed their national activists to survive under Polish rule. The revolution would not be exported to Germany and the rest of Europe. Thus, several new nation states in Eastern Europe – such as Poland, Lithuania, Latvia, and Estonia – managed to survive. The treaty’s recognition of Soviet Ukraine and Soviet Belarus influenced the creation of the Soviet Union. Overall, the treaty stabilized Eastern Europe following the Great War. 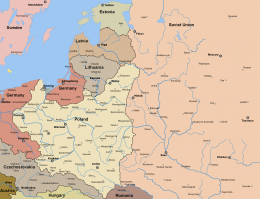 Central and Eastern Europe after the Riga Peace Treaty