Collaboration is often associated with the military occupations of the Second World War, but there was a precursor to this multi-faceted phenomenon in occupied France and Belgium during the First World War. This article examines the meaning of collaboration in this context, its different forms, and the reaction to it during and after the war.

In occupied France and Belgium in 1914-1918, the word “collaboration” (literally meaning “working together”) was rarely used and had no pejorative meaning. However, scholars use this term to describe real or perceived complicity with the occupying power. One alternative formulation case is “misconduct” ("mauvaise conduite"). Collaboration had both legal and extra-legal dimensions. It involved treasonous acts defined by the French Penal Code as “intelligence/commerce with the enemy” and the Belgian Penal Code as behaviours undermining the internal and external security of the state. Yet it also involved perfectly legal actions perceived as treasonous by compatriots.

It is hard to gauge the precise extent of this collaboration, but it was less prevalent than during the Second World War, partly due to the different political and military situation. Only part of France was occupied, whereas the small unoccupied part of Belgium was defended by Belgian forces led by Albert I, King of the Belgians (1875-1934). The Belgian government moved to Le Havre, and both French and Belgian armies continued to fight the Germans alongside powerful allies. The occupied populations were therefore not citizens or subjects of defeated powers, but of belligerent states aiming to liberate their territory and reassert sovereignty. Yet Allied victory was not certain, and the reality of a lengthy occupation meant that a degree of complicity with the Germans was required for some locals, and desired by others.

Local authorities and notables, especially mayors or municipal councillors, worked with the Germans, who held them responsible for the good behaviour of the population and the fulfilment of orders. Mayors also signed German posters informing the population of the latest regulations. Refusal to fulfil German demands risked collective or individual punishment, such as fines, imprisonment, or stricter curfews. On the other hand, working with the Germans made it easier for local authorities to carry out other duties such as food provision, which required German support and passes for circulation. This literal collaboration was not illegal and was potentially beneficial for the population. However, some mayors, municipal councillors, and local notables were perceived by compatriots as working too readily with the Germans or being too friendly. Others allegedly abused their power by denouncing compatriots for infractions of German rules, or by using the Germans to punish political opponents via fines, imprisonment, or forced labour.

Local judicial and police forces were permitted to carry out some normal duties, but their powers were reduced. The Germans used their own police forces or personnel for the most sensitive tasks, such as deportations or detaining suspected resisters. French and Belgian police officers were therefore usually spared accusations of collaboration, but they did work with the Germans more explicitly in some areas, such as maintaining public order or controlling prostitution and the black market, and were occasionally criticised for this by compatriots.

A minority of locals worked voluntarily for the occupier as agricultural or factory labourers, even though other workers were often forced to sign a declaration of voluntary work. Others, more commonly, profited from the occupation in a literal sense, engaging in a unique form of profiteering: establishments or individuals traded enthusiastically with the Germans, or helped them find hidden gold in return for a cut. Some enterprises worked with the occupier, even in fields with obvious importance for the German war effort, such as factories which were used to manufacture sandbags, or coal/oil mines, of which there were many across northern France and Belgium. It is hard to establish the voluntary nature of such commercial relationships, and often industrialists preferred to work with the Germans rather than have their business entirely requisitioned and, possibly, their employees fired.

Ideological collaboration was extremely rare. The Germans did not have a clearly-defined political ideology, an important difference from the Second World War when hundreds of thousands of occupied Europeans supported various aspects of Nazism or Fascism, and thus engaged in what has been termed "collaborationism" (ideological collaboration). Nevertheless, some explicitly ideological or political support for the Germans can be found for 1914-1918. In France, a few individuals wrote articles for the German-published, French-language propaganda newspaper La Gazette des Ardennes. Dozens of equivalent publications appeared in Belgium, such as La Belgique. Yet Belgium had its own specificity, the most evident and well-documented form of ideological-political collaboration: Flamenpolitik. The Germans promoted Flemish language and culture, and encouraged the Flemish movement to envisage separation. The German administration eventually split Belgium into Flemish and Walloon sections in March 1917, but only a minority of Flemish separatists (about 15,000) and even fewer Walloons were involved in this "activisme", which was opposed by most Belgians.

Other Forms: Sexual Relations, Denunciations, and Collaboration with the Police↑

Other behaviours were perceived negatively from a patriotic point-of-view, and occupied populations often linked different forms of collaboration. Sexual relations with the Germans were seen by some as treasonous, a betrayal of the nation. Sometimes even friendly interactions with Germans were frowned upon, although these could not be avoided in the complex reality of occupied life. Yet women perceived to have engaged in "intimate relations" were especially liable to be accused of other forms of collaboration, notably espionage and denunciations, or of simply using the occupation to their advantage – such as convincing the occupiers to punish those who insulted them. Indeed, there were many cases of denunciation across occupied France and Belgium, which could provide a means for settling personal scores. In occupied France, Germans claimed to be shocked at the extent of this phenomenon. Alleged letters of denunciation were sometimes displayed in public, and there was a widespread belief among the occupied population that denunciations did occur frequently, even though this was and is hard to prove.

Such denunciations were clearly illegal under French and Belgian law. So too were similar actions like genuine spying, or acting as a paid informant or "mole" for the German military or secret police. The line between these official actions and more spontaneous denunciation could be blurred. Informants and spies were charged with uncovering organised resistance, or informing the Germans of individual acts of defiance or breeches of regulations – such as locals hiding goods from the occupiers to avoid them being requisitioned. Those who worked as moles and informants, although small in number, were particularly hated by the local population. Extremely rare cases exist of locals donning German uniforms to help the occupier with requisitions, at least superficially integrated into the German police – but the motives for this are unclear, and such individuals also came under harsh criticism from compatriots.

Reprisals During and After the War↑

During the occupation, collaborators sometimes faced criticism and insults from compatriots. Suspected profiteers were called "mercantis" (dishonest merchants), whereas alleged sexual collaborators were called "Femmes à Boches" (women for the Boches) or "whores." In Lille-Roubaix-Tourcoing and Brussels, one clandestine tract published in 1917 was filled with misogynistic language, but also listed the names and addresses of men and women suspected of collaboration. Rarely, collaborators were subject to physical attacks during the war, notably hitting and pulling or shaving off the hair of women believed to be sleeping with or working for the Germans. This happened in Lille-Roubaix-Tourcoing in spring-summer 1915. The occupiers punished the perpetrators, which explains why such events were uncommon.

With the liberation, revenge against collaborators became possible. In France, popular violence was surprisingly rare – the full reasons for this are unclear, but it seems to have been partly because Allied armies immediately imposed their authority in the liberated regions and the population had faith in legal means for punishing occupation wrongdoing. Nevertheless, there were some cases of windows being smashed, or women being attacked, notably in Lille. Similar events, especially shaving the heads of presumed female collaborators, and exacting revenge against war profiteers, were widespread in Belgium. Yet there were also legal purges after the liberation and into the interwar years. In Belgium, the government reasserted its authority by engaging in "repression": thousands of individuals suspected of collaboration, and often denounced by compatriots, underwent investigation and trial. Hundreds were found guilty, especially of political or economic collaboration, and sentenced to terms of imprisonment of various lengths; a smaller number were sentenced to death. In France, considerably fewer investigations and trials took place, largely due to the lack of an equivalent of Flamenpolitik and the proportionally smaller geographical and demographic size of the occupied area. The result was only a few dozen sentences. Punishment involved imprisonment, deportation from the national territory, or death – often commuted, with no executions carried out in Belgium. Denunciation, spying, and working voluntarily for the Germans were the key crimes of which individuals were found guilty, and justice was often symbolic rather than extensive, such as the death sentences (later commuted) issued to the collaborators of the Gazette des Ardennes. In both liberated France and Belgium, the number of investigations was considerably greater than the number of convictions for collaboration, highlighting both the complex legal nature of collaboration and the difficulty in separating perceptions from reality. 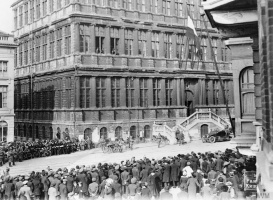