A minority of the adherents of the Flemish movement were willing to collaborate with the German occupier in the context of Flamenpolitik. This minority labelled themselves “activists”, stressing their dislike of the Belgian patriotic truce.

The nature of activisme's emergence in Belgium during World War I has been fiercely debated for decades. Flemish nationalists stressed its autonomous development, while their opponents presented it as a mere creation of the German occupier. Thanks to the groundbreaking work of historian Lode Wils, it is quite clear that Flamenpolitik was the prime mover, but that it of course only partially succeeded since it met fertile ground in the Flemish movement. An interplay of factors explains the relative receptivity for the Flamenpolitik: the growth of a Flemish sense of (sub)nationality in the decades before the war, frustration about the meagre results of the parliamentary strategy, völkisch notions of pan-Dutch and pan-Germanic affinity, distrust towards the allies France (out of fear of Belgium being subjugated) and Britain (due to the Boer War). However, the attractive power of collaboration remained relatively limited in the context of a harsh occupation regime. The rare activists were disliked by the vast majority of the Flemish population, who identified the activists with the German occupier. The “Dutchification” of the University of Ghent by the Germans in 1916 provoked activisme’s only real breakthrough. The number of overt supporters remained very limited (15,000 maximum in December 1917). Most of the adherents stemmed from the middle classes and often belonged to extra-parliamentary flamingant groups before the war. Particularly striking is the presence of a number of young avant-garde intellectuals and artists who would dominate Flemish cultural life in the interwar period like the poet Paul van Ostaijen (1896-1928). The activists might have been ideologically diverse, anti-clerical flamingants were more prone to join, since their parties had been in the opposition for three decades and they only formed minorities within their parties. Activisme consisted of different factions. Radical groups like Jong-Vlaanderen were overtly pan-Germanic and anti-Belgian and were supported by German annexationists. Others had a more cautious program in favour of Flemish “autonomy” within the Belgian state and were therefore supported by the Generalgouvernement.

Flemish support for the activists may have been very limited, but backing from the German occupier made activisme a considerable political factor. In order to give the movement some coherence and credibility, the German authorities created a kind of puppet organ in January 1917, the Raad van Vlaanderen (Council of Flanders), consisting of different activist groups. It was designed to voice Flemish demands on the international scene. The Raad van Vlaanderen was presented as a first step towards Flemish autonomy. A central propaganda service was founded and funded with Belgian taxpayers’ money in order to win over the Flemish population. The Raad van Vlaanderen was also helpful to staff the administrative separation between Flanders and Wallonia initiated by the Germans. Ultimately, the occupation entirely determined the Raad’s room for manoeuvre. Well aware of the activists’ weak position, the Germans blocked the activists’ more radical plans, like the replacement of the burgomasters, the creation of a Flemish gendarmerie or the annexation of Walloon communities into Flanders. The occupier also attenuated the Raad’s proclamation of Flanders’ independence on 22 December 1917 to “autonomy” in order not to endanger possible peace negotiations. At that occasion, they forced the Raad to organise “elections” to increase its legitimacy, which took the form of meetings that were outnumbered by counter-demonstrators. Belgian justice reacted by arresting August Borms (1878-1946) and Pieter Tack (1870-1943), two leading activists, for treason. The occupier released them and took repressive measures towards the judicial elites, which led to a strike of the Belgian magistracy. Reassured by the lack of any popular success of the activists, the Belgian government in exile did next to nothing to address the challenge of the Flamenpolitik. In the transition agreement of Loppem in November 1918 the Belgian elites managed to pacify the cleavage between capital and labour, but neglected to do the same in regard to linguistic tensions.

The passive attitude of most Belgian elites led to resentment among broad layers of the Flemish population that had strongly condemned the activist collaboration during the war, but wished to end the discrimination of both the Dutch language and Dutch speakers in Belgium. This resentment enabled a partial moral rehabilitation of the former activists in the Flemish movement. As a result, the legacy of activisme – anti-Belgian nationalism and authoritarianism – was able to structurally imbed itself in the Flemish movement. 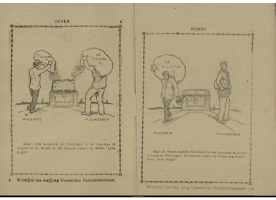