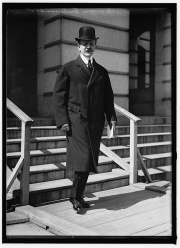 Count Bernstorff was German ambassador to the United States from 1908 to 1917. He tried in vain to warn the Reich government against unrestricted submarine warfare which would result in America’s entry into the war.

Johann Heinrich von Bernstorff (1862-1939) was born on 14 November 1862 in London where his father was Prussian ambassador. In 1892 he entered the diplomatic service and was delegated to Dresden, then to St. Petersburg, Munich, London, and Cairo. During all these stages of his career he pleaded for a détente with Great Britain.

Bernstorff’s Activities as German Ambassador to the United States↑

Bernstorff became German ambassador to the United States of America in 1908, a country which his superiors regarded as a second-rank power. Bernstorff was aware that this view was mistaken but he was unable to convince others of his position. He lost credit in the United States when Germany supplied arms to Mexico against the wishes of the United States government. After the outbreak of the First World War, President Woodrow Wilson (1856-1924) started a peace initiative and sent his confidant Colonel Edward M. House (1858-1938) to Germany. Great Britain was ready for negotiations, provided that Germany evacuated her troops from Belgium. Bernstorff recommended accepting this precondition. The German government, however, still believed in the possibility of a victory and did not listen to Bernstorff’s advice. After the German retreat from the Marne River, Bernstorff believed that there was no longer a chance for his country to win the war.

On 7 May 1915, a German submarine sank, without prior warning, the British passenger liner Lusitania on its way to New York. Almost 1,200 passengers died, among them more than 100 Americans. This act negatively influenced the United States’ attitude towards Germany. Bernstorff proposed in vain that Germany take responsibility for the deaths of passengers of neutral states in order to appease the American public. To Bernstorff, American neutrality was of vital interest to Germany. He succeeded in convincing the government of Reich Chancellor Theobald von Bethmann Hollweg (1856-1921) to take a stand against the reckless submarine warfare. The chancellor subdued the resistance of the leader of the Admiralty (Reichsmarineamt), Secretary of State Alfred von Tirpitz (1849-1930). Submarine warfare was then waged only in accordance with the traditional rules of sea warfare that limited the scope of destructive actions of submarines.

Bernstorff also tried to influence the German government to win over President Wilson to mediate a peace of negotiation and understanding. On the other hand, he helped to transfer money collected by Irish Americans to the leaders of the liberation movement in Ireland and hoped for an open conflict between the United States and Mexico. German clandestine support for Mexican activities against American interests did not go unnoticed and stoked anti-German sentiment in the United States. In addition, Bernstorff supported strikes that would hamper the supply of armaments to Great Britain. These actions were not legal but did no harm to his reputation in the eyes of the American government.

Whereas the Allies completely refused the German offer for peace on 12 December 1916, six days later President Wilson – who was still ready to act as an intermediary – made the proposal that both sides come out with their conditions for peace. The Allies did so but added that, in their opinion, this was not the right moment for action. Germany did not reply to Wilson’s request. Wilson then asked the German government to state its war aims confidentially, even mentioning that he aimed at a peace without victors. The German chancellor was unwilling to bind himself in a more definite way.

The strong influence of the German Supreme Command (Oberste Heeresleitung) and the Admiralty led to the declaration of unrestricted submarine warfare on 1 February 1917. Though Bernstorff warned against the serious consequences of this decision and the enormous resources of the United States, it was believed that this was the only way to avoid a German defeat. Bernstorff tried to make clear that this would lead America to enter the war on the side of the Allies. His proposal to at least put off the decision and to try to bring about a peace conference was completely ignored. Bethmann Hollweg had authorised Bernstorff to submit Germany’s peace conditions confidentially. But this came too late and President Wilson was not interested. On 3 February 1917 America broke off diplomatic relations with Germany. Two days later Bernstorff had to leave the country. On 6 April 1917 the United States declared war on Germany.

Back in Berlin, Bernstorff had talks with several influential Reichstag politicians, especially Matthias Erzberger (1875–1921), and spread the illusion that Wilson was still willing to mediate. This may have influenced Erzberger to prepare the Peace Resolution of 19 July 1917.

Bernstorff’s Activities as Ambassador in Constantinople↑

Bernstorff began receiving a pension in April but was called back to active service in August and nominated ambassador to the Ottoman Empire in Constantinople. In May 1918, he warned Turkey against invading the Transcaucasian Region as this was in violation of the conditions of the Treaty of Brest-Litovsk. He was asked by his superiors to protest against the persecution of the Armenians and to demand the return of those forced to leave their home region. He was also asked to propose amnesty for the Armenians. Bernstorff was, however, completely without success in his attempt. The Armenians themselves hoped for safety in the unification of Armenia and Georgia. Bernstorff was in favour of this idea but the foreign office declined it because it also was in violation of the conditions of the Brest-Litovsk treaty. He also favoured the idea to give some Palestine territory – though not in the form of a state – to the Jews.

When Bethmann Hollweg resigned, he proposed that Bernstorff become his successor but both Wilhelm II, German Emperor (1859-1941) and General Erich Ludendorff (1865-1937) were against him. They did not like his political opinions and suspected him to be a democrat.

Bernstorff’s Activities in the Weimar Republic↑

When the war came to an end, Bernstorff helped prepare the truce and peace negotiations. In 1919 he refused the offer of Reich President Friedrich Ebert (1871-1925) to become foreign minister in the Weimar Republic. In 1920 he was pensioned off provisionally and retired completely in 1927. He joined the Democratic Party and was a member of the Reichstag from 1921 to 1928. In 1922 he became president of the German league for the League of Nations. As of 1926 he was also a permanent German representative at the commission of the League of Nations for preparing general disarmament and was a member of all German delegations to the League. After 1932 he lived in Switzerland. 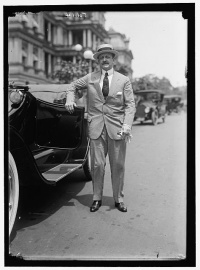