During the First World War the German government made extensive use of submarines, initially against warships and then, as the war progressed, most heavily against merchant shipping. However, the sinking of neutral merchantmen eventually led to diplomatic crises with neutral nations and to war between Germany and the United States.

The Development of Submarine Warfare↑

Ironically the nation that would become synonymous with submarine warfare put comparatively little effort into building their submarine arm in the years before the First World War. The German fleet constructed by Alfred Peter Friedrich von Tirpitz (1849-1930) was intended as a showpiece depicting German power and as a blue water battle fleet. The Germans did develop submarines in the years before the war but they only possessed twenty-eight of them when war broke out in 1914.[1] The German Admiralty Staff saw these weapons as key components in what they called Kleinkrieg, a form of naval “guerrilla” warfare in which light craft such as submarines and torpedo boats would be used in continual attacks against the stronger British fleet once the latter instituted a close blockade of Germany’s ports. In the actual course of events, the British did not implement a close blockade, opting instead for a distant blockade at the exits to the North Sea. With their initial purpose foiled, the German submarines were sent on patrols into the North Sea to attack British warships. They enjoyed occasional successes, the most significant of which came in September 1914 when Lieutenant Otto Eduard Weddigen (1882-1915) was able to ambush and sink three obsolete British cruisers. Additional successes came in the tight waters around the Dardanelles Straits in early 1915, but for the most part the submarines proved too fragile on the surface and too slow when submerged to be of much use against modern warships.

Some submarine commanders preferred to hunt enemy merchant ships instead. The use of warships against commerce, or guerre de course, was governed by a series of rules designed to safeguard the lives of merchant seamen. Warships were allowed to stop, search and capture or sink enemy merchant ships, but only after ascertaining that the ship was carrying contraband (a flexible term roughly meaning goods that could be used for military purposes) and making proper provision for the survival of the crew of the merchantman. The British, of course, took countermeasures to protect their merchant shipping. One such measure was to begin installing deck guns on their merchant ships which would allow the merchantman to open fire on a surfaced submarine. Early war German submarines had such light armament that they could be outgunned by even a lightly armed merchantman. Another British countermeasure was the creation of vessels known as Q-ships. These vessels were merchantmen equipped with concealed guns that would attack any enemy submarine that approached them. Taken together these measures made following the rules of commerce warfare extremely hazardous for German submariners. The British further muddied the waters for German submarine commanders by flying the flags of neutral countries instead of their own flag, thus passing themselves off as neutrals.

In response to these measures, and using the British blockade as justification, the German government gave its submariners permission to attack enemy, and neutral shipping without adhering to prize rules. In particular, they were encouraged to attack their targets without warning. This came to be known as unrestricted submarine warfare, and a campaign was launched on 4 February 1915. The waters around Great Britain were proclaimed a war zone and the German government announced that any and all enemy shipping in the area would be subject to being sunk without warning. It was also noted that it would not always be possible to distinguish between enemy and neutral shipping and that neutral ships would likely be sunk as well.

The foreign reaction to the German campaign was resoundingly negative. The British, of course, quickly condemned the campaign as an illegal act of piracy. More important were the reactions of the major neutrals, who also objected to the legality of the new campaign. The most significant neutral was the United States. The sinking of the British passenger liner Lusitania happened in April 1915, just three months into the campaign. That sinking led to strong American protests against the submarine campaign. American pressure led at first to modifications to the campaign, in particular to attempts to exclude passenger liners and hospital ships from attack. When the incidents continued, the submarines were first moved out of the Atlantic and into the Mediterranean, where there was very little American traffic. When Reinhard Scheer (1863-1928) took over as commander of the High Seas Fleet in 1916, he ordered the submarines back to the North Sea where they were once again to be used in support of the High Seas Fleet.

The submarines were no more effective attacking modern warships under Scheer than they had been earlier. As the war dragged on into the winter of 1916-17 with no end in sight, and the potato crop failed, bringing on what became known as the “Turnip Winter”, the increasingly desperate German government turned back to the idea of unrestricted submarine warfare. By February 1917, the Germans had over 100 submarines available and Admiral Henning von Holtzendorff (1853-1919) presented information demonstrating that if those submarines could sink 600,000 tons of British and Allied shipping every month for six months that Britain would have to surrender as they no longer would have enough shipping to import the necessary amount of food to feed its people. Unrestricted submarine warfare resumed on 1 February 1917.

Now, with roughly thirty submarines at sea at a time, the Germans enjoyed enormous success. In February, the Germans sank 520,412 tons of shipping; in March they sank 564,497 tons and in April they sank a phenomenal 860,334 tons.[2] Out of desperation the British began to institute a convoy system to protect their merchantmen. Eventually the convoy system would prove effective but it took time to organize and fully implement it and in the meantime the submarines continued their depredations. In May, they sank 616,316 tons; in June 696,725 tons and in July, as convoys became widespread, 555,514 tons.[3] The submarines had reached their goal but the British had not surrendered; indeed, the campaign added the United States to Germany’s list of enemies. An angry President Woodrow Wilson (1856-1924) sought and received a declaration of war on Germany in April 1917. Germany would remain in the war but the defeat of the submarine campaign sealed the nation’s fate. In November 1918, a new German government would recognize their defeat and end the war.

The Different Types of German Submarines↑

The Germans used primarily three types of submarines during the war, the U-boat, large fleet boats, and two smaller classes, the UB and UC boats. All of these craft developed over the course of the war as experience led to changes in design. By the time that the second unrestricted campaign began in 1917, a representative fleet boat had the following specifications: they displaced 837 tons, could reach speeds of seventeen knots on the surface and eight when submerged, mounted a 10.5cm deck gun and carried between twelve and sixteen torpedoes.[4] The UB class, which was designed for work in the narrower waters around the British coast, was significantly smaller. By the end of the war these ships displaced 500 tons, could reach 13 knots on the surface and nearly eight submerged, mounted an 8.8cm gun and carried ten torpedoes. They were accompanied by a class of submarine minelayers, the UC class, which displaced just over 400 tons, could travel at eleven knots on the surface and nearly seven submerged, mounted an 8.8cm gun, and carried seven torpedoes along with eighteen mines.[5] In addition to the primary three classes the Germans also experimented with merchant submarines designed to sneak past the blockade but they were ineffective and only six were built.[6]

In the end the German submarines had an enormous impact on the war. Over the course of the war German submarines sank 6,394 ships displacing a combined total of 11,948,702 tons. In exchange they lost 229 submarines for an average of nearly 52,000 tons sunk per submarine.[7] Despite that enormous level of damage and the hopes invested in them by the German government, the submarines of World War One lacked the ability to win the war. They were decisive though; by bringing the world’s most powerful neutral into the war they sealed Germany’s defeat. 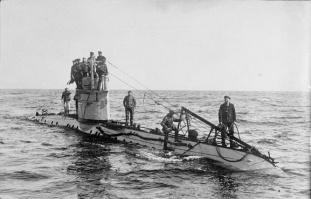 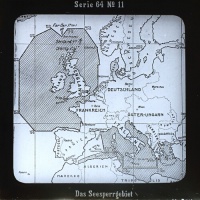 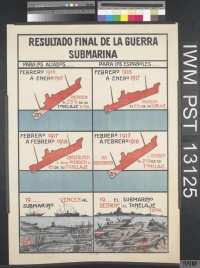