Between 1914 and 1918, the machine gun played an ever-increasing role on the battlefield. Today, even though artillery was responsible for the majority of deaths, the machine gun is the weapon most commonly associated with the First World War in the popular imagination. This overestimates its importance, but also fails to comprehend real advances made in the field of automatic weapons during the First World War.

The machine gun was a product of the "second industrial revolution". Its development was initiated by American-born Hiram Maxim’s (1840-1916) invention of the first automatic firearm in 1883. By harnessing the energy released in firing a cartridge, Maxim produced a weapon capable of discharging multiple bullets by simply activating a trigger. His innovation prompted wider development of automatic firearms. From the late 1880s, their military potential was hugely enhanced by the availability of small-calibre, smokeless cartridges.

By 1914, all the major combatants had furnished their armies with machine guns on similar scales of issue. Russia, Germany and Britain used guns based on the Maxim system, while France and Austria-Hungary used indigenous designs – the Model 1907 "St Etienne" and the Schwarzlose respectively.

The German army had been a late convert to the potential of machine guns, but its tactical employment of them in 1914 proved superior to that of its enemies. German machine gunners exploited the weapon’s long-range accuracy, and the fact that the guns were a regimental (rather than battalion) asset allowed them to be grouped to achieve maximum effect. This efficiency created a myth that Germany deployed far more machine guns than its opponents in 1914.

Following the onset of positional warfare, machine guns gained notoriety as highly effective direct-fire weapons. They could theoretically fire over 500 rounds per minute (rpm), but this was not normal in combat, where "rapid fire" generally consisted of repeated bursts amounting to 250 rpm. The effectiveness of these bursts of between ten and fifty bullets was enhanced by exploitation of ballistics and the precision offered by firing from adjustable mounts. At ranges of 600 meters or less, machine guns could create fixed lines of fire which would never rise higher than a man's head, with deadly results for those attempting to advance across them. Or the gun could be traversed between bursts to offer what the French called feu fauchant (mowing fire). At longer range, their bullets fell in an elliptical "beaten-zone", giving them an area-fire capability.

Groups of guns could interlock their fire. In favourable circumstances, such as at Loos on 26 September 1915, or on the Somme on 1 July 1916, this could prove devastating. But although this is how machine guns are now best remembered, new methods of using them were developed from 1915 onwards.

In October 1915, the British army placed all its Vickers machine guns under the control of a newly created Machine Gun Corps (a development replicated in the Dominion contingents on the Western Front). This radical and controversial step was taken to regularize something which had become a tactical necessity: the grouping of machine guns in combat. But, with all the army’s machine gun experts in one corps, it also stimulated innovation.

The most notable outcome was the machine gun barrage. Groups of guns, centrally controlled, were used to fire upon pre-plotted target areas. By exploiting the curved trajectory followed by their bullets, machine guns could fire indirectly, like miniature artillery pieces – even over the heads of friendly troops. These techniques required accurate maps and a firm basis of mathematical calculation. Importantly, given that the strategic imperatives of the Western Front forced the British onto the offensive, they meant that machine guns could be used to support attacks.

Machine gun fire was used to "thicken" the meticulously planned artillery barrages that preceded British and Dominion assaults, such as those at Vimy and the Messines ridges in April and June 1917. Even more crucial tactically were "SOS barrages", fired in response to flares sent up by infantry facing enemy counterattacks. SOS barrages exploited the "beaten-zone" of long-range machine gun fire to saturate pre-registered areas over which counterattacking forces were likely to advance.

Other armies began to adopt this "scientific" form of machine-gunnery, both the French army and the German army’s specialist Machine Gun Marksmen detachments began to use indirect and overhead fire during late 1917. The American Expeditionary Forces also employed it during 1918.

All armies were united in a desire to equip their troops with as many machine guns as possible. This was not achieved without effort. Britain and Russia were hampered by inadequate manufacturing bases, which only the former was able to overcome. France was able to augment and eventually supplant its M1907 gun with a far superior weapon made by Hotchkiss of Paris. Germany began with the best manufacturing infrastructure and went furthest in making the machine gun the chief provider of infantry firepower. By 1917, some German formations were reporting that machine guns consumed as much as 90 percent of their small arms ammunition.[1] The less industrially developed powers were obliged to purchase machine guns from their allies; only Italy possessed a limited production capacity.

Automatic weapons technology underlay one of the First World War’s most lasting doctrinal innovations – the provision of automatic firepower for small units. Armies swiftly identified a requirement for portable automatic weapons that could be carried into the attack to suppress enemy defensive fire. Britain was lucky enough to have just such a weapon – the Lewis Gun – entering commercial production as the war began. France put a pre-war experimental automatic rifle, the CSRG, into production. By 1916, both armies had begun to deploy these weapons at platoon level.

Germany took longer to develop a light machine gun. The demands of its war economy meant that the weapon had to be based upon the existing MG08 machine gun. The result was the MG08/15, which appeared in early 1917. This was more cumbersome than its Allied counterparts, but could potentially deliver more firepower. It became the most common German machine gun – intensifying the growth in machine gun use by the German army. On the Marne in 1914, the Germans deployed 3.5 machine guns per kilometre of front; in the same area in 1918, the figure per kilometre was 31.5.[2] During the autumn of 1918, machine guns provided the core of every German defensive deployment.

Small unit tactics changed profoundly as light machine guns and automatic rifles took their place with hand grenades and grenade launchers alongside the traditional rifle and bayonet. Their presence permitted independent action by platoons, facilitating the development of more flexible infantry tactics. These advances originated on the Western Front, but were followed elsewhere. Russia tried to set up production of the Danish Madsen light machine gun; Austria-Hungary produced light mounts for its Schwarzlose gun; and Italy adopted the curious Villar-Perosa machine pistol. The latter was the precursor of what we now know as the submachine gun – more developed examples of which saw very limited service in Italian and German hands in late 1918.

The American Expeditionary Forces adopted the weapons and the tactics of the Allies, but the USA also had indigenous weapons under development. A machine gun and automatic rifle – both designed by John M. Browning (1855-1926) – saw service during the last few weeks of the war.

No figures exist for the number of "gunshot wound" casualties caused by machine guns, but their establishment as the chief vector of infantry firepower suggests that the proportion was vastly higher than that caused by rifle-fire. The First World War saw the machine gun reach its zenith as a battlefield weapon. In later wars, it would find itself both threatened and supplanted by other weapon-systems, notably the mortar. The development of portable automatic weapons for the infantry was, however, to have a lasting legacy, forming the basis of small-unit tactics up to modern times. 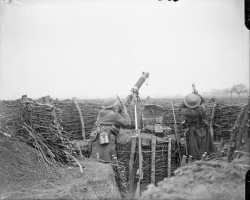 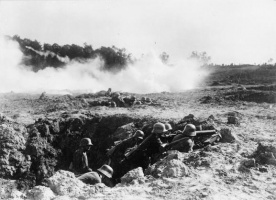 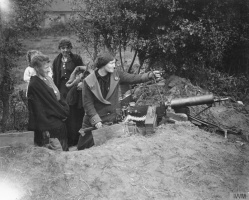