The rifle was by far the most common weapon used in the world war. When the major powers entered the conflict, they possessed around 11 million rifles. During the war, they either manufactured or imported 30 million more.

In Europe, the rifle with a fixable bayonet was the standard weapon of the infantry, the largest and most important branch of the armed forces from the end of the 17th century on. In the second half of the 19th century, engineers succeeded in greatly improving the performance of military service rifles. Through the general introduction of the rifled barrel and the reduction of the caliber, accuracy and firing distance were greatly improved. France’s adoption of a new rifle that used nitrocellulose powder in 1886 represented a large advancement in weapons technology. While black powder was simply a mix of basic ingredients, the new propellant was developed on the basis of nitrocellulose in chemical factories. In a slight exaggeration, it was referred to at that time as “smokeless powder”. Indeed, this alluded to its most important feature – its lack of white smoke - for even in long firefights, the guns were no longer engulfed in thick white clouds of smoke that simultaneously obscured the rifleman’s view and gave away his location. This development had far-reaching effects, including the transition to field uniforms in muted and inconspicuous colors, which most armies had carried out by 1914.

The rifles used in the First World War were developed between 1886 and 1903. The diameter of the barrel fluctuated between 6.5 millimeters and eight millimeters. The magazine contained between three and ten cartridges, although it typically had five. The weapon featured a manually operated locking mechanism located at the end of the barrel. In the rifle’s loading action, the empty case was drawn out and ejected; a new cartridge was then fed into the chamber and the firing pin was cocked for the next shot.

Among the various countries participating in the war, there was no appreciable difference in the rifles. The continental European armies’ infantry rifles were 125 to 130 centimeters long. In addition, there were shorter versions, known as carbines, with lengths ranging between ninety and 110 centimetes. These were intended for troops who carried small arms for self-defense or needed a weapon that was as unobtrusive as possible during their duties in the cavalry or artillery, as machine gunners, or in supply formations.

During the war, these shorter weapons were also used by the trench infantry because they were convenient. All of Great Britain’s and the United States' armed forces carried a standard weapon from the beginning.

The Role of the Rifle in the First World War↑

In the first phase of the war, the infantries’ firepower continued to come primarily from rifles. In 1914, there was an average of only two machine guns for every thousand riflemen. This ratio quickly shifted in favor of fully automatic weapons. Nonetheless, infantrymen who did not work with crew-served weaponry such as machine guns, trench artillery or trench mortars still needed to be equipped with rifles.

Although no battle in the First World War was decided by riflemen, no battle could have been fought without them. The rifle was and remained the primary weapon for combat troops. The rifle’s availability in sufficient numbers was the precondition for the use of special high performance weaponry. The rifle had neither the firepower of a machine gun, nor the total impact of a piece of artillery or the particular effect of a hand grenade. Nonetheless, on the whole, it combined a number of unique features: availability on a wide scale, ability to be used by a single person, portability, logistical simplicity and great reliability. It was able to create a threatening space several hundred meters in front of its muzzle. In trench warfare, hidden and lurking riflemen helped create an atmosphere of pervasive danger. While machine guns and heavy weaponry could seal off access to a position, rifles were needed, and are still needed, for either holding or capturing and occupying the position.

In the first phase of the war, there were still men available to offset the enormous losses and to increase the size of the armies. However, weapons were scarce. The peacetime preparations for expanding mass production in the event of war proved to be wholly inadequate. In 1914/1915, there was a serious shortage of rifles in all countries. Intensive efforts were thus made to expand mass production. In Germany, this resulted in a resounding success. By the end of the war, the rifle depots were overflowing – albeit there were no longer enough soldiers to give them to. In August 1915, there was one modern eight millimeter rifle for 6.8 soldiers in replacement units; three years later, there were 2.2 of such rifles, which were typically brand-new, for each soldier.

Whenever possible, the weapons of either wounded or fallen soldiers were gathered and returned to the home front to be repaired and reissued. The quantity of these weapons was considerable. In Germany, so-called battlefield arms made up nearly half of new production during the war. One of the reasons for the chronic shortage of rifles in the Russian army was because of the late introduction of an effective policy for the collection of arms after battles.

The First World War shed light on weapon systems such as heavy artillery, airplanes and tanks. However, the rifle’s significance for large, battle-ready armed forces persisted. For this reason, the victors not only strictly limited Germany’s control of modern high performance weaponry, but also its possession of small arms. The 100,000-man army of the Weimar Republic was only permitted 84,000 rifles and 18,000 carbines. At the behest of the Allies, 6 million rifles in Germany were destroyed.

In the 21st century, familiarization with the rifle still represents a central aspect of the military socialization of young soldiers – even if these weapons no longer play a large role in military conflicts. An end to this practice is not in sight. In low intensity conflicts, which are typical for modern warfare, the rifle, which now is almost without exception a fully automatic weapon, continues to prove its worth. 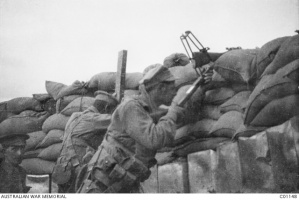 Periscope rifle in use at Gallipoli 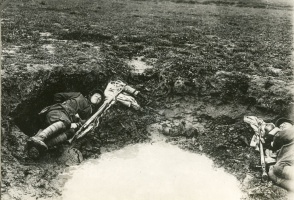 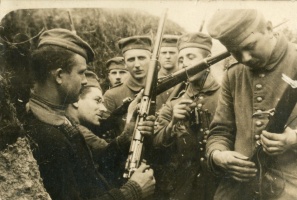 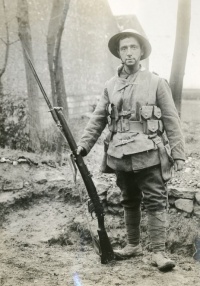 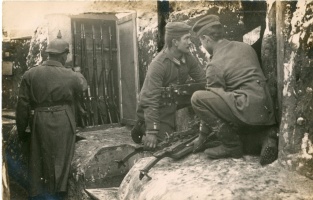 A machine gun position on the front 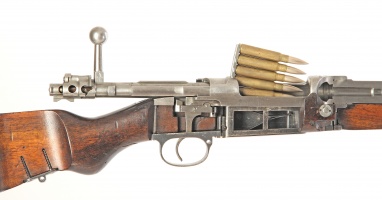