Albert I, King of the Belgians

Albert I, the third king of the Belgians, played a leading role as supreme commander of the Belgian army during the First World War. For four years he defended the last piece of unoccupied Belgium behind the Yser River, refusing to sacrifice his troops in bloody attacks and hoping that the war could be ended through negotiations.

Albert I, King of the Belgians (1875-1934) was the third king of the Belgians. At his birth, no one expected that he would ever reign. However, because Leopold II, King of the Belgians’ (1835-1909) only son as well as his brother and nephew (Albert’s father and brother, respectively) all died before King Leopold’s own death in 1909, Albert ascended to the throne. He was married to Elisabeth of Bavaria, Queen of the Belgians (1876-1965), and had three children: Leopold III, King of the Belgians (1901-1983), Charles, Count of Flanders (1903-1983) and Maria José, Queen, consort of Humbert II, King of Italy (1906-2001). As a constitutional monarch in a parliamentary democracy, Albert played the role of a mediator in the political problems of his day, among others the introduction of universal "one man one vote" suffrage, the language question, the economic crisis and the strengthening of national defence. Albert would, however, go down in history primarily for his leading role in 1914-1918 during the First World War.

Supreme Commander of a Neutral State↑

During the war, Albert assumed command of the Belgian army. For four years he held his ground in a small, unoccupied area behind the Yser River in the westernmost part of the country. Already during the war he was known – as seen in King Albert’s Book (Christmas 1914) – as the brave knight-king of "little Belgium", who would achieve undying military fame for himself and his army. Historical research shows that during the war, Albert adopted a position in keeping with the status of Belgium, created in 1831 as a neutral state, and intended to help maintain the balance of power in Europe. Albert and his government refused to accede to the German demand, made on 2 August 1914, to march through Belgium in order to attack France.

The king decided to take personal command of the army, surrounded by his general staff and military advisers but without ministerial responsibility for the conduct of the war. Albert was no strategist. Like the heads of states of other nations at war, he could have delegated the command to the chief of general staff. He knew that he was taking a heavy responsibility upon his shoulders. "I will be held responsible for the misfortunes of the country", he wrote.[1] Yet the king did not want to hand over command of the war to anyone else. He feared that his government would align Belgium too closely with the French and British camp.

Albert was convinced that the army of a neutral state such as Belgium could not simply rally behind the military objectives of France and Great Britain – to defeat Germany, recapture Alsace-Lorraine and safeguard the British Empire. The Belgian army’s sole mandate was to fight for the liberation of its own territory and re-establish the country’s independence. The king also mistrusted the military commanders. He knew that many generals adhered to the French doctrine that victory in war depended on the moral strength of the army, the will to defeat the enemy by engaging in attack after attack. Albert and his military advisor Emile Galet (1870-1940), by contrast, took the principle of the true balance of power as their starting point, according to which a small army could not engage in offensives that had no real prospect of success.

Guarding His Army against Bloody Battles↑

In his war diaries, the king continually expressed his abhorrence for the hecatombs perpetrated at Verdun, the Somme or Passchendaele. He refused to sacrifice his troops and thereby endanger the future of his country. Preventing unnecessary bloodshed was a matter of conscience. For four years, the Belgian army played a largely defensive role, repelling the often bloody attacks by the German army from the flooded Yser estuary – from Nieuwpoort through Diksmuide to the canal to Ypres – and striving to prevent them from reaching the ports. Throughout the war, the king stood by his soldiers and remained in De Panne, a small coastal town on the French border.

Albert’s ministers had moved their base to the northern French town of Sainte-Adresse (Le Havre), and Albert kept in close contact with them, including through the meetings of the council of ministers that took place in Belgium. But when it came to military decision-making, Albert would not countenance any ministerial responsibility. This greatly displeased Prime Minister Charles de Broqueville (1860-1940), who unsuccessfully engaged in conflict over this as late as 1918 and was forced, partly for this reason, to resign. Albert also refused in several instances to grant the requests with which the French and British assailed him in De Panne, namely, that he place the Belgian army under Allied command. Each time, Albert invoked constitutional reasons: "The Constitution forbids me to do so". In reality, his stance was based on the political and moral grounds cited above.

Hoping for Peace through Negotiations↑

From 1915 onward, Albert no longer believed that weapons would bring peace. Despite the thousands of soldiers who had already been sent into the line of fire, the front still held. The king feared that even if the Allies succeeded in pushing the Germans out of Belgium by force of arms, the whole country would be laid waste. He soon became convinced that it would be better to end the war through negotiations and a compromise that did not result in victors and vanquished. Yet when it came to peace initiatives, the king was dependent on his government. However, the latter had rallied completely around the Franco-British standpoint and even nurtured annexationist ambitions for the period following a military victory. That did not prevent Albert from engaging in a sort of family diplomacy without his ministers’ knowledge as early as autumn 1915.

Albert agreed in late 1915 and early 1916 that tentative discussions be held in Zürich between his confidant, the Brussels professor Emile Waxweiler (1867-1916), and the German diplomat Hans-Veit zu Toerring-Jettenbach (1862-1927), who also happened to be Albert’s brother-in-law, being married to one of Queen Elisabeth’s sisters. Albert wanted to discover the conditions under which the Germans might be prepared to restore Belgium’s independence and territorial integrity. The aim was not to sign a separate peace but, should the conditions prove acceptable, to persuade the French and the British that Belgium need not be liberated by military might. Albert could then thwart Paris and London’s alibi that they were fighting for the liberation of Belgium, so as to lead them, too, along the path towards peace.

Proposals and counterproposals were put on the table, but satisfactory promises were not forthcoming. When Waxweiler died in a traffic accident in London in June 1916, Albert wanted the talks to go on. He called upon Charles Lagrange (1851-1932), his former professor at the Royal Military School. During the war, Lagrange was regularly the king’s guest in De Panne. He was an astronomer and author of pseudo-scientific publications inspired by the writings of Nicolas Brück (1818-1870). He developed a form of religious determinism and was convinced that God’s plan for the world could be found in the Bible. There is evidence that Lagrange’s concepts influenced Albert, and most certainly his advisor Emile Galet. From the latter’s diaries it appears that in the conversations with King Albert, texts from the Old Testament, and in particular from the Prophets, were frequently referred to when taking important decisions. Albert’s trust in Lagrange is evident as well from his request that he engage in talks with the Germans on his behalf. Lagrange refused, however, as he was convinced that secret talks with the Germans, behind the backs of the Belgian ministers, was a dangerous course of action.

Albert continued to hope that the seemingly endless war would bring the fighting parties to rethink their positions. He believed that Belgium had to take advantage of the peace initiatives on offer, and sought to win over his minister of foreign affairs. The holder of that portfolio was in an unenviable position: it was impossible for him to please both the king in De Panne, who was suing for peace, and the ministers in Le Havre, who were much more in line with the Allies and of whom many were jusqu’auboutistes (advocates of fighting until the end). The fact that the post had changed hands four times in four years – Julien Davignon (1854-1916), Eugène Beyens (1855-1934), de Broqueville and Paul Hymans (1865-1941) – indicates how hard Albert tried to make his mark on foreign policy. The longer the war dragged on, the more sceptical and pessimistic the king became. Albert tried to persuade not only his ministers but also the Allies that continuing the war would only lead to more bloodshed and to more dead and injured, and possibly even – as in 1917 in Russia – to revolutions and the fall of the West. His attempts foundered, however, and only brought him accusations of defeatism.

Only in September 1918, when it seemed that the joint Allied offensive had a chance of success, did the king lift his constitutional objections and allow the Belgian army to join the Group of Armies of Flanders (GAF) and participate in the liberation of Belgium. This was an example of the king’s pragmatism, who was able to adapt to changing circumstances. On 11 November 1918, the armistice was signed. Albert now emerged from the war as the knight-king with an enhanced prestige that would radiate throughout the rest of his reign.

In the post-war years, Albert was able to exercise his authority in the often extremely difficult government formation processes. As early as 1918, it was in part thanks to his influence that a three-party government was established in Loppem that was prepared to introduce universal "one man, one vote" suffrage without the need for a constitutional amendment, thereby avoiding serious political tension. Throughout the interwar period, the political agenda was dominated largely by the financial and economic crisis and the linguistic dispute between the Flemish and francophone Belgians. In order to overcome the crisis, Albert did not hesitate to urge his ministers to take a firm line, among other things by asking parliament for special powers. In the quest for compromise on language legislation, the king played the role of defender of the country’s unity.

When Albert tragically died on 17 February 1934 in a mountain climbing accident in Marche-les-Dames (Belgium), the population deplored the death of this highly respected king as a great loss. 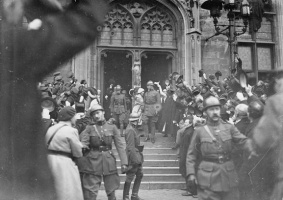