Alsace-Lorraine was a border region located between the Rhine River and the Vosges Mountains. Its role in French wartime propaganda, its geographic location, and its tumultuous recent history all combined to give the region a distinct experience of the First World War. When the war ended, Alsace-Lorraine, a part of the German Empire since 1871, was returned to France.

Alsace-Lorraine, a geopolitical amalgam consisting of the former French departments of Bas-Rhin, Haut-Rhin and Moselle, was annexed by the newly-unified German Empire following its victory over France in 1871. The change of nationality, imposition of Germanization policies, and arrival of 120,000 German settlers to the so-called Reichsland (“imperial land”) had at first been opposed by local notables and religious leaders who clung to the hope that France would one day reclaim its “lost provinces”. Francophile elites continued to promote French culture and language under the guise of Alsatian regionalism, but by 1914 most of the nearly 1.9 million inhabitants in the region had resigned themselves to their fate. Alsace-Lorraine had been relatively well integrated into the German Empire, and a new constitution in 1911 had granted it more autonomy,[1] although tensions had flared up in 1913 during the infamous Zabern Affair.[2]

A Borderland at War↑

In general, the war was greeted in Alsace-Lorraine with indifference.[3] Nonetheless, nearly 380,000 Alsatian and Lorrainer men fought for Germany. These recruits tended to be viewed with suspicion by the German High Command, which decided in March 1915, after a spate of desertions, that soldiers from Alsace-Lorraine would serve in the German interior or, more commonly, on the Eastern Front or in the navy.[4] Desertion rates remained relatively high.[5] Thousands of men from Alsace-Lorraine fled to Switzerland and France, and approximately 17,500 volunteered in the French army.

Several major military offensives took place in the region. The battles of Sarrebourg and Morhange destroyed parts of Lorraine in mid-August 1914. Earlier in the month French troops had taken Mulhouse, but had been pushed back by a German counter-offensive by the end of August. The French nonetheless maintained a foothold in Alsace for the duration of the war. In 1915, the Vosges were the site of the particularly brutal battles of Hartmannswillerkopf and the Linge, which became the site of a large French war memorial, museum and cemetery.

Like the rest of the German Empire, Alsace-Lorraine’s home front experienced great hardships and privations, including martial law, food shortages, and rationing. In areas located in relative proximity to combat zones, private property was requisitioned, forests and vineyards were destroyed to set up fortifications, and local residents were evacuated. Thousands of refugees arrived in Strasbourg. By 1917, civilians in urban centres suffered from a lack of basic necessities, a situation that allowed Spanish influenza to take an enormous toll a year later.[6] Unemployment and inflation also devastated the region. Most factories were moved to the German interior, investment in local industry dried up, and remaining capital was transferred into military production. Female employment was especially hard-hit by the collapse of textile production,[7] prompting working-class Alsatian women to relocate to other parts of the Reich to work in munition factories.[8]

Ethnic tensions in the region exacerbated local discontent. Although men and women worked tirelessly for the war effort, German fears of disloyalty and treason extended to Alsace-Lorraine’s civilian population. Germanization policies were reinvigorated, with Governor Johann von Dallwitz (1855-1919) declaring in 1914 that an “iron broom” would remove anti-German sentiment from the region.[9] The use of the French language was banned. Thousands of inhabitants were imprisoned for a variety of offences, from singing the Marseillaise or wearing a cocarde, to spreading false rumours or providing intelligence to the enemy. Thousands more who were considered pro-French were placed in “preventative detention” camps.

Although France had not gone to war specifically to win back Alsace-Lorraine,[10] the region nonetheless became an important symbol in French and other Allied wartime propaganda. Posters, pamphlets, patriotic songs and plays often exaggerated the Germans’ mistreatment of the region, and called for the “liberation” of France’s “lost sisters”.[11] Yet fears that some Alsatians and Lorrainers were dangerously pro-German prompted French military authorities in the occupied zones around Thann, Masevaux and Altkirch to intern local inhabitants in camps across the country.[12] Stories of the camps were used by the Germans to discredit the French, but ultimately Alsace-Lorraine did not feature in German wartime propaganda.

The End of War and the Return to France↑

In November 1918, in the chaos of Germany’s defeat, soldiers’ and workers’ councils were established in Strasbourg, Colmar and Mulhouse. Within days they were disbanded, as French troops marched into the region, to the cheers of local inhabitants exhausted by years of privation. This enthusiasm was understood by the French as an unofficial plebiscite in favour of the region being returned to France. But the challenges of reintegrating Alsatians and Lorrainers into the French nation would prove far more complicated than anticipated.

Caught between France and Germany, Alsace-Lorraine’s experience of the First World War is poignantly commemorated by the war memorial in Strasbourg’s Place de la République, in which a grief-stricken mother cradles her two fallen sons. 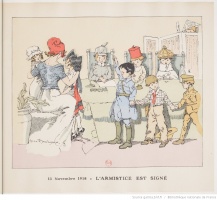 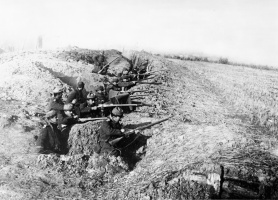 French troops on the Alsace-Lorraine Front, 1915 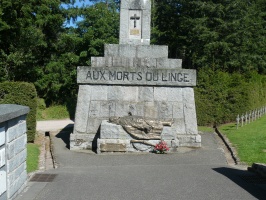 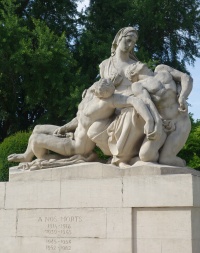