During World War I, about 2 million French citizens had to leave their homes, due to orders from the French military and administrative authorities, the German invasion, German shellings, or repatriation ordered by German authorities from the ten partially or wholly invaded departments. French refugees within France existed not because of one massive exodus, but because of a succession of displacements between 1914 and 1919.

French refugees fell into three categories: those who left their homes, those who were liberated from occupied areas sent to the interior, and those who were repatriated by the Germans. The first included civilians who set out alone to escape the invasion of summer 1914, the German offensive of spring 1918 in Picardy, or German shelling (i.e. residents of Reims, experiencing constant shelling since 1914). There were also inhabitants of places inside the zone of operations who were directed towards the zone of the interior by decision of the military or administrative authorities. For instance, during the first days of the war, residents of strongholds such as Toul, Longwy, Verdun, Epinal, or Belfort were evacuated, having been seen as "useless mouths to feed."

The second category consisted of people who had been liberated. Following the German retreat to the Hindenburg Line in spring 1917, the inhabitants of the "recovered" regions in Oise, Somme, and Pas-de-Calais were sent to the interior. This pattern was repeated in autumn 1917, when the British victories in the Cambrai area enabled the liberation of many communities, as well as during summer and autumn 1918, when the Allied troops advanced.

The third category covered people who were repatriated - that is, those people in the partially or wholly (the Ardennes) German-occupied regions who were authorized to return to France via Switzerland and Haute-Savoie (Annemasse, then Evian). In all, 500,000 people were repatriated through Switzerland to France between October 1914 and 1919.

According to a declaration by the minister of the interior to the Chamber of Deputies on 12 January 1917, the total number of refugees in France reached 150,000 by the end of August 1914. By 1 January 1915 the number exceeded 500,000. After a large increase in 1915, from 560,000 to 910,000 refugees, growth slowed for the following two years. The millionth refugee was noted in December 1916, and in December 1917 the total number of refugees was estimated at 1.25 million. The number peaked in September 1918, with 1.85 million refugees. The circular of 20 October 1922, which brought refugee services in the Ministry of the Interior to an end, reported the figure of 2 million people during the Great War.

In general terms, refugees did not want to go too far from their homes. The French authorities, however, disregarded this wish. The authorities tried to limit demographic pressures in the regions nearest the front, and thus they sent refugees to the interior. The repatriated refugees who arrived in large groups were also dispersed throughout the region. As a result, all regions took in refugees and settled them throughout their communities. In most cases, however, the refugees were unwilling to live in the countryside, where they felt isolated and where group solidarity weakened. They wanted to settle in the largest cities.

The figure of the refugee embodied the suffering endured by civilians during the war. When the war broke out, there could be no question of not coming to refugees' aid. Public authorities and charitable organizations also helped establish aid. Throughout the war, the French government was under pressure from the elected representatives of the invaded regions to establish a regulatory and legislative authority to deal with refugees. In addition to receiving state help, refugees were also supported by a multitude of independent organizations, responding to appeals launched by public figures, e.g. the Foyer Franco-Belge, or the Franco-Belgian Home, with the writer André Gide (1869–1951). Refugees also organized themselves. Ten national committees were established for French refugees, e.g. the Committee for Refugees in the Nord region.

After the initial favorable response to calls from public figures to help refugees in 1914, the end of 1915 and the beginning of 1916 appeared to be a turning point: Refugees came up against a certain hostility from local populations. There were various reasons for this hostility. The distribution of grants paid to refugees was criticized. Refugees who worked were seen as competitors in the labor market. Linguistic differences proved to be a barrier between refugees and their hosts, especially when the concerned groups still spoke in patois. Cultural differences were particularly marked when the refugees were transplanted into the French Midi. Local people feared that the refugees’ presence would be a destabilizing force for their communities and complained about their rough behavior, even delinquency. Finally, one key to the tension between refugees and locals lay in a derogatory term used for refugees: "the boches [Germans] of the North." Rumors about the associations, sexual or otherwise, that had developed between the local populations and the Germans in occupied France threw doubt on the thousands of evacuees who poured into free France. They were suspected, in some way, of being "Germanized."

Because of this growing hostility, refugees longed to return home, but at the end of the war they were faced with transport difficulties, control imposed by French authorities, and difficulties with rebuilding a pattern of life in regions very heavily scarred by the war.

In the 1930s, evacuation plans were drawn up by the authorities, who did not want to be caught unprepared as in 1914. When, in 1940, the German army overran France, many residents of northern and eastern parts of the country again experienced an “exodus.” The memory of the harshness of life in occupied territories during World War I was stronger than the fear of exile. 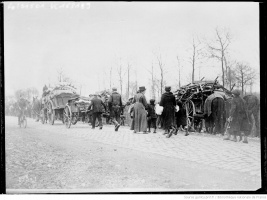 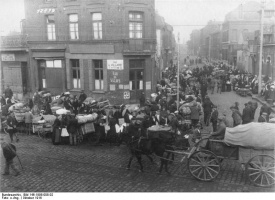 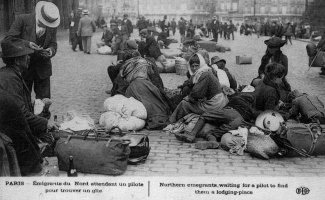 Emigrants from Northern France waiting for a guide 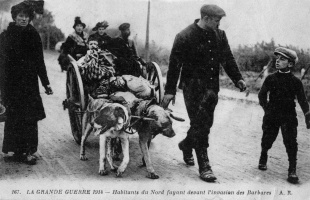