The Ottoman Empire fought the First World War for the sake of survival in the short term and independence and security in the long. Its diplomatic, territorial, economic, and domestic war aims were shaped to this end. Its military strategy acknowledged that it was an auxiliary, and that the war would be won or lost by its German and Austro-Hungarian allies. It envisaged an eventual peace which would enhance its standing within a European-dominated international system.

For the Ottoman Empire, the First World War represented an opportunity for survival. It had long been internationally weak and isolated, with its sovereignty constrained by treaties and capitulations which gave the European Great Powers substantial rights of interference in its internal affairs, and facilitated imperialist processes of “peaceful penetration”. Most recently, defeat in the Balkan Wars of 1912-1913 had demonstrated its vulnerability to aggression, shattered its military prestige, and conjured up the spectre of its final dissolution, prompting Britain, France and Germany to conclude agreements dividing Ottoman Asia into areas of economic interest, and Russia to impose a reform programme on six Anatolian provinces where the Armenian Christian minority was concentrated. These arrangements, it was feared, foreshadowed partition.[1] The Ottoman government’s decision to join the First World War was therefore rational: neutrality would have left it vulnerable, while belligerency gave it allies and influence abroad, and freed its hands at home. Of necessity, it joined the Central Powers: they had need of its alliance, the Entente did not.[2]

The Ottoman Empire pursued three broad war aims: to ensure its long-term security and survival; to establish itself as a fully independent and sovereign state; and, should opportunity arise, to extend its territory and influence into the neighbouring regions of the Balkans, the Caucasus, Iran, and North Africa. Survival and security was to be achieved through alliance with Germany and Austria-Hungary, which only the war rendered possible, but which the Ottoman leadership was determined should outlast the war: as agreed in 1915, until 1926.[3] Sovereign independence was asserted by the unilateral abrogation of the capitulations, the denunciation of the treaties which enshrined the European powers’ rights of interference in internal Ottoman affairs, and economic measures designed to foster a Muslim “national bourgeoisie” at the expense of foreigners and non-Muslim Ottoman subjects. Implicitly, all these steps were directed as much against the Empire’s German and Austro-Hungarian allies as against its Entente enemies. The Ottoman leadership recognised that it would stand in need of German support and protection in the longer term, but it was wary of German Weltpolitik and had no interest in a Mitteleuropa.[4] Its goal was acceptance as an independent partner; whether this was realistic, and how matters might have developed had the Central Powers won the war, remains an open question.

The war offered other opportunities for the state’s consolidation: most controversially, through the 1915 deportation of the bulk of Anatolia’s Armenian population, an episode marked by mass violence which has provoked charges of genocide, and through lesser measures against Anatolia’s Greek population. The other side of this coin was a programme of nation-building, designed to “Turkify” Anatolia through the resettlement there of Muslim migrants and refugees from the Empire’s lost Balkan territories. None of this could have been achieved under pre-war conditions.[5]

The Ottoman government’s hopes of expanding its territory and regional influence have been attributed to the ideologies of Pan-Islamism and Pan-Turanianism, but a closer examination suggests that the real motive was concern for the Empire’s long-term geopolitical security. In the Balkans, this was expressed in the watchword “balance”, meaning the containment of the Empire’s neighbour Bulgaria, which became the Ottoman Empire’s nominal ally when it joined the Central Powers in September 1915. This concern manifested itself first in a demand, ultimately unsuccessful, that Bulgaria should cede Western Thrace to the Ottoman Empire as compensation for the extensive territorial gains it sought in Serbia; second, in the desire to maintain Romania as a regional power and counter-weight to Bulgaria, even after Romania had joined the Entente in August 1916 and been swiftly and decisively defeated; and third, in the wish to maintain an Albanian state, under a Muslim prince, but under Austria-Hungary’s protection.[6]

In the Caucasus, similarly, expansion of territory and influence was seen as a means of enhancing Ottoman security against Russia. Early plans in this direction came to nothing, as in 1915 Ottoman forces in the Caucasus were driven onto the defensive, and in 1916 pushed back into central Anatolia. Only with the Russian revolutions of 1917, and the Bolshevik regime’s decision to seek a separate peace, did the issue return to the agenda. With the Treaty of Brest-Litovsk, the Ottoman Empire recovered not only all territory lost to Russia since 1914, but also three Transcaucasian provinces which had been lost in 1878. By then, however, it was becoming clear that Russia had lost effective control of the Caucasus region to a quasi-independent Transcaucasian republic, which in turn would shortly dissolve into separate Georgian, Armenian, and Azeri states.

These developments presented the Ottoman Empire with an opportunity and a threat. The opportunity was to push Russia as far away from Ottoman borders as possible, and hold it at bay through a chain of intermediary or buffer states; unsurprisingly, the Ottoman government fully supported the creation of an independent Ukraine. The threat was that Russian power in the region would eventually revive, and that instability in the Caucasus might facilitate the emergence of a strong and hostile Armenian state on the Empire’s eastern flank. Hence the decision to press on beyond the Brest-Litovsk line, despite the violent objections of Germany, which had its own ambitions in the region, and was anxious not to jeopardise its relations with Russia. By September 1918 Ottoman forces had reached the Caspian at Baku. The aim, it seems, was not general annexation, but the establishment of Ottoman political hegemony in the region, embracing not only the Muslim populations of Azerbaijan and the northern Caucasus, but Georgia and Armenia as well. Attempts were even made to establish contacts over the Caspian in Russian Turkistan, but these were never more than exploratory.[7]

To the east, the Ottoman government aimed to extend its political influence into Iran and Afghanistan. Even before the war, Iran had posed a threat to Ottoman security, with a weak central government, Russian forces occupying much of the north of the country, and British influence strong in the south. The hope was to draw the Iranian government into alliance, or to stimulate a popular uprising which would produce the same result. In the longer term, Iran and Afghanistan, freed from Russian and British influence, might be bound to the Ottoman Empire in a permanent alliance, while the Ottoman government would assume responsibility for the reform of Iran’s administration and army. Faced with Russian and British forces on its soil, the Iranian government remained neutral, no popular uprising supervened, and while in 1916 Ottoman forces penetrated eastwards from Baghdad as far as Hamadan, they effected no fundamental change in Iran’s situation, and were abruptly withdrawn after Baghdad fell to the British in March 1917. A year later, Bolshevik Russia acknowledged Iran’s independence, and Russian forces withdrew from the country, but this gain was offset by growing British penetration from the south.[8]

Ottoman ambitions in North Africa were focused on the recovery of the provinces of Egypt, occupied by the British since 1882, and Tripolitania, occupied by the Italians since 1912. Both provinces were beyond the effective reach of Ottoman forces. Early hopes that the appearance of a small Ottoman expeditionary force on the Suez Canal might set off a popular uprising in Egypt were swiftly disappointed. While officers were sent to assist local insurgents against the Italians in Tripolitania, their activities there achieved no more than a minor diversion. There remained only the remote hope that the two provinces might be regained at a future peace conference.[9]

Ottoman military strategy accepted that the war would be won or lost in Europe, and that the primary task of the Ottoman armed forces was to assist their German and Austro-Hungarian allies to achieve a decisive victory in that theatre. Only in 1918, when Ottoman forces advanced into the Caucasus in defiance of German wishes, was this basic strategic assumption modified. Ottoman forces could assist their allies in three ways: they might intervene directly in Europe; they might draw British, French, and Russian forces towards themselves, thus diverting them from the European theatre; and they might seek to stimulate Muslim uprisings against the Entente Powers in the Caucasus, Iran, India, and North Africa, again with a view to diverting enemy forces from Europe. All three strategies were attempted.

Until late 1915, when Bulgaria joined the Central Powers, direct Ottoman intervention in Europe remained impractical. In 1916 a total of seven Ottoman divisions were despatched to the Galician, Macedonian, and Romanian fronts, reinforcing their allies where they were weakest. The diversionary strategy proved more effective, pinning down enemy forces in Egypt and the Caucasus, and above all, drawing off large British forces in the Dardanelles campaign and the subsequent campaigns in Mesopotamia and Syria. The revolutionary strategy, inaugurated by an appeal to Muslims world-wide to assist the Ottoman Caliph in a Holy War against the Entente, proved least successful: small-scale subversive and irregular operations were launched in a swathe of territories stretching from French North Africa through Tripolitania, the Caucasus, and Iran to the frontiers of British India, but they failed to call forth any significant uprisings, or to divert or pin down any substantial enemy forces. Arguably, the Ottoman Empire’s principal strategic achievement derived from its closure of the Straits, impeding the flow of supplies and other support to Russia from its Entente allies, making a significant if unquantifiable contribution to Russia’s eventual exit from the war.[10]

Conclusion: The Question of Peace↑

From start to finish, the Ottoman government’s working assumption was that even in the event of victory, peace would be negotiated, not dictated, and that Britain, Russia, and France would survive as Great Powers. Hence its concern to ensure that its alliance with Germany and Austria-Hungary should outlast the war. Hence, too, its concern to induce Germany and Austria-Hungary to endorse its abrogation of the capitulations and other restrictive treaties in advance of any peace conference, and to obtain assurances that its allies would entertain no peace proposals which might compromise the Ottoman Empire’s sovereign independence and territorial integrity. This was a concern much reinforced by the substantial losses of territory Ottoman forces suffered in Anatolia and the Fertile Crescent during the campaigns of 1916 and 1917.[11] For their part, Germany and Austria-Hungary were periodically disturbed by rumours that the Ottoman government might seek a separate peace with the Entente; these fears were exaggerated. Admittedly, in 1917 and 1918 the British did put out feelers to the Ottoman Empire, just as they put out feelers to Austria-Hungary and Bulgaria. It seems doubtful that the Ottoman leadership took these contacts seriously, not least because the terms the British were prepared to offer, demanding the effective surrender of Arabia, the Fertile Crescent and “Armenia”, were such that only a defeated power could have contemplated. The contacts never reached the stage of negotiation and eventually petered out.[12] The Ottoman government held to its view that the war would be won or lost in Europe and stood by its allies until Bulgaria’s defection forced it to conclude an armistice, shortly before Austria-Hungary dissolved and Germany itself sought an end to hostilities. 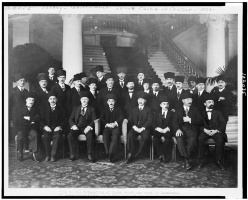 Turkish delegates to the Conference of Lausanne, 1923 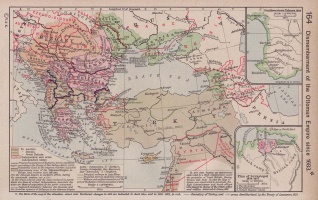