Between 1914 and 1918, both the Ottoman Empire and Germany engaged in a propaganda campaign to foster jihad amongst the world’s Muslims. While the Ottomans – concentrating more on Muslims on the home front than beyond Ottoman boundaries – fared rather well, German efforts to raise Muslims to anti-colonial revolts failed rather miserably.

European Fears of Islam and Jihad↑

By 1914, all colonial powers had realised that Islam – in its many local forms – manifested a powerful tool for anti-colonial resistance. This led to two conclusions. on the one hand, the colonial “powers that be”, namely, Britain, France and Russia, had to realise that the presence of many Muslim subjects in their colonies represented a strong – and credible – threat to their colonial possessions. On the other hand, the colonial powers “that would like to be” – i.e. Italy and Germany – began to think of harnessing the global Muslim population to their own colonial undertakings.

Max Freiherr von Oppenheim (1860–1946), a German dilettante Orientalist, was convinced that the “Muslim weapon” might be used to good effect in the case of a world war. Oppenheim had lived in Egypt between 1896 and 1910. He frequently visited Sufi events and became convinced that all Muslims were fanatically worshipping “Allah, their god.”[1] Consequently, he pushed the German foreign office to promote a jihad against the enemies of Germany and the Central Powers. Yet he was not the only German “jihadist.” Friedrich Naumann (1860–1919), the established national-liberal intellectual, supported the idea of a Muslim jihad, as did Friedrich Bronsart von Schellendorff (1864–1950), who from 1913 onwards served as chief-of-staff of the Ottoman forces in the context of the German military mission.

Nonetheless, it would be wrong to deny Ottoman “agency” in the jihad that was proclaimed in 1914. The Ottomans were more realistic than the Germans in their ambitions. They aimed more at uniting Ottoman Muslims in a fight against the Entente Powers than at stirring up Muslim uprisings. That is not to say that they did not engage in operations beyond Ottoman borders to foster jihad, but they were not overly optimistic about the results.

Jihad was indeed declared by the Fetva Emini (the official in charge of proclaiming Koran exegeses on behalf of the Shaykh-ul Islam) on 14 November 1914, in the form of a fatwa (a judicial opinion or ruling). The proclamation was somewhat unusual insofar as it declared aholy war against “all enemies of the Ottoman Empire, except the Central Powers,” an issue that was immediately taken on by the Dutch Orientalist Christiaan Snouck-Hurgronje (1857–1936), who declared it a “jihad made in Germany.”[2] The proclamation exhorted Ottoman Muslims – in fact, Muslims the world over – to fight on behalf of the Sultan-Caliph and Islam against the “enemies of Islam.” The fatwa likewise forbid Muslims to take up arms against the allies of the Ottoman Empire – namely Germany, Austria-Hungary and Italy. The latter was a particularly complicated issue: Italy had invaded formerly Ottoman Libya in 1911 and was still involved in a fierce struggle in the country.

What seriously endangered the success of the jihad proclamation was the – at first – abysmal performance of Ottoman forces on the battlefield. In winter 1914, Ismail Enver Pasha (1881–1922) took more than 100,000 Ottoman troops to the east against Russian forces. The troops, ill-equipped and lacking winter gear, largely succumbed to atrocious conditions.

In the following years the Germans invested considerable sums of money and effort in fostering a jihad. In September 1914, the “Nachrichtenstelle für den Orient” (“Intelligence Office for the East”) was set up in Berlin. It aimed at producing propaganda material both for Muslims the world over, and for Muslim prisoners of war interned in the camps of Zossen and Wünsdorf near Berlin. The intention was to turn these Muslims into fighters on the German/Ottoman side – eventually with rather limited success.

In 1915 the German “Intelligence Office of the Imperial German Embassy” was established in Istanbul: its main occupation was the creation of up to fifty so-called “News Rooms” all over the Ottoman Empire. Here propaganda leaflets, placards, photographs and other pictorial material were made available to the Ottoman population in order to stir up enthusiasm for the war effort.

Where the Germans erred was in their belief that Mehmet V, Sultan of the Turks (1844–1918) exerted authority over all Muslims. He was the Sunni caliph, and his word was not binding for Shi'i Muslims. Secondly, the constitutional changes of the Committee of Union and Progress had greatly diminished the role of the Ottoman sultan: by putting him under constitutional control, they had turned him into a constitutional monarch – nothing unheard of in Islamic history. Yet he also had become a “constitutional caliph”, which was an impossibility according to Islamic law.

Thus there were, in fact, two “Ottoman jihads.” On the one hand, a German one: this might be termed the offensive jihad. Its aim was to incite Muslims in the Entente colonies to large-spread rebellions. It would force the Entente Powers to post large bodies of troops in their colonies, which would consequently be lacking on the Western Front. In the case of ultimate success, the Entente Powers would lose control of their colonies, which might then be occupied by Germany. The obvious flaw in their logic – why should anti-colonial movements prefer German colonialism to British/French/Russian colonialism – apparently was of no concern to anyone in Germany fostering this strategy.

The Ottoman jihad, in contrast, was more moderate in scale and ultimately more successful. While there were also Ottoman attempts to incite Muslims in the Entente colonies to rebellion, the main aim was to forge Ottoman Muslims together to resist the potential invaders. In this sense, Ottoman jihad propaganda was successful: even during the “Arab Revolt”, which broke out in June 1916, the majority of the Ottoman Empire’s Arab population remained loyal (or at least indifferent) to the Ottomans. For Britain, the revolt thus turned out to be a rather costly failure.

The offensive jihad, on the other hand, ended in a rather miserable failure. Most Muslims beyond the borders of the Ottoman Empire stayed calm and did not rise against their non-Muslim colonial overlords. To boot, Eşref Sencer Kuşcubaşı (1873–1964), a field director of the Ottoman Teșkilat-i Mahsusa (Special Organization), stated that “Muslims in the enemy ranks fought with gusto against us.”[3]

The Ottoman jihad thus turned out to be a domestic rather than a global affair: the cohesion of the Ottoman Empire was secured during the war years, and Ottoman Muslims rallied to the flag of the sultan-caliph to defend the homeland. Muslims in other areas of the world stayed aloof, and with very little exceptions did not decide to fight on the side of the Central Powers. 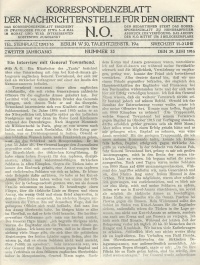 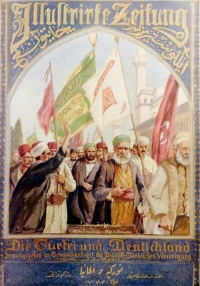