World War I introduced new technologies and doctrine in a quest to overcome the tactical stalemate of the trenches. The first tanks had great potential that would be capitalized upon during the next world war, but early models suffered from design flaws and lack of doctrine for their use on the battlefield.

Tanks are armored vehicles designed to combine the military factors of fire, maneuver and protection. Although the concept of armored vehicles preceded the Great War, the tank was specifically developed to overcome the stalemate of trench warfare on the Western Front that followed the First Battle of Ypres (19 October-22 November 1914). The marrying of recent technological advances, such as the internal combustion engine with armor plating, enabled the tank’s development during World War I.

The first tanks introduced in 1916 were generally slow and hard to maneuver, and they performed poorly in rugged terrain. The early models were heavily influenced by commercial tractors. While impervious to barbed wire, small arms, and shrapnel, their primitive armor was still susceptible to heavy machine gun fire and direct hits from high explosive artillery rounds. Most tanks typically had two versions: “male” tanks designed with artillery to attack fortified positions and “female” models armed with machine guns to target enemy infantry.

The British developed the initial tank prototypes in near total secrecy after a proposal by Lieutenant Colonel Ernest Swinton (1868-1951), with the enthusiastic support of Winston Churchill (1874-1965), First Lord of the Admiralty. In February 1915, the government formed the Landships Committee, which consisted of military engineers and officers from the army and the Royal Navy Air Service, to review plans for new armored vehicles. The very first tank to be built in the world was the No. 1 Lincoln Machine which was designed by Sir William Tritton (1875-1946) and Lieutenant Walter Gordon Wilson (1874-1957). It was known as “Little Willie” and was designed and constructed between August and September of 1915. During the construction of “Little Willie”, Tritton and Wilson began work on another design capable of meeting new War Office requirements. The new machine, which was completed in January 1916, was the Mark I and it would be commonly referred to as “Big Willie” or “Mother”.

Great Britain first introduced tanks to the battlefield at the Somme on 15 September 1916. Out of forty-nine total British Mark I tanks deployed to France, only thirty-one crossed the German lines, due to mechanical issues. Early tank warfare also suffered from inexperienced crews and a lack of doctrine regarding their integration with infantry. Nevertheless, the success of the tank in achieving total surprise and its potential to overcome trench warfare prompted the British High Command to order 1,000 more following the battle.

At the Battle of Cambrai, the British used over 400 Mark IV tanks during their assault on the Hindenburg Line. The Mark IV was the most common tank used by the British army during the war. It carried a crew of eight, weighed twenty-eight tons, and had a six-cylinder engine that allowed it to achieve a top speed of six kilometers per hour. The tanks were a critical component of a combined arms assault involving infantry and artillery, which successfully drove a salient eight kilometers deep into enemy territory while suffering a fraction of the typical casualties. The ultimate failure of the offensive was a result of poor planning regarding the allocation of reserve forces to follow up the initial assault.

Only Great Britain and France possessed a significant number of tanks by the end of the war, with the latter possessing the most. Both countries had experimented with their initial tank designs simultaneously. On 16 April 1917, the French debuted their first tank, the Char d'Assaut Schneider CA1 Heavy Tank, at Berry-au-Bac. Out of 132 tanks deployed, the French lost seventy-six tanks without much gain due to poor planning and difficult terrain. The Schneider was armed with a 75mm gun and two Hotchkiss machine guns. But, it suffered from a major design flaw: its fuel tanks were located in the front. The most successful French tank was the light Renault FT-17 tank, which was the first tank to have a rotating turret. The growing importance of tanks is epitomized by General Philippe Pétain’s (1856-1951) declaration during the latter part of the war: “We must wait for the Americans and the tanks”.

Although Germany formed a tank department as early as September 1916, the only operational German tank used in the war was the A7V Sturmpanzerwagen tank, which did not debut on the battlefield until early 1918. The A7V had a top speed of eight kilometers per hour and a range of only twenty-four kilometers due to its large size. In addition to being unstable and susceptible to overheating, it required a crew of eighteen to operate. Furthermore, Germany only completed production of twenty A7V tanks during the war, compared to over 6,000 Allied tanks of various models. Germany failed to produce large numbers of the A7V because they could not justify the investment of scarce manpower and materiel based on the tank’s poor performance. Instead, Germany relied on captured British tanks to augment its armored forces. The first tank battle in history took place between three British Mark IVs and two German A7Vs on 24 April 1918 at Villers-Bretonneux, France.

Tanks in the American Expeditionary Forces↑

In June 1917, shortly after arriving in Europe, General John J. Pershing (1860-1948), commander in chief of the American Expeditionary Forces (AEF), directed his staff to review the employment of tanks on the battlefield. In December 1917, Pershing named Colonel Samuel Rockenbach (1869-1952) head of the new United States Tank Corps. French army tanks supported American offensives at Cantigny in May 1918 and Soissons in July 1918. The first battle in which the AEF used tanks operated by Americans was the assault on the St. Mihiel salient on 12-16 September 1918. American tanks also took an active role in the Meuse-Argonne Offensive from 26 September to 11 November 1918. However, none of the three tanks designed in America saw service during the war. Instead, the AEF used the French Renault or the British Mark V tanks.

Impact of Tanks on World War I↑

Although the Allies maintained a significant numerical advantage in tanks over Germany, the new weapon was not the decisive factor in the outcome of the war. It is true that tanks achieved small tactical gains in some instances, but limited capabilities and a lack of doctrine prevented the tank from becoming the key to Allied victory on the World War I battlefield. 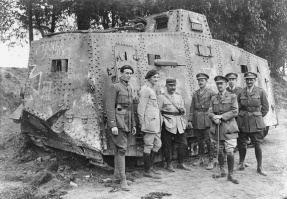 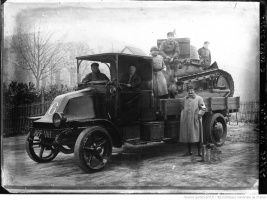 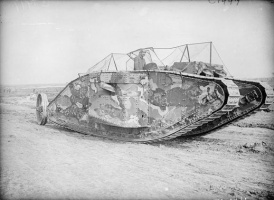 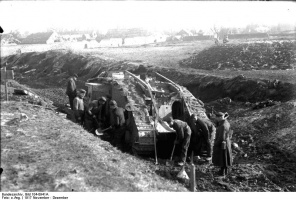 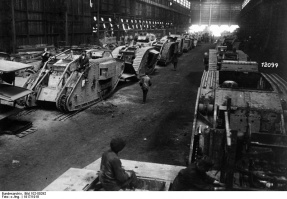