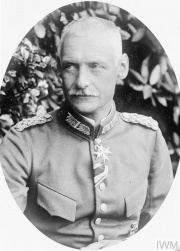 Crown Prince Rupprecht was the heir to the Bavarian throne and one of Germany's most senior generals on the Western Front during the First World War.

Rupprecht, Crown Prince of Bavaria (1869-1955) is of particular importance to the political and military history of Germany and the Western Front during the First World War. As heir to the Bavarian throne, he enjoyed privileged access to decision-makers at the highest levels of German government and society and participated in, or at least observed, most of the major political and strategic debates of 1914-1918. Further, as the commander of first an army, and then of an army group, on the Western Front from the war's outbreak to the armistice, he commanded up to 1.5 million men in iconic battles such as the Somme, Third Ypres and the last-gasp German offensives of 1918.

Rupprecht was born in Munich and interspersed spells of education at Munich and Berlin universities with military duties as a junior officer in the Bavarian army, including two years of study at the elite Munich War Academy. Rupprecht rose rapidly through the ranks to Major-General by the age of thirty-one. In 1900, after a playboy youth, he married his cousin Duchess Marie-Gabrielle in Bavaria (1878-1912), apparently out of love. Their happiness, however, was marred by miscarriage, infant deaths, and his wife's illness. She died at the age of thirty-four, leaving him with two sons, one of whom then died of polio in August 1914.

At the outbreak of the war, Rupprecht was sent to war in Lorraine commanding the German Sixth Army of about 250,000 men, most of whom were Bavarians. His mission was to tie down French troops to make it easier for the German right wing, following the Schlieffen-Moltke plan, to swing across the plains of Belgium and northern France and win the decisive victory that would knock France out of the war.

In one of the most controversial campaigns of the First World War, Rupprecht failed to trap the French in Alsace-Lorraine. As the fighting there slid into stalemate, Marshal Joseph Joffre (1852-1931) managed to shift sufficient forces north to baulk the Germans at the First Battle of the Marne. Rupprecht and the Sixth Army were transferred to the right wing but his attempts to outflank the Entente forces first along the Somme, then at Arras, and finally at Ypres were all stymied.

From November 1914, Rupprecht and the Sixth Army spent the next eighteen months in Artois, successfully fighting off major French attempts to break through at Notre Dame de Lorette and Vimy Ridge. In August 1916, he was promoted to Field Marshal and appointed to command a group of four armies operating from the Belgian border to Reims. This gave him responsibility for overseeing the defence in the battles of the Somme, Arras, Third Ypres and Cambrai. He launched the German offensives of March 1918 and bore the brunt of the Allied counter-offensives that led to the armistice.

Rupprecht's generalship attracted criticism after the war, including from Erich Ludendorff (1865-1937), who unfairly described him as a weak commander who was carried by a professional chief of staff. Rupprecht was lucky in his chiefs of staff: two of them, Konrad Krafft von Dellmensingen (1862-1953) and Hermann von Kuhl (1856-1958) were two of the most talented and distinguished soldiers in the German army. He also took his own military duties very seriously, however, and was more than capable of having his own ideas and opinions about the best course of action. Once he had found his feet, he managed to form productive working partnerships with both men, at least until Ludendorff tried to bypass Rupprecht and micro-manage every last detail himself in 1918. Rupprecht ran efficient and effective formations that achieved their objectives in individual battles, or prevented the enemy from gaining his, more often than not. That the German army ultimately failed on the Western Front, where the whole campaign mattered more than the sum of the individual battles, could hardly be blamed on him.

This was not least because Rupprecht worked at the operational level of war, within a strategic framework set by others. He was not responsible for framing that strategy himself. Nor was he very successful at influencing it. His handicaps included: Rupprecht's poor relationship with his father, Ludwig III, King of Bavaria (1845-1921); Prussian condescension towards Bavaria; and his own sometimes prickly manner. Three big questions confronted Germany between 1914 and 1918: whether to go to war; how violently to fight; and how to end it. He was not consulted about the first, but seems to have agreed with the decision to fight. He supported the second and backed, for instance, the deployment of poison gas. As for the third, although he did eventually realise that Germany could no longer win by force of arms and must seek peace, he did not do so until spring 1918. By then it was too late.

In November 1918, Ludwig III fled a socialist revolution in Munich. Forced to flee to neutral Holland on a false passport, Rupprecht was not able to finally settle at home until the end of 1919. Even then, for several years he remained threatened with indictment for war crimes, until the case was eventually dropped. Rupprecht was influential in conservative politics but Adolf Hitler (1889-1945) never forgave him for not publicly supporting the Beer Hall putsch (November 1923) and, under Nazi rule after 1933, Rupprecht was forced to adopt a low profile. This he maintained until he went into exile in Italy when the Second World War began. As the German situation deteriorated in the summer of 1944 and the regime lashed out at anyone it suspected, Rupprecht went into hiding in Florence shortly before the Gestapo's knock on the door, emerging only after liberation. Rupprecht's family (he had married again in 1921) were not so lucky, barely surviving incarceration in a series of concentration camps, including Dachau.

Rupprecht spent the winter of 1944-1945 writing long memos to Dwight D. Eisenhower (1890-1969) with ideas for the shape of the post-war German constitution, but the Americans had not fought a world war to restore royal families to their thrones and the last ten years of his life were increasingly quiet. He died at age 86, on 2 August 1955. Some 50,000 mourners filed past his coffin at Schloss Nymphenburg as he lay in state, dressed in the uniform of a Bavarian Field Marshal. 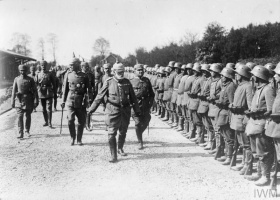 King Ludwig III of Bavaria and his son Crown Prince Rupprecht inspecting troops on the Western Front, May 1918