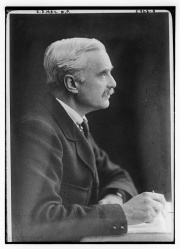 E. D. Morel was one of the earliest critics of the secret diplomacy and alliance system that led to the start of the Great War. Imprisoned during the war by the British government for his writings, he later became a foreign policy leader in the Labour Party and a critic of the Treaty of Versailles.

Edmund Dene (E.D.) Morel (1873-1924) was born in Paris in 1873 to a French father and English mother. Educated in England following his father’s death in 1877, Morel moved to Liverpool in 1890 with his mother to take a position as a clerk in the shipping company of Elder Dempster & Company. His job brought him into frequent contact with the authorities of the Congo Free State and alerted him to the atrocities being committed in the colony that was the personal property of Leopold II, King of the Belgians (1835-1909). The abuses in the Congo emerged from Leopold’s seizure of land he claimed was vacant and requirements that the Congolese deliver quotas of rubber and ivory to government officials or concessionary companies largely controlled by Leopold’s friends. Failure to meet quotas resulted in violence and death meted out by the Force Publique, Leopold’s colonial army. The images of severed hands, handless Congolese children, and burned villages that emerged during Morel’s campaign were especially shocking to many Europeans. In 1901, Morel resigned from his position at Elder Dempster and began writing about Africa for a British newspaper. Two years later, he started the African Mail, a weekly journal that discussed West and Central Africa and largely championed the rights of Africans. That same year, the British House of Commons passed a resolution calling for humane governance for African workers in the Congo.

From 1903 to 1913, Morel wrote books, pamphlets, articles, and speeches attempting to expose the horrific situation in the Congo. His tales of forced labor, the recruitment of children into the military, the destruction of villages, and torture roused public opinion in opposition to Leopold’s regime in the Congo. In 1904, Morel and Roger Casement (1864-1916), a British consul official stationed in the Congo, established the Congo Reform Association (CRA) to draw attention to the exploitative conditions in the colony. Due, in part, to the efforts of the CRA, Leopold relinquished control over the Congo in 1908 and it became a Belgian colony. Morel, through the CRA, continued until 1913 to investigate the conditions in the Congo to ensure Belgium instituted reforms to improve the lives of the Africans.

During the course of Morel’s efforts to address the situation in the Congo, he became convinced that the Entente Cordiale, a 1904 statement of friendship and diplomatic understanding signed between France and the United Kingdom, limited the British government’s ability to apply pressure to Belgium and had the potential to drag the UK into international conflicts. The 1911 Agadir Crisis, during which Britain backed a French military intervention in Morocco over German claims, confirmed his suspicions. The next year, Morel published Morocco in Diplomacy, criticizing the secret commitments the British Foreign Office had entered into and calling for more parliamentary control over foreign affairs. His condemnation of these governmental policies paved the way for him to become the Liberal Party candidate for the Birkenhead House of Commons seat in 1912.

When the Great War began in August 1914, Morel was one of the few individuals in England to speak out against the conflict. His criticism of the British and French roles in starting the war and his lack of sympathy for invaded Belgium cost him his parliamentary candidacy. Alongside Labour Party leader James Ramsay MacDonald (1866-1937), liberal politicians Arthur Ponsonby (1871-1946) and Sir Charles Trevelyan (1870-1958), and journalist Ralph Norman Angell (1872-1967), Morel established and became executive secretary of the Union of Democratic Control (UDC). The UDC’s main objectives were to democratize foreign policy, establish a post-war organization that could negotiate solutions to international conflicts, and end the current war with peace terms that would not result in future hostilities. Morel took the lead in a vigorous effort to promote the UDC’s arguments by publishing numerous pamphlets, articles, and a 1915 revised edition of his book on Moroccan diplomacy - Ten Years of Secret Diplomacy.

Morel’s anti-war activism resulted in negative portrayals of him in the press and on 31 August 1917, he was arrested and later imprisoned for sending anti-war literature to a neutral country. The six months of hard labor he served in Pentonville Prison had a long-term negative impact on his health. Upon his release in January 1918, Morel discovered that public opinion about the causes of the war and its aims was shifting. Russia’s release of documents detailing the secret pre-war agreements among the Entente powers confirmed many of Morel’s accusations. In addition, Woodrow Wilson’s (1856-1924) post-war peace plan, the Fourteen Points, mirrored many of the goals long advocated by Morel and the UDC. Over the course of 1918, rather than reviling him as a traitor, the socialist Independent Labour Party came to embrace Morel as a hero.

Morel was an early and vocal critic of the Treaty of Versailles. His primary objection to the treaty was the war guilt clause that required Germany to assume blame for the entire conflict and masked the Entente’s responsibility for the war. He also attacked the territorial losses foisted upon Germany by the victorious powers, as well as reparations and the mandate system. Although the UDC had proposed the creation of an organization similar to the League of Nations, Morel even criticized this part of the treaty since it excluded Germany and Russia from membership. Writing columns in the UDC journal, Foreign Affairs, Morel agitated for a revision of the treaty.

Morel’s disdain for the Treaty of Versailles and France’s use of colonial troops during its occupation of the Rhineland likely explains his publication of The Horror on the Rhine in June 1920. This pamphlet echoed German complaints about the occupation of the Rhineland by France’s African troops as allowed by the treaty. Both Germany’s and Morel’s criticisms of “The Black Shame” (Schwarze Schmach) played upon racist fears of African savagery and hyper-sexuality toward white women. Unlike his efforts to expose the conditions in the Congo, Morel did not attempt to verify the stories he published of assaults by black troops against German women and girls. Likewise, his portrayal of Africans in a manner that promoted racial stereotypes was uncharacteristic of his previous writings on the Congo. Nevertheless, his campaign against the use of black forces in Germany reflected not only Morel’s anti-imperialism and determination to undermine the Treaty of Versailles, but also the limits to his views on racial equality.

In 1922, Morel was elected to one of the Dundee House of Commons seats on the labour ticket. Over the next two years, he informally served as the foreign policy spokesman for the party. When the Labour Party gained control of the government in January 1924, many expected the new prime minister, Ramsay MacDonald, to make Morel foreign secretary. MacDonald kept the position for himself and instead nominated Morel for the Nobel Peace Prize. The relationship between Morel and MacDonald deteriorated rapidly over the next several months as Morel criticized the government’s failure to revise the Treaty of Versailles and reduce the overall amount of German reparations. In the October 1924 elections, the Labour Party lost control of the government, while Morel was reelected by his largest margin of victory ever. The campaign, however, exhausted him, and on 12 November 1924, Morel suffered a fatal heart attack while walking in the woods. 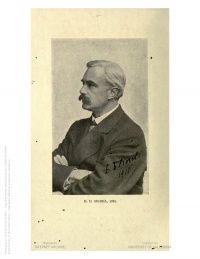