The article discusses the Force Publique, the colonial troops of the Belgian Congo, in the East African campaign of the First World War. The Force Publique played a major but until now insufficiently studied role in the Allied efforts against the Germans in this theatre of the war.

In 1914, the Force Publique (FP), the Belgian colonial army in the Congo, was the most experienced fighting force Belgium had. Numbering around 17,000 at this time, it had fought numerous campaigns of colonial conquest, subduing anti-colonial rebellions and mutinies of its soldiers. It did so even during the first weeks of the First World War. Its organization and tactics were roughly comparable to other colonial troops. The backbone of the FP’s military organization was the company, with a strength of 250 to 950 men commanded by a dozen European officers. They were usually stationed at district centers, and they fulfilled a wide array of tasks in securing and maintaining colonial politics. For instance, they undertook tax collection and enforced Africans to provide their labor for the colonial economy.

In contrast to other colonial troops, FP officers did not come exclusively from Belgium. For instance, a great number of Scandinavians served in the FP. The first African soldiers had been recruited from the slave trading armies of the Zanzibari traders, setting a pattern that shaped the ethnic composition of the FP for years to come. The men came mostly from both sides of Lake Tanganyika, with an increasing portion coming from the Manyema region, a center of the eastern African slave trade in late 19th century. Not unlike other colonial troops, the FP was a melting pot of very different cultures of violence that was not only shaped by Europeans, but also by local Africans and even by Zanzibari and Swahili from the East African coast. Moreover, a distinct military culture and specific forms of violence used by the FP had developed out of the everyday needs of colonial conquest and colonial rule, and by negotiations between the African rank-and-file and their European officers. This was a process that involved several mutinies and even the participation of soldiers in several rebellions on the side of local chiefs. In the years of the colonial conquest and the Congo Free State (ca. 1883-1905), violence intermingled with economics and politics: the FP committed numerous atrocities against the civilian population. Plundering and pillaging, raping and abducting women, and murdering and mutilating Africans became a common part of its culture of violence that was not only tolerated by the European officers, but also regarded as a necessity for subduing African resistance.

The morphing of the Congo Free State into a Belgian colony in 1908 had little effect on the Force Publique. The First World War, however, saw a major reorganization of the FP. More than 5,000 new recruits filled its ranks, which now became organized in mobile brigades of several thousand men. Many of the new recruits were forced to serve by colonial chiefs and administrators, but many also volunteered. The commander-in-chief was Charles Tombeur (1867-1947), a veteran of the days of colonial conquest. Additionally, several hundred Belgian officers arrived with new weapons, mostly light artillery and maxim guns, during 1915.

In the first weeks of the war, Belgium had been reluctant to participate in military operations against the Germans in Africa. In 1908, the Belgian government had rather unenthusiastically assumed the responsibilities for Leopold II, King of the Belgians' (1835-1909) failed private colony and since then done little to strengthen the colonial state. Security in the colony was still unstable; colonial administration and infrastructure were only in their infancy. Given the contentious past of the FP, the Belgians doubted its readiness for a war against another European colonial power. Only after mounting pressure from the British and French, and from the developing course of events in Africa, did the Belgian government agree to the participation of 600 soldiers in the Cameroon campaign.

Following the Allied defeat of German forces in Cameroon in 1916, the main theatre of war for the FP became Eastern Africa. Already in August of 1914, the first skirmishes between German and Belgian troops occurred at Lake Tanganyika and around Lake Kivu. The FP suffered several defeats, such as the loss of the Island of Ijiwi in Lake Kivu. It was, however, successful in repelling a major German attack against the Rhodesian city of Abercorn in spring 1915.

Around the same time, Belgian and British officers coordinated a major allied offensive against German East Africa for 1916. Belgian preparation took over a year and pushed the Belgian colonial state to its limits. Thousands of soldiers and their equipment had to be transported over more than a thousand kilometers. More than 250,000 Africans were recruited as porters. Most men were forced into service and many deserted before they reached the frontlines. Many died in the first months of the war because of unhealthy conditions and lack of food.

The offensive commenced in May 1916. Three brigades began their assault from Lake Tanganyika and south and north of Lake Kivu. The Germans offered little resistance and the Belgian advance was more hampered by problems with supplies. Within a few months, the FP conquered most of the western parts of the German colony. In September 1916, they reached the gates of Tabora, the provisional German capital of the colony. After weeks of fierce battles, the Belgians achieved their first (and only) major victory against Germans in the First World War and occupied the city. With the occupation of Tabora and the surrounding region of Unyamwezi and Tombeur, the Belgian government in exile saw their main goals achieved. The FP successively withdrew their commitment to the fight against Germany.

At the beginning of 1917, first units of the FP disengaged from German East Africa. This demobilization was reversed when a German column of several hundred troops under the command of Max Wintgens broke through allied lines and marched toward Tabora. This second campaign, as these events were called in Belgian documents, saw the return of at least 8,000 troops to the battlefield. The hunt for the Germans took more than eight months, and ended only on the foot of Mount Kilimanjaro, where the remnants of the German column surrendered to the British. The FP had to be withdrawn in the later phase of the operation, because its soldiers and officers increasingly refused to sacrifice their lives. One of the bloodiest defeats that the FP suffered in whole war was the battle for Ikoma (half way between Lake Victoria and the Kilimanjaro) in July 1917 which resulted in the loss of 84 soldiers and one officer; 43 soldiers were wounded.

British officials accused the FP of numerous atrocities against the civilian population. The Belgian soldiers had plundered and pillaged their way through the central and northern parts of the German colony which was now occupied and administered by the British. Abduction and mass rapes of women were common occurrences. This led not only to conflicts between Belgian and British officers (some were even threatened at gun-point by soldiers of the FP when they tried to prevent the plundering and murder of Africans) but also between Belgian colonial officers and those from the motherland. Confronted with these accusations, the new commander-in-chief Armand Christophe Huyghe (1871-1944) tried to implement stricter control over his troops. But his efforts were thwarted by soldiers and some officers’ resistance, as well as the realities of a highly mobile style of warfare in which soldiers exploited every population with which they came into contact. The British, however, used reports of war crimes to weaken the Belgian position in negotiations over the future of the German colony. 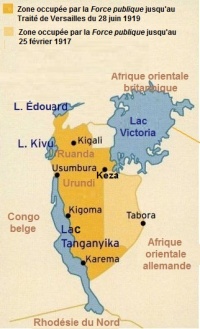 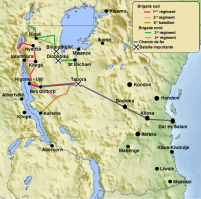