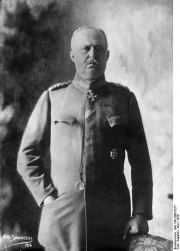 Erich Ludendorff was the effective commander of the German armed forces during the war. He also became a quasi-dictatorial figure, the ruthless symbol of the army’s political power. After the war he became the new republican government’s most bitter public antagonist, challenging its moral legitimacy and conspiring with the Nazis and others to overthrow it.

Erich Ludendorff’s (1865-1937) father was a middle-class estate owner and reserve officer, who chose a military career for his son. The young Ludendorff entered a cadet academy at the age of twelve. In the course of his education he found himself an outsider, a commoner amid the sons of the aristocracy. In compensation he developed the intellectual energy, fierce determination, and ambition for which he subsequently became renowned. He was a good student but had few friends. After earning a commission at the age of seventeen, he entered a series of regimental and staff postings that led in 1908 to his appointment as a lieutenant colonel in the operations section of the Great General Staff. In this capacity he devoted his energies toward the German plans for a European war. These were, in his eyes, unrealistic given the state of the German army’s manpower and equipment. His uncompromising advocacy of increases in both areas enjoyed the support of Helmuth von Moltke (1848-1916), the chief of the General Staff, but it drew the opposition of other military and civilian leaders. Ludendorff’s determination was rewarded in the monumental appropriations bills that the Reichstag passed in 1912 and 1913. By then, however, he had been removed under pressure from the Military Cabinet and War Ministry to a regimental command.

Ludendorff had become known as the enfant terrible of the German army, a soldier whose obsession with the imperatives of warfare knew no compromise. He believed that warfare governed human affairs. At both the tactical and strategic levels, the waging of war was, he was convinced, a matter of concentrating superior force in battles, which, if properly prepared and conducted, won wars.

Soon after his promotion to major general in April 1914, Ludendorff was given an opportunity to put his convictions, as well as operational plans that he had helped prepare, into practice. Thanks to continued ties to Moltke, he became quartermaster in the Second German Army. In this capacity he participated in the attack on the Belgian fortress system in Liège, leading the small force that captured the main citadel on August 7, 1914. Two weeks later, Moltke named him chief of staff to the new commander of the Eighth German Army, which faced the potentially catastrophic advance of Russian forces in the east. Moltke calculated that Ludendorff would provide the dynamic in the new command, which was to be nominally headed by Paul von Hindenburg (1847-1934), a retired general who, at the age of sixty-six, was known for his stolid composure and was expected to follow Ludendorff’s advice. In the event, by the time he joined this army two days later, Ludendorff had endorsed the plans of its staff for a daring German offensive in the east. The plan eventuated in the Battle of Tannenberg, for which Hindenburg and Ludendorff took full credit. Triumph cast the two soldiers as folk heroes, the objects of popular acclaim throughout the country. Adulation provided a plebiscitary basis for their collaboration and growing power.

It is tempting to portray Hindenburg as the front for Ludendorff’s ambitions, energy, and operational audacity; but this picture is overdrawn. For all his talents, Ludendorff was a difficult man—grating, overbearing, easily antagonized. Hindenburg was a temperamental contrast as well as a more effective political figure. He thus played an essential part in calming his younger colleague. He was Ludendorff’s political mediator at court, among the military leadership, the country’s allies, and German civilian leaders, for whom Ludendorff had instinctive contempt. Ludendorff’s power was inconceivable without Hindenburg’s.

In recognition of their military success, Hindenburg and Ludendorff were named to the command of the eastern theater in October 1914. Ludendorff thereupon became the loudest advocate of giving strategic preference to this theater. In 1915 he oversaw the most spectacular German military triumph of the war. German forces broke through Russian lines in May and continued their eastward advance until the fall, when all of Russian Poland, as well as Lithuania and Latvia, was in the hands of the Central Powers. In much of this territory, which became known simply as Oberost, the eastern command ruled directly and without civilian interference. The campaign not only extended German rule deep into the east; in Ludendorff’s eyes it also confirmed both the priority of the eastern campaign and his belief that a well-executed tactical offensive would produce a strategic decision.

The failure of German forces to advance in the west further ratified Ludendorff’s thinking, and it led in the summer of 1916 to Hindenburg’s and Ludendorff’s promotion to the supreme command of the German armies. Their power now encompassed not only multiple fighting fronts but also the overburdened German home front. Once in power in Berlin, Ludendorff endorsed the judgment that the war must be won in the west, so he resolved upon a climactic battle in this theater. He concluded that this scenario required the ruthless acceleration of military production at home, as well as combing the home front for manpower for the army. As the so-called Hindenburg Programme centralized the army’s bureaucratic control over the economy, the supreme command’s rule became quasi-dictatorial, eclipsing civilian agencies, parliamentary institutions, and even the imperial throne, whose occupant had cause to fear the two reigning soldiers. In a fitting consequence of his vision of war, Ludendorff had become the most powerful man in the country.

By the end of 1916 he had decided that the decisive battle in the west could come only in 1918. In preparation in 1917, he undertook a defensive campaign in this theater, shortening his lines (notably in the retreat to the Siegfried Line). He also pushed for unrestricted submarine warfare against Allied seaborne traffic, aware that it would bring the United States into the war against Germany. He was confident, though, that Germany would have won the great battle, hence the war, by the time American troops arrived in Europe. The collapse of the Russian armies in the east in 1917 strengthened this confidence.

The great German Spring Offensive began on March 21, 1918. It reflected Ludendorff’s belief that a breakthrough at a pivotal point in the Allied line would trigger the strategic collapse of enemy forces. The validity of this thinking was not demonstrated, however, for the German forces could not achieve breakthrough at any of the points that Ludendorff selected. The Allies’ counteroffensive began in July, signaling the beginning of the end. Ludendorff himself admitted as much at the end of September and was removed from his position four weeks later.

The war’s outcome signified a psychological catastrophe for Ludendorff. Temperamentally unable to admit his own failure, he set out on a quest to understand the causes of the German defeat. This effort occupied him for the rest of his life. Even before the end of the war, his attentions had turned toward civilians on the home front, whom he accused of subverting support for the army in the field. Along with Hindenburg, he then became the leading proponent of the “stab-in-the-back” legend. He directed his energies into a series of conspiracies to overthrow the new republican government, which he regarded as the creature of the same “November criminals” who had betrayed the army. His allies now included former officers and a number of civilian groups on the “völkisch” right, including the NSDAP. In November 1923 Ludendorff joined Adolf Hitler (1889-1945) in the “Beer Hall Putsch.” He soon fell out with Hitler and nearly all of his other allies, few of whom were willing to accept his claims to power in a successor government. He found refuge in a small group of unconditional admirers, as he drifted into increasingly murky fantasies about the “supernational powers,” the Jews, Catholics, and Freemasons, who had joined forces to keep Germany weak. Two years before his death in 1937, he published a treatise on Total War, in which he attributed the German defeat in the First World War to the country’s failure to entrust its fate to an omnipotent military leader.