Upon their defeat in the First World War, German citizens developed strong conspiracies that their war efforts had been ruined by internal forces. These theories came to be known as Dolchstoßlegenden, or stab-in-the-back theories, and they contributed to the growth of post-war political movements.

When the German Empire collapsed in autumn 1918, at once theories of conspiracy appeared to explain the sudden breakdown. One theory was that the German Army had not been beaten on the battlefield, but was stabbed in the back by the mutinies in the Navy and by the outbreak of the revolution in Berlin.

This legend was rooted in stereotypes developed during the war and used established psychological dispositions. During the strikes of the ammunition workers in Berlin in January 1918, for example, the propaganda proclaimed that the front was victorious but the home front was about to break down. When General Erich Friedrich Wilhelm Ludendorff (1865–1937) had to recognize that his war was lost in September 1918, he put the full blame for the defeat on the politicians in Berlin and asked them to sign the necessary armistice. Although Ludendorff’s outburst of fury were not public in the years following the war, millions of Germans were convinced of conspiracy theories.

At the moment of surrender, it was difficult for ordinary Germans to recognize that the strategic situation was hopeless. The experience of defeat was not present in German society because combat had not reached German territory yet and huge parts of Eastern Europe were still occupied. Most Germans were aware of the worsening military situation, but many people, especially in the bourgeois political camp, were convinced that after a couple of months the whole situation might change again. At the same time the breakdown of the home front became obvious, shaping the perception of many people because it was part of their everyday experience. In autumn 1918 the disintegration of German society had reached such a level that the authoritarian Wilhelmine state was next to collapse.

Immediately after the end of the war, a huge variety of "stab-in-the-back" legends (Dolchstoßlegenden) appeared, but there was still no consensus about who was to blame. Generals accused the parliament, politicians, and the government. The protestant clergy, which had been extremely nationalist during the war, lamented the general moral decline and accused socialism, communism, trade unions, and sometimes the Jews for their betrayal. For the conservative and nationalistic Deutsch-Nationale Volkspartei (the German National People's Party or DNVP) the legend fit perfectly well into the political strategy for mass mobilisation against the republic. In 1918 the leadership of the Pan-German League decided to spearhead radical anti-Semitism and to place the full blame for defeat on the Jews. All these different interpretations of the causes for defeat played to two deep-rooted traditions in German political culture: anti-socialism and anti-Semitism.

These legends became even more popular in autumn 1919, when Field Marshall Paul von Hindenburg (1847–1934) was interrogated by the investigating committee of the parliament. He accused the socialists of having sabotaged his war from the very beginning until defeat became inevitable. The leadership of the DNVP used the stab-in-the-back story many times during election campaigns. Particularly in 1924, the party was able to win growing support beyond the traditional nationalistic political camps. The attempt of democratic politicians to initiate a trial in Munich to find out what really had happened in 1918 failed.

Today most historians agree that these stab-in-the-back legends destabilised the Weimar democracy to a very high degree and contributed to the rise of National Socialism. The worst case of political communication was not the aggressive controversy, but the breakdown of debate, and after 1924 the two political camps were not able to communicate anymore. The right-wingers were convinced that the country really had been stabbed in the back and the democrats were left to discover that any attempt to clarify the events was hopeless. 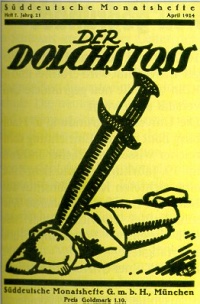