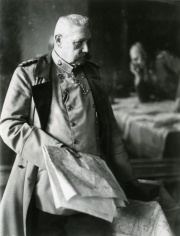 Paul von Hindenburg shot to fame after the Battle of Tannenberg in August 1914. He was Germany’s national hero of wartime, soon eclipsing the Kaiser. Appointed to the Supreme Command in 1916, he increasingly took on a political role. His myth survived the military collapse of 1918. Hindenburg served as president of the Weimar Republic from 1925 onwards and appointed Hitler as chancellor in 1933.

Hindenburg before the First World War↑

Paul von Hindenburg (1847-1934) was largely unknown before 1914. Born in 1847, he joined the Third Regiment of Foot Guards in 1866, admitting him to the Prussian Officer Corps. He fought in some of the key battles of German unification, which would later bolster his reputation as a symbol of national unity: Königgrätz in 1866 and Sedan in 1870. After concluding his training at the Prussian Military Academy, he was admitted to the Prussian General Staff, eventually becoming an infantry general in 1905. His name was mentioned in discussions about Alfred von Schlieffen’s (1833-1913) successor as chief of the General Staff in 1906. Although he lost out to Helmuth von Moltke the Younger (1848-1916), Hindenburg’s career had thus been a thriving one prior to his retirement in 1911.

Hindenburg during the First World War↑

The Battle of Tannenberg↑

In August 1914, Hindenburg was called back to command the Eighth Army in East Prussia. He was not chosen for his strategic brilliance, but as a calm and composed figurehead. His foremost task was to provide backing to the more junior Major-General Erich Ludendorff (1865-1937). Nevertheless, Hindenburg was credited with orchestrating victory in the Battle of Tannenberg in late August 1914, which helped to drive the Russians out of East Prussia. This invasion played a key role in emphasizing the idea that Germany was fighting a defensive war – an idea otherwise hard to maintain in light of Germany’s violation of Belgian territory. The decisive victory at Tannenberg contrasted sharply with the stalemate and trench warfare of the Western Front, and it secured Hindenburg’s reputation as Germany’s “saviour”.

The Emergence of the Hindenburg Myth↑

Within weeks of Tannenberg, the German population exalted Hindenburg to mythical heights. He became a symbol of victory and unity at home – a role traditionally reserved for the Kaiser. The new national hero was showered with official honours, and the country was flooded with Hindenburg souvenirs. Known for his sangfroid, Hindenburg seemed to personify Germany’s superior mental strength, a key theme of German war propaganda. His rectangular features and broad frame projected a specific type of masculinity and virile gravitas. He was often depicted as a rock in the ocean that kept back the tidal waves of the enemy’s onslaught. Hindenburg turned into Germany’s supreme symbolic figure and soon eclipsed Wilhelm II, German Emperor’s (1859-1941) public standing, raising concerns that his popular appeal had introduced a plebiscitary element into German politics that threatened the monarchy.

The field marshal was not shy about using his symbolic capital for political gain. From 1915 onwards, Hindenburg, supreme commander of German troops on the Eastern Front since November 1914, repeatedly threatened the Kaiser with his resignation in order to push through his political agenda, which included the dismissal of Erich von Falkenhayn (1861-1922), chief of the General Staff. For a long time, the scholarly consensus was that Hindenburg was an apolitical leader who was largely steered by others. More recent studies have revealed a man who was keenly aware of the power of his own image and who quickly developed an acute sense of the politically opportune.

The day after Romania entered the war on the Entente side on 28 August 1916, Hindenburg and Ludendorff were appointed to the Supreme Command. Hindenburg replaced Falkenhayn to become chief of the General Staff and Ludendorff was named his first quartermaster-general. The appointment caused a considerable upsurge in morale, but it did not stop the erosion of the monarchical idea. Wilhelm II was now eclipsed even more strongly in the eyes of the public. Celebrations of Hindenburg’s seventieth birthday in 1917 took on regal proportions, the massive arms and munitions programme introduced in the autumn of 1917 was labelled the “Hindenburg Programme”, and, in the public debate on war aims, a victorious peace with major territorial annexations favoured by conservative and Pan-German politicians became known as the “Hindenburg Peace”. In a symbolic sense, Hindenburg had turned into a “surrogate monarch”. He was not, however, a military dictator. Crucially, the Kaiser remained in charge of all personnel decisions. Hindenburg’s political clout nevertheless grew: he helped to bring about the proclamation of the Kingdom of Poland in November 1916 and was the key figure behind Chancellor Theobald von Bethmann Hollweg’s (1856-1921) resignation in July 1917. His backing also played a crucial role in the declaration of unrestricted submarine warfare in January 1917, which drew the United States into the war.

The End of the War and Revolution↑

Although Hindenburg had been the chief symbol of victory, his myth survived the military collapse. The Supreme Command announced Germany’s military bankruptcy in late September 1918, but Ludendorff was assigned the blame. While the Kaiser accepted his resignation on 26 October 1918, the new government under Max von Baden (1867-1929) carefully engineered Hindenburg’s retention for fear of public outrage over his dismissal. Hindenburg, who advised the Kaiser to go into exile during the November revolution, succeeded him as commander-in-chief and stayed on in that role until representatives of the democratic government signed the Treaty of Versailles in the summer of 1919. The transitional government, whose prime concern was re-establishing order and tranquillity after the upheaval of war and revolution, relied heavily on Hindenburg’s authority to ease the transition from monarchy to republic.

Hindenburg after the First World War↑

After his second retirement in late June 1919, Hindenburg did not vanish from the public eye. Despite the key role he had played during the transition, his testimony to the Parliamentary Investigation Committee on the Causes of the Collapse in November 1919 popularized the “stab-in-the-back” legend, which associated republican forces with defeat and treason. After Friedrich Ebert’s (1871-1925) death in 1925, Hindenburg, backed by a coalition of right-wing parties, became the Weimar Republic’s first directly elected president. In 1932, he was re-elected by a different political coalition of pro-republican forces, including the Social Democrats, who saw him as a guarantor of political stability. On 30 January 1933, Hindenburg appointed his opponent of the previous year, the Nazi leader Adolf Hitler (1889-1945), as Reich chancellor. Carefully incorporated into the public festivals of the new regime, he played a crucial role in the establishment of the Nazi dictatorship. 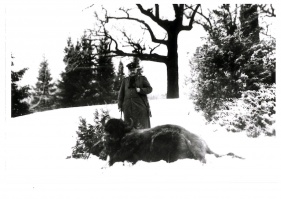