A minority section of the women’s movements opposed World War I and organized the International Congress of Women at The Hague in April 1915. Its participants demanded women’s rights and more democracy in politics as a precondition for peace. Congress members founded the International Committee of Women for Permanent Peace, which became the Women’s International League for Peace and Freedom in 1919.

The First Months of War↑

After the outbreak of World War I, the vast majority of women’s movements in the warring countries supported the war efforts of their home countries, but feminist opposition to the war can be found from August 1914 on. For example, Jus Suffragii, the journal of the International Woman Suffrage Alliance (IWSA), was open to the exchange of pacifist ideas until the end of 1915, when the French wing of the IWSA forced a change in this trend. At the beginning of the war, these first protests were only loosely linked to each other, if at all, and often took on the form of appeals to governments to preserve peace. Such calls and open letters did not focus on analyzing the current political circumstances that led to the outbreak of the war, but condemned war in general as cruel and inhumane. This characteristic of the pacifist movement would remain typical throughout the war and would facilitate international communication among most pacifists, but was strongly criticized by war supporters on each side. For some women pacifists, the first months of the war also served as a transition period where they were able to find their own position towards peace and war.

Although conditions varied considerably from country to country, peace activities suffered from censorship and severe restrictions in all warring nations, whereas women pacifists in neutral countries had more opportunities to show their disapproval of the war. In New York, for example, 1,200 women participated in a silent women’s peace parade on 29 August 1914. Also in 1914, Britain’s Emmeline Pethick-Lawrence (1867–1954) and Hungary’s Rosika Schwimmer (1877–1948) toured the United States of America for several weeks and lectured on peace related topics.

Many women who defined themselves as feminist pacifists were convinced that the characteristics of motherhood and motherly tasks (nourishment, protection and education of children) united women across national borders in the interest of peace, and helped to justify their focus on improving a woman’s rights to promote peace. This argumentation proved to be a very powerful tool used to open both a separate space for women as a field of action, and to gain access to the male dominated political sphere of foreign policy and war.

On 10 January 1915, 3,000 women participated in the foundation of the Woman’s Peace Party in Washington D.C. The program of the party urged for immediate mediation and a convention of neutral nations, and adopted a proposal for continuous mediation, a method developed by the Canadian Julia Grace Wales (1881–1957) in December 1914. In this proposal, mediation was seen as an ongoing process that could provide a forum within which to reach a negotiated peace.

In Europe, discussions about an international women’s meeting started when the IWSA cancelled its congress scheduled for June 1915 in Berlin, and several members asked to transfer the congress to a neutral country. When IWSA support was lacking for any such initiative, a Dutch contingent of women including Aletta Jacobs (1854–1929), Rosa Manus (1881-1943) and Mia Boissevain (1878-1959), encouraged among others by Britain’s Chrystal Macmillan (1872–1937), and Germany’s Anita Augspurg (1857-1943) and Lida Gustava Heymann (1868–1943) began to organize an independent women’s peace congress. To this end, a preparatory meeting took place in Amsterdam in which twenty-seven women hailing from the Netherlands, Belgium, Great Britain and Germany participated, and agreed upon provisional resolutions and terms for congress membership, which included a commitment from all participants not to discuss questions related to war responsibility.

The international congress of women took place at The Hague from 28 April to 1 May 1915 and included more than 1,100 participants. The meeting was chaired by Jane Addams (1860–1935), who would be awarded the Nobel Peace Prize in 1931. Addams was well-known for her work as a social reformer and was one of the founding members of the Woman’s Peace Party. Apart from the Netherlands, participants came from the United States, Canada, Denmark, Germany, Belgium, Great Britain, Italy, Norway, Sweden, Austria and Hungary. Travel restrictions delayed journeys and prevented a number of women from joining the congress.

Congress participants asked for more political rights for women, and for the implementation of democratic measures in politics, such as the right to self-determination for all people along with parliamentary democracy. The congress participants also articulated demands for the establishment of international arbitration, democratic control of foreign politics, general disarmament, free trade and pacifist education. Equity and democracy were both identified as necessary preconditions for a peaceful world order. By asking for women’s suffrage, the congress participants demonstrated their conviction that durable peace was only possible if women had a political influence. Women at the congress subtly combined ideas about well-accepted social norms of motherhood, for example by referring to the wartime suffering of mothers, with radical political demands.

Participants at the 1915 congress also founded the International Committee of Women for Permanent Peace (ICWPP). Its Executive Committee consisted of Jane Addams, Aletta Jacobs, Chrystal Macmillan and Rosa Manus; who were joined by representatives of other national sections in the months to follow. ICWPP sources state that during the war, sixteen national sections were established in Europe, North America and Australia. The Woman’s Peace Party became the US section of ICWPP in 1916. An international office was set up in Amsterdam and was led by Aletta Jacobs and Rosa Manus.

The congress had adopted Wales’ proposal for “continuous mediation” and decided, after a controversial debate, to send two delegations to all warring and neutral states in Europe, as well as to the US, to present the resolutions established at the congress and to emphasize the need for mediation. The delegations succeeded in speaking to the prime, and foreign ministers of each government. The first delegation, led by Jane Addams and Aletta Jacobs, held meetings in The Hague, before traveling during May and June 1915 to the warring nations of Great Britain, Germany, Austria, Hungary, Italy and France. This delegation also visited the Belgian exile government in Le Havre as well as the governments in Switzerland and the Vatican. The second delegation, consisting of American Emily Greene Balch (1867–1961), Hungarian Rosika Schwimmer, Cornelia Ramondt-Hirschmann (1871-?) from the Netherlands, Julia Grace Wales and Chrystal Macmillan, travelled to the Scandinavian countries and Russia. After the first round, some of the delegations’ members revisited a number of European governments, while others focused, largely unsuccessfully, on winning President Woodrow Wilson’s (1856-1924) support for the idea of mediation. Nevertheless, many ICWPP women saw their resolutions as anticipating Wilson’s Fourteen Points Program of 8 January 1918.

The international office and leading ICWPP women worked on keeping international communication alive. This task was increasingly challenging from 1916 onwards: further personal meetings across borders turned out to be almost impossible, mailing routes did not always function, and the financial situation of the ICWPP was insecure. Attempts to organize smaller international meetings, such as executive meetings, failed in 1916 and 1917, and led to great tensions within the organization. Finally, US entry into the war in spring 1917, further limited the ICWPP’s possibilities. In the US, Jeanette Rankin (1880–1973), the first woman elected to the US Congress, voted against the US entering the war – an action that stirred up public debates about suffrage, pacifism and nationalism.

National sections of ICWPP focused on spreading peace propaganda in their home countries and worked for peace, for example, by organizing relief work for foreigners. In the warring countries, all activities were not only strongly restricted by the authorities but were also attacked by nationalist groups. In some countries, for example in Germany and in France, verbal attacks also came from other women’s organizations, who feared that the pacifist minority branch of the women’s movement would damage their reputation. Neutral countries, on the other hand, offered more opportunities to work for peace. In Scandinavia, for instance, several women pacifists supported the Neutral Conference in 1916. Also, the Dutch national section held a national congress in 1917 on the anniversary of the 1915 Hague congress, and the Swiss section organized an international meeting in April 1918. In the later case, participation was limited primarily to Swiss women and women in exile in Switzerland.

The ICWPP and the Peace Conference↑

Already at the Hague Congress, participants had decided to hold a congress at the same time and place as the official peace negotiations, whenever they were to come. After some heated internal debates, the postwar ICWPP congress eventually took place in Zurich from 12 to 17 May 1919. Coincidently, this coincided with the time when the peace conditions for Germany were to be made public in Paris. The idea of meeting in Paris had to be given up, as women from the defeated nations would not have been allowed to enter France. Still, some ICWPP members, among them the Americans Jane Addams, Alice Hamilton (1869-1970), Lillian Wald (1867-1940) and Jeanette Rankin, travelled to Paris before the Zurich congress. Later, participants at the Zurich congress decided to send a delegation to the peace negotiations in France.

About 150 women from sixteen countries who participated in the Zurich Congress and discussed the new political order in Europe, strongly rejected the Versailles Treaty on the grounds that it would act as a source of renewed conflict, especially in conjunction with the allied food blockade. The ICWPP changed its name to Women’s International League for Peace and Freedom (WILPF) and moved its central office, henceforth led by Emily Greene Balch, to Geneva, where it would be close to the League of Nations. Balch was awarded the Nobel Peace Prize in 1946. 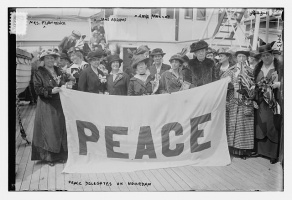 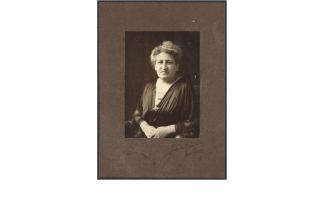 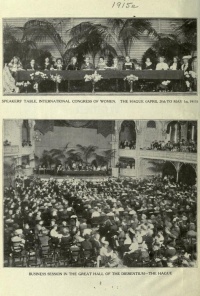 International Congress of Women at The Hague 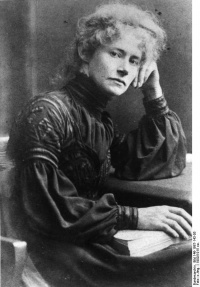 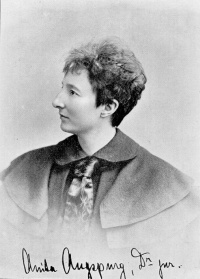 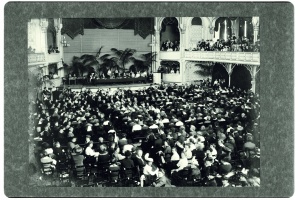 International Congress of Women, The Hague, 1915