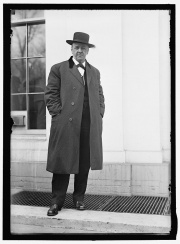 Josephus Daniels was United States secretary of the Navy from 1913–1921. He democratized, expanded, and modernized the United States Navy, preparing it for service in the First World War. During the war Daniels championed the North Sea mining barrage and convoy system to defeat the German U-boat campaign in the Atlantic.

Democratic Party and the Presidential Election of 1912↑

As editor and publisher of the Democratic News and Observer in Raleigh, North Carolina, Josephus Daniels (1862-1948) was a Democratic Party stalwart who supported Woodrow Wilson (1856–1924) in the presidential election of 1912. Wilson rewarded Daniels with the position of secretary of the Navy.

Secretary of the Navy↑

Daniels inherited a tradition-laden military service that was ill-equipped for modern naval warfare. A crusading reformer, Daniels proceeded to democratize and modernize the Navy in the progressive spirit of Wilson’s New Freedom domestic reform agenda. Daniels devoted much time and energy to improving the life of the common seaman. The enlisted men were poor, uneducated, and downtrodden, with little hope for promotion within the service or upward mobility after their enlistments ended. Daniels envisioned each ship and station as a training school dedicated to advancing the intellectual, moral, and vocational development of the sailor. Congress blocked his plan to admit enlisted men to the Naval Academy, but he instituted occupational training programs aboard all ships. He championed compulsory remedial education for illiterate sailors.

A devout Methodist and teetotaler, Daniels concentrated heavily on the seaman’s moral and spiritual health. He increased the number of chaplains in the service and insisted that all ships hold Sabbath services. Daniels worked with city governments to reduce or eliminate prostitution and red-light districts around naval bases. He also prohibited the Navy from issuing condoms to sailors. Believing that prostitution and liquor were closely associated, Daniels issued an unpopular order in June 1914 prohibiting alcohol consumption aboard navy ships and at naval yards and stations.

A staunch proponent of white supremacy, Daniels brought racial segregation to the Navy Department. He extended Jim Crow laws to cafeterias, lavatories, and offices, ending a fifty-year tradition of integration in the Navy’s bureaus. Daniels also joined southerners in the cabinet and in Congress who devised ways to exclude African-Americans from federal employment.

Daniels feared that American involvement in the Great War would destroy Wilson’s New Freedom reforms. He endorsed Wilson’s policy of neutrality and actions in the Arabic, Lusitantia, and Sussex crises, though he worried that the president’s pro-British neutrality would eventually cause Germany to declare war on the United States.

Daniels viewed preparedness as a violation of neutrality and resisted pressure from Big Navy advocates for more dreadnoughts, battle cruisers, and auxiliary ships. Germany’s U-boat campaign changed his mind and he gradually became a Big Navy proponent. In the Naval Appropriations Bill of 1915 Daniels secured funds for a chief of naval operations, naval aviation, and a naval reserve. The office of chief of naval operations gave the service a centralized command structure equivalent to the Army general staff. In July 1915, Daniels created the Naval Consulting Board to provide the Navy technical assistance on the problem of detecting and destroying submarines. In the Naval Act of 1916, Daniels proposed a massive naval construction program to create a two-ocean Navy comparable to those of Great Britain and Germany. He increased funding for naval construction, aviation, and anti-submarine defense in 1917, but never enough to satisfy critics who accused him of leaving the Navy unprepared for war.

Declaration of War and the Homefront↑

Daniels remained one of the last cabinet members to endorse war, but he worked tirelessly to ensure victory once the United States entered the conflict. As a member of the Council of National Defense, he collaborated with Bernard Baruch (1870–1965) and the War Industries Board against monopolists and profiteers. He zealously protected the Navy’s petroleum reserves from oil companies. He negotiated an agreement with Samuel Gompers (1850–1924) to guarantee labor peace in naval plants. Capitalizing on his contacts in newspaper publishing, Daniels worked alongside George Creel (1876–1953) and the Committee on Public Information to encourage voluntary press censorship, particularly of ship movements. Daniels maintained his concern for the moral and physical condition of naval personnel, prohibiting conscripts from brothels and working with local governments to shut down red-light districts near Navy training camps.

Daniels concentrated most of his energies on defeating the U-boat. Convinced that American consumer goods, war materiel, and ground troops would be required to win the war expeditiously, Daniels made the safe passage of merchant ships and soldiers his central focus. He expanded the naval construction program to give the Navy more ships. Recognizing that battleships and cruisers were not going to win the war in the Atlantic, Daniels shifted construction to emphasize destroyers, sub-chasers, and troop carriers. When the war began the United States had 300 ships; by war’s end, it had more than 2,000. He convinced the British to lay a mine barrage in the North Sea to reduce the number of U-boats in the Atlantic. Between June and November 1918, the U.S. and British Navies laid 71,000 mines. Daniels also championed the convoy system to protect commercial shipping and troop transports. Daniels would claim after the war that one of the Navy’s greatest accomplishments was the successful transportation of 2 million American soldiers to France.