Like the other warring nations, the United States had to organize its industries in support of its military effort. The War Industries Board was designed to provide the necessary coordination and control. Despite a halting start, it made significant progress toward meeting its objectives, especially in 1918.

The War Industries Board (WIB) existed from July 1917 to December 1918 to coordinate and channel production in the United States by setting priorities, fixing prices, and standardizing products to support the war efforts of the United States and its allies.

Operating for some time under varying leadership and with limited powers, the WIB did not meet expectations. In 1918, even with considerably expanded authority, a dynamic new chairman, and the full support of President Woodrow Wilson (1856-1924), the WIB failed to coordinate the economy to the degree anticipated. It often had to negotiate with industry rather than direct it, and its chairman Bernard M. Baruch (1870-1965) was never an industrial czar. Terminated immediately after the armistice, the board played no role in industrial reconversion.

Origins of the War Industries Board↑

The United States undertook limited planning for industrial preparedness from 1914 to 1917, as the European experience demonstrated that modern war was total. The creation of a Naval Consulting Board in 1915 led to the appointment of the Committee on Industrial Preparedness, which undertook an important - though incomplete - production census. Members of the Wilson administration and some other individuals such as financier Bernard M. Baruch proposed additional steps be taken. The suggestions included a plan for a “Businessman's Commission” which, given its emphasis on the role of industrialization in national mobilization, clearly foreshadowed the WIB. In addition to writing a proposal for the commission, Baruch ventured to offer suggestions for expanding the personnel structure of the army.

A Council on National Defense (CND), consisting of the Secretaries of Agriculture, Commerce, Interior, Labor, Navy, and War, was established in 1916 to study major industries in the United States, to analyze the relationships of these industries to military needs, and to coordinate industrial mobilization in case of war. Supplying the armed forces proved challenging on multiple levels. The army in particular lacked the ability to purchase equipment and supplies quickly and efficiently. Elements of the army continued to compete with the navy, as well as among themselves for critical raw materials and finished products. The navy, given its experience with relatively large-scale expenditures, adapted to the wartime environment better than the army, but it too lacked discipline in its purchasing.

To address these issues, some political leaders advocated establishing a structure similar to the Ministry of Munitions in Great Britain. However, such centralization would have violated political and economic patterns in the United States. Instead, President Woodrow Wilson set up the WIB within the CND on 28 July 1917. The WIB was largely the creation of executive orders and ad hoc arrangements rather than statutes. It remained in Secretary of War Newton D. Baker's (1871-1937) sphere of control, although it achieved increasing independence. Despite the incremental enlargement of its powers, the WIB did not centralize industrial mobilization fully: for example, the armed forces continued to establish their own procurement priorities. Baker had opposed the establishment of the WIB, and his hostility toward the organization limited its effectiveness. He believed that existing cabinet-level departments could administer the war effort, wherefore new independent structures were unnecessary. Specifically, he supported the War Department and its various bureaus in their conflicts with the WIB, owing to his confidence in its military officers and civilian managers.

Pressing economic mobilization problems finally forced Woodrow Wilson to strengthen the WIB, and to appoint Bernard M. Baruch as its chairman on 4 March 1918. When acting on the authority of the Departmental Reorganization Act (Overman Act) of 1918, Wilson also established the WIB as a structure separate from the CND, which marked a major step in its development.

The WIB was a complex organization and its structure adapted to meet new challenges. It had to establish military and naval requirements while streamlining the ordering process for goods and raw materials and the use and the transportation of various commodities. Employing the increased powers conferred on the WIB by President Wilson, Baruch established a Priorities Committee and a Priorities Division.

Setting priorities meant that manufacturers who failed to cooperate with the war effort could be cut off from access to the materials they needed for their other products. Nevertheless, Baruch found that he had to negotiate with larger industries such as motor vehicles and steel rather than simply set policies and issue decrees.

In addition to the Priorities Committee and the Priorities Division, there were numerous Commodity Sections and War Service Committees. The Price Fixing Committee was not part of the WIB, but it operated as one of its components. The WIB also had a Foreign Mission that fulfilled an important and sometimes forceful role in negotiations with the Allies. Even while fighting continued, the United States and the Allies jockeyed to secure advantageous positions for their industries because they anticipated severe post-war international economic competition. Owing to increasing numbers of orders from the Allies for military and other goods between 1914 and early 1917, United States industry had converted its production in part to military needs and had learned what was required by modern military organizations. This experience assisted business firms and the government in making even more adjustments to production patterns in 1917-1918, once the United States entered World War I. Allied needs, however, often competed with American requirements and so an Allied Purchasing Commission (APC) was added to the WIB to balance domestic and foreign requirements, though it never had enough authority to control competitive purchasing fully.

A legend developed during and after World War I that Baruch was an economic "dictator." In fact, the WIB functioned largely through voluntary cooperation, although it had extensive authority and the full backing of the president. Because it did not govern the entire United States economy, it had to work closely with the War Shipping Board, the Food Administration, the Fuel Administration, and the Railroad Administration to achieve its goals.

Although many firms were prepared to work cooperatively to fill war orders, they were also cautious in view of long-term governmental and popular hostility toward business combinations such as trusts. Despite the flexibility in anti-trust policy imposed by the war, elements of the administration were concerned about business collaboration. Indeed, one of the functions of the WIB was to reconcile the requirements of the war effort and the persisting suspicion of collusion among business firms and between business and the federal government.

The WIB disbanded quickly after the Armistice. Therefore, it was not involved in reconversion. Many governmental and business leaders were convinced that national planning through business-government cooperation, as exemplified by the WIB experience, was the way for solving economic problems in the United States and avoiding crises. However, there were differences of opinion about relative advisability of emphasizing industrial self-government or intensified governmental regulation. In the immediate post-World War I period, concern focused on maintaining industrial prices and on the perceived need to relax anti-trust legislation and enforcement. An Industrial Board within the Department of Commerce tried briefly to control prices by reducing rather than raising them. It did not survive, owing to concerns about conflicts between board actions and the anti-trust statutes.

Despite its shortcomings and relatively brief existence, the WIB was a major step in the development of national planning in the United States, and its precedents were influential during the New Deal and World War II. Increased trade association activity in the 1920s transitioned into the National Recovery Administration (NRA), which was established by the Franklin D. Roosevelt (1882-1945) administration in 1933. The aim was to combat the effects of the Great Depression by providing the kind of government-business cooperation that the WIB introduced during World War I. Hugh S. Johnson (1881-1942), who had been the Army's representative on the WIB, headed the NRA during its brief existence which lasted from 1933 to 1935. 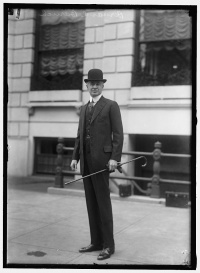