Major drawbacks of these designs included difficulty in fire control for the different caliber ammunition. Also, the steam engines required lengthy periods in port for maintenance overhauls and could not be run at full speed for very long without risking breakdowns.

Early in the 20th century, British Admiralty leaders learned of plans by American, Italian and Japanese navies to design and build “all big gun” battleships, a concept publicized by Italian naval engineer Vittorio Cuniberti (1854-1913) in 1903. Led by First Sea Lord, Sir John Fisher (1841-1920), British decision makers designed the HMS Dreadnought to steal the lead on the plans of other navies and launch a battleship that would outfight any ship afloat.

Fisher’s team produced a design that incorporated a number of innovations into a single hull. Chief among HMS Dreadnought’s design characteristics was a main battery of ten 12-inch guns, mounted in five twin-turrets. The turrets were arranged with one at the bow, one on each wing of the ship’s bridge, and two along the centerline to the rear of the superstructure. Thus, the arrangement allowed the ship to fire eight heavy guns in a broadside, as compared to contemporary battleships that could answer only with four heavy guns. HMS Dreadnought possessed no intermediate battery, making fire control and ammunition storage less difficult.

Other features included turbine steam propulsion - the first use of lighter, dependable and efficient turbine engines in a battleship. These new engines allowed HMS Dreadnought to steam at almost twenty-one knots continuously, providing a speed advantage over potential enemy ships that would allow fleets to better close with a retreating enemy, avoid a more numerous enemy, or evade a torpedo threat when present. Dreadnought also featured redistributed armor to protect guns, engines, and magazines more effectively. Finally, an innovative bulkhead structure in the interior of the ship made flood control easier, providing better survivability.

A hybrid heavy cruiser design, called a battlecruiser, featured similar characteristics, but possessed less heavy armor and fewer large guns to provide for even higher speed. Fisher’s concept for the battlecruiser was for it to be able to chase down any ship it wanted to attack, as well as be able to run from anything more powerful. When necessary, the battlecruiser could join the battle fleet and serve alongside Dreadnought battleships, since its large guns could provide a similar offensive capability.

Taking advantage of guns and turrets already completed for other ships and using other prefabricated construction, HMS Dreadnought was laid down in February 1906 and commissioned in December of the same year, a remarkable construction record for the time. By comparison, the US Navy’s first Dreadnought-style battleships, the USS South Carolina and USS Michigan, were laid down in December 1906 and not completed until early 1910. Thus, in a single stroke Fisher and the Royal Navy stole the lead on other navies planning to produce an “all big gun” battleship and made all other battleships obsolete.

As newer and larger Dreadnought designs joined the Royal Navy, the original vessel served as flagship for the Home Fleet from 1907 to 1911. During the First World War, HMS Dreadnought gained fame by being the only battleship to sink a submarine when she rammed U-29 in March 1915. During the Battle of Jutland, she was in refit and thus never actually fired a shot in anger during the war. After the war, she was sold for scrap along with most of her consorts and broken up in early 1923.

Indeed, HMS Dreadnought provided her name to a new concept for battleship design that would continue to improve through the Second World War. The world’s final battleship class afloat, the US Navy’s Iowa class that served until the 1990s, owed its existence to the Admiralty’s leaders from the early years of the century. 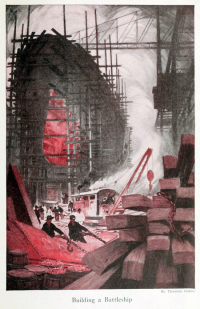 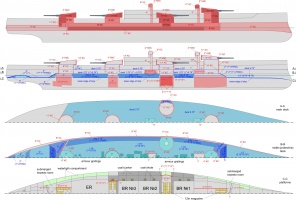