On 31 May/1 June 1916 the British Grand Fleet and the German High Sea Fleet clashed at Jutland. It was the largest naval battle in history until the Battle of Leyte Gulf off the Philippines in 1944, involving 151 British and ninety-one German warships. Although the German vessels inflicted heavier losses upon its enemies, they were unable to change the strategic situation and break the British blockade.

When war broke out in 1914, most people expected a decisive battle off Heligoland. Instead, both sides remained on the defensive for fear of losing important parts of their forces. While the Grand Fleet could achieve its main objective – cutting off Germany from all sea-routes into the open Atlantic by establishing a distant blockade, the German High Seas Fleet was unable to challenge its enemy without risking severe losses.

The Battle of Jutland↑

In January 1916 Vice Admiral Reinhard Scheer (1863-1928) was appointed Chief of the High Seas fleet. Contrary to his predecessor he wanted to act more offensively. However, due the enormous superiority of the Grand Fleet, Scheer only wanted to lure out, trap and destroy parts of it. Thus he hoped both to whittle down British naval strength and to improve Germany’s strategic situation in a future decisive battle. Thus, the High Seas Fleet planned an operation against British merchant vessels operating off the south coast of Norway hoping that this would lead to an encounter with smaller parts of the Grand Fleet. In order to improve his chances several submarines were deployed on strategic positions.

However, when the High Seas Fleet left port on 31 May, the Grand Fleet was already at sea. Having broken the German naval code as early as 1914, Admiral John Jellicoe (1859-1935), Commander-in-Chief of the Grand Fleet, was fully aware that his German counterpart obviously intended a bigger naval action.

This action began at 15.22 hrs (GMT) with a clash between the battlecruisers of the two fleets. Commanded by Vice Admirals Franz von Hipper (1863-1932) and David Beatty (1871-1936) this encounter, which happened more or less by accident, ended with the loss of two British battlecruisers whereas Hipper’s force suffered only minor losses. Hipper’s intention to draw Beatty’s ships within range of the approaching High Seas Fleet failed, however. Instead, Beatty’s turn to the north drew the Germans towards Jellicoe’s Grand Fleet. However, before the two main fleets eventually met, the battlecruisers clashed again. While Hipper’s own flagship, SMS Lützow, was severely damaged and had to be given up, the British lost another of their battlecurisers, HMS Invincible.

Due to poor visibility, Jellicoe was able to deploy his fleet into a battle line at 18.15 hrs without being noticed by Scheer, thus famously crossing the T of the High Seas Fleet. Under heavy fire Scheer disengaged by ordering a 180 degree turn of his vessels. At 19.15 hrs Scheer again ran into the whole Grand Fleet, escaping only with a second 180 degree turn. At the same time, he ordered an almost suicidal attack of his torpedo boats thus forcing the British ships to change course. By this time many vessels of the High Seas Fleet had suffered severe damages already by heavy British fire.

Whereas Jellicoe tried to avoid a night action due to the deficiencies of the Grand Fleet in night fighting, Scheer headed for home as fast as he could with his mauled ships. Nevertheless, parts of the respective fleets clashed again during the night causing further losses on both sides. Jellicoe’s attempt to intercept the German fleet on its way back failed due to erroneous signals and misunderstandings. In the early morning hours Scheer’s fleet finally reached Wilhelmshaven.

Who Won the Battle?↑

Having reached home safely, the Germans claimed victory. Regarding the number of losses of men and material, they were right. The Grand Fleet had lost 6,094 men, three battlecruisers, three armored cruisers and eight destroyers (113,000 tons). The High Seas Fleet had lost only 2,551 men, one battlecruiser, one pre-dreadnought, four light cruisers and five torpedo-boats (62,300 tons). Apart from the fact that Grand Fleet could make up these losses more easily than the Germans due to its great superiority, the more important aspect is that even if one is inclined to call the Battle of Jutland a German tactical victory, it did not change the strategic situation.

Already during the war, the Battle of Jutland became a myth. German heroism had obviously achieved an important victory over the “perfidious Albion.” Streets and places were named after the battle, a Skagerrak Tag (Jutland Day) was introduced. This myth only faded away in the mid-1960s. In Britain the battle never had this importance, neither in the navy nor among the people, for it was regarded as a missed opportunity to annihilate the enemy. 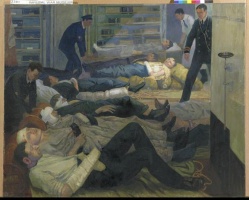 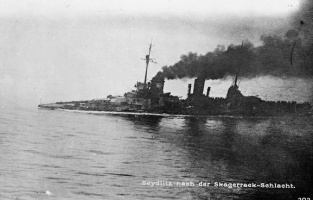 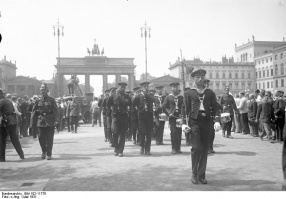 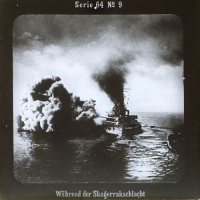