Room 40 was a highly secretive British intelligence organization within the directorate of intelligence of the Admiralty. Its primary task was to intercept and decrypt German wireless and telegraph messages. It also intercepted some diplomatic traffic, including the infamous Zimmermann Telegram.

Intelligence before the Great War↑

One of the many unintended consequences of World War I was the establishment of permanent, bureaucratic intelligence apparatuses. Prior to the Great War, spying on one’s foes was a task undertaken generally for short periods, for specific reasons and only by a few, well-trusted individuals. Few standing intelligence organizations existed across Europe before 1914. Those that did were small and of narrow focus. The exigencies of war, however, necessitated a systematic approach to the collection, analysis and dissemination of large quantities of information about the enemy. Arguably the single most important type of intelligence in the Great War was counter-artillery intelligence; however, the most prolific form, and the greatest contributor to the rise of modern intelligence organizations, was signals intelligence (SIGINT). While nearly every major European power exploited this relatively new form of intelligence, no organization better understood the need for systematic intelligence processing or experienced such noted achievement as Room 40 of the British Admiralty.

The success of Room 40 is in many ways owed to happenstance. Within the first months of the war, British naval intelligence acquired three German naval codebooks, all in a unique fashion. The Royal Navy seized the Handelsverkehrsbuch from a German merchant ship off the coast of Australia; the Russians shared a copy of the Signalbuch der Kaiserlichen Marine (SKM), which they captured from a German ship that had ran aground in Estonia; and a British trawler turned over the Verkehrsbuch after catching it off the coast of the Netherlands. These were but three of many codebooks utilized by the Germans. Each was of a different value and Germany would eventually replace all of them at some point during the war. However, early British success at acquiring these highly-classified documents, particularly the SKM, coupled with decades of German investment into its High Seas Fleet, gave the Admiralty great impetus to create an internal intelligence function devoted to German naval activities. The sheer number of intercepted messages and burden of decryption and analysis demanded a standing organization; thus, in November 1914, the newly appointed director of naval intelligence, Captain William Reginald “Blinker” Hall (1870-1943), moved his burgeoning intelligence staff out of the main Admiralty building and into an area of the Old Admiralty Building labeled Room 40.

While the imperative for Room 40 was indisputable, the organization initially struggled because of the technological and mathematical challenges characteristic of SIGINT. A lack of financial resources and human capital from the outset only compounded these problems. Its earliest failure was not detecting a raid by the High Seas Fleet in December 1914 against the British port towns of Hartlepool, Scarborough and Whitby, which ultimately killed over 100 British civilians and injured more than 500 others. However, Room 40 redeemed itself one month later when it decoded messages outlining plans by the High Seas Fleet to attack British fishing vessels in the Dogger Bank of the North Sea. The timely interception and decryption of signals gave the Admiralty sufficient warning to dispatch its Grand Fleet, and ultimately contributed to British victory at the Battle of Dogger Bank when the Germans were caught off-guard. Room 40 likewise performed admirably in late May and early June 1916 when it intercepted German orders to move the High Seas Fleet into the North Sea in an attempt to lure the Grand Fleet into battle. Not only did Room 40 provide advance notice to the Grand Fleet, it also provided regular updates about the position of the High Seas Fleet until the Battle of Jutland began, and provided an accurate assessment of German losses after the battle.

One of the greatest organizational and long-term successes of Room 40 was its use of traffic analysis to detect the movement of German ships and U-boats. Traffic analysis was necessary when analysts could not break a signal and read the transmission. Instead, by using direction-finding stations, analysts could geolocate the origin of the signal, and thus identify the location of the vessel. Knowing even basic information about the type of signal gave the British an overview, updated daily, of German naval force disposition. This was particularly important during the U-boat campaign when Room 40 could display the location of German submarines and Allied ships on large maps in the Admiralty’s War Room, and then identify those vulnerable to attack. However, such identification did not necessarily mean protection. One of the endemic problems of intelligence is the critical decision of how to act upon it, if at all. Those few in the British government privy to Room 40 intelligence were anxious that acting on every piece of information (i.e. trying to protect every ship known to be under threat of a U-boat) would tip off the Germans, inducing them to change their communication practices and thus deprive Britain of valuable intelligence. Conversely, others questioned the purpose of intelligence that could not be acted upon. The Admiralty often developed ingenious, but not imperfect, mechanisms to obfuscate the source of intelligence. For example, when Room 40 intercepted and decrypted the Zimmermann Telegram, the Admiralty and foreign office developed elaborate lies, one for the U.S. government and the other for the general public, about how they acquired the telegram. The need for deception was heightened in this case by the fact that Room 40 was actively collecting signal intelligence against the United States.

Ultimately, Room 40 rose to the challenge not only of providing invaluable information about the enemy to the Royal Navy and British government, but of serving as the vanguard of modern intelligence organizations responsible for collecting, analyzing and disseminating a plethora of data within a much larger, often rigid, overly-compartmentalized, bureaucratic system. The success of Room 40 during World War I was integral to the challenges two decades later, when yet again Britain turned to its SIGINT analysts to gain an advantage over the enemy. 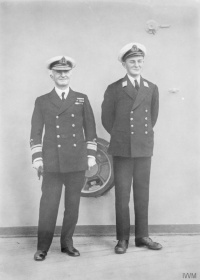