The Grand Fleet was Britain’s most important manifestation of sea power in World War I. As the primary instrument of blockade in the North Sea, it was tasked with denying Germany the succor of oceanic trade while also holding that state’s most formidable assemblage of naval might, the High Seas Fleet, in check throughout the war.

A month and a day after the assassination of Franz Ferdinand, Archduke of Austria-Este (1863-1914), Britain moved the Grand Fleet, formerly the First Fleet, to its wartime station at Scapa Flow. With hostilities likely, the Royal Navy had peremptorily moved into position to block Germany’s access to the Atlantic. Containing a superior number of all types of warships, and most importantly a greater number of dreadnoughts, the Grand Fleet possessed sufficient strength to enforce a distant blockade for the duration of the war. Indeed, as the conflict progressed, the Grand Fleet would increase in strength from twenty-one dreadnoughts in the summer of 1914 to approximately thirty-five (including a squadron of five American battleships) by the time of the armistice.

Initially under the command of Sir George Callaghan (1852-1920), the Grand Fleet was handed over to Sir John Jellicoe (1859-1935) on the day Britain declared war against Germany. Jellicoe would preside over the Grand Fleet’s watch on the North Sea until being made First Sea Lord in November 1916. During his tenure as commander-in-chief of the Grand Fleet, Jellicoe was responsible for setting the conditions of the blockade and leading the fleet in its biggest engagement, the Battle of Jutland (31 May to 1 June 1916).

With over twenty dreadnoughts in service from the war’s outset, the Grand Fleet was almost twice as numerous in that key class of ship as its German rival. Indeed, considering that the British also mounted heavier caliber guns, the hitting power of the British set the parameters for the conduct of the war in the North Sea. Specifically, the Germans sought to avoid encounters with the concentrated might of the Grand Fleet, opting instead to seek engagements that would allow for its defeat in detail.

With the Grand Fleet’s potency derived from its superiority in dreadnoughts, the need to sustain so many large warships dictated how and where the British deployed it. Primarily, the main striking force of the Grand Fleet operated from Scapa Flow, while the battlecruisers of Sir David Beatty (1871-1936) took station at Rosyth, on the Firth of Forth. The size and strength of the Grand Fleet was a limiting factor in its employment throughout the war. A fleet that large could not remain at sea for extended periods, and its maintenance was one factor that contributed to the choice of distant blockade.

Distant blockade, as opposed to close blockade, was also preferred for reasons of safety. The threat posed by relatively inexpensive weapons, namely mines and submarines, made it prudent to keep the dreadnoughts and battlecruisers well away from waters in close proximity to the High Seas Fleet. Thus, the Grand Fleet, despite having a significant advantage in signals intelligence, was hard-pressed throughout the war to concentrate against German sorties.

By far the best-known and most important naval engagement involving the Grand Fleet was the Battle of Jutland. The High Seas Fleet, commanded by Reinhard Scheer (1863-1928), sortied in the hopes of isolating and destroying Beatty’s command before Jellicoe could respond. However, owing to superior signals intelligence, the Grand Fleet managed to meet the threat from Scheer before he could finish Beatty’s force. At the end of the engagement the Germans could claim a tactical success, having destroyed more ships than the British, but operationally and strategically the fight confirmed Britain’s command of the seas.

In November 1916, Jellicoe was replaced as commander of the Grand Fleet by Beatty. Although the Germans would sortie again, there were no more fleet actions in the North Sea. Despite its failure to engage the Germans in an industrial-age version of the Battle of Trafalgar, the Grand Fleet had accomplished its task. 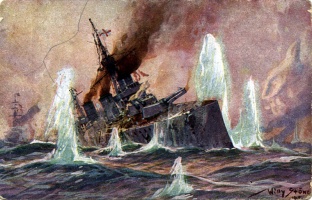 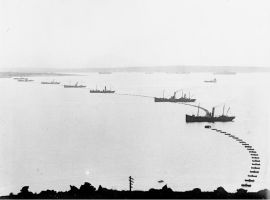 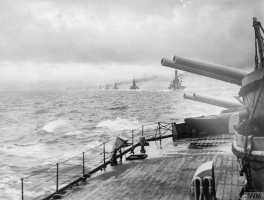 Cruising through the Firth of Forth