Mine warfare or mining are the terms used to describe the digging of tunnels under the enemy’s line in order to place explosives to destroy a key location, to prevent an enemy from digging tunnels, or to protect one’s own tunnel diggers and tunnels.

The use of mining to undermine enemy defenses has been around since ancient times, as mining had long been a key part of siege warfare. Despite this fact, mining and mine warfare have become synonymous with the experience and landscape of the Western Front. During the war, mining became an important part of trench warfare and both sides devoted enormous energy to the construction of tunnels and mines as well as to counter enemy mining. Mining operations required large numbers of men and enormous quantities of explosives, but they offered the potential to undermine and destroy key parts of the enemy’s line thus allowing men on the surface to attack successfully. The use of mining seemed to offer a solution to the worst problems of trench and attrition warfare. Mine warfare was most famously used during the fighting on the Somme in 1916, Messines Ridge in 1917, and at Vauquois (near Verdun) where tunnels, mines, and counter-mines were dug for much of the war. With the return of more mobile warfare in 1918, the need for mine warfare correspondingly diminished.

Purpose of Mine Warfare↑

The relatively rapid establishment of lines of trenches from the Belgian coast to the Swiss border and the immense difficulty in breaching them, meant that armies looked for alternate means to do so. Very quickly, soldiers on both sides started to treat trench systems as they would an enemy fortress and they began to conduct siege operations. Rather like collapsing a wall in a medieval castle, the purpose of mining was to allow soldiers to cross, albeit underground, the no-mans-land that separated the sides and destroy key enemy positions in order to facilitate an advance on the surface. Furthermore, the shock of such huge unexpected explosions caused immense fear and stress in soldiers not killed by the blasts and contributed to their demoralization. However, the explosions also sometimes caused such damage that the landscape became even more difficult than normal to cross, thus slowing down an attack and preventing its exploitation and defeating the main purpose of the mine.

Given the demands of underground fighting and tunneling, this was a job for specialists and there were few soldiers trained in the techniques of mine warfare in 1914. The Germans, however, had formed some units of siege engineers prior to the war as they had anticipated their requirement in order to attack the French and Belgian fortresses as part of the Schlieffen Plan. Thus, the Germans led the way at the start of the war, although by its end all the main protagonists had created units dedicated to the purpose of mine warfare and tunneling. Often men were recruited from the peacetime mining, construction, or engineering industries of the various countries as such men typically possessed many of the skills and much of the knowledge required to construct underground mines. Mining required specialists largely because the work was dangerous, often technical, extremely physical, and frequently carried out in near darkness. Furthermore, the confined spaces the men had to work in meant that few were mentally able to work as miners. Hence, the creation of the specialist mining units mentioned above. These units of specialists typically deployed to areas of the front to prepare mines for major offensive operations or to counter-mine against enemy mining operations.

The Somme, Messines Ridge and Vauquois↑

The first day of the Battle of the Somme in 1916, the Battle of Messines in 1917, and the fighting around Vauquois provide some of the most famous examples of mining operations. All of these involved the use of tunneling to place large amounts of high explosives under critical locations. The British mines used on 1 July 1916 were the largest man-made explosions in history up to that point (the British filmed the Hawthorn Ridge mine explosion), but the British mines under Messines Ridge surpassed even these. The British mines at Messines Ridge collectively remain one of the largest non-nuclear explosions in history. Vauquois is famous more for the fact that it was one of the most mined and tunneled locations of the war. Indeed, the two sides detonated over 500 mines leaving a cratered landscape in what had been a hilly area with a village.

Mining was a crucial part of trench and attrition warfare as it facilitated the destruction of key enemy positions in static warfare. However, due to the long time it took to construct mines and the immense efforts required to do so, once armies became more mobile in 1918 the use of mining waned. 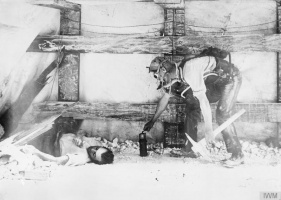 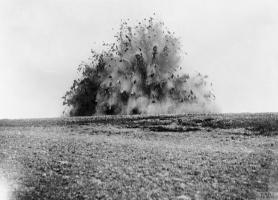 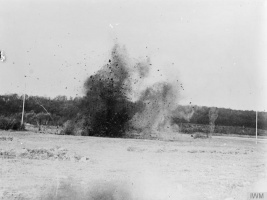 Mine on the Western Front