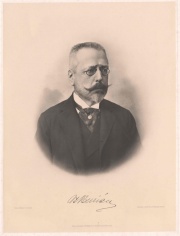 A member of the Hungarian middle nobility, István Burián (1851-1922) was born in Stampfen/Stomfa, located northwest of Pressburg/Pozsony, in the Austrian Empire. Burián’s formative years were shaped by the instability of the 1848 revolutions and the Monarchy’s subsequent reorganization into the Austro-Hungarian Empire in 1867, giving him an unusual mix of liberal and conservative Protestant values.

Burián was ambitious and committed to his diplomatic career, despite a reputation for being a withdrawn and aloof intellectual. He prized the Magyar minority position within the Hungarian half of the Monarchy, while still being fiercely loyal to the imperial Crown. Trained as a diplomat and possessing a keen interest in Eastern Europe, Burián never veered from the region of his specialization. After several minor postings, his first major role was consul general in Moscow, then consul general in Sofia (1887-1895). He then served as minister in Stuttgart (1896-1897), followed by Athens (1897-1903). Burián was unexpectedly named common finance minister in Vienna, a role he held for nearly a decade (1903-1912). This was a breakthrough, with excellent career opportunities at the highest levels of government. Given the peculiarities of the Dualist system, the territory of Bosnia-Herzegovina was administered by neither of the two halves of the Monarchy, but rather by the Finance Ministry. Under Burián’s governorship, espionage was scaled back, Serbs and Muslims granted cultural autonomy, and preliminary censorship removed. Burián sought to prepare Bosnia-Herzegovina’s full constitutional incorporation into the Monarchy, supporting the province’s annexation. His attempts at neutralizing Serb nationalism through non-confrontational methods such as increased cultural rights had mixed results and brought him into conflict with Austrian/Catholic circles and even the Emperor, all of whom saw the Serbs’ Russian connections as a regional threat.

Foreign Minister During World War I↑

Leaving the Finance Ministry in 1913, he returned shortly afterwards as the Hungarian minister a latere, the Hungarian Cabinet’s representative to the Emperor. His friend and mentor, the powerful Hungarian Prime Minister István Tisza (1861-1918), engineered the replacement of Foreign Minister Leopold Berchtold (1863-1942) in January 1915 and helped maneuver Burián into the role. In the absence of a common prime minister, the common foreign minister’s influence, particularly with the Emperor, stood above his peers’. Despite pursuing a stubborn and harsh foreign policy aimed at frightening Romania and Italy into continued neutrality, supported by Tisza in his hard line, Burián was no puppet and closely guarded the Foreign Ministry’s prerogative in foreign policy-making. His loyalties lay unquestioningly with the Gesamtmonarchie and at no time did he adopt exclusively Magyar standpoints. Burián’s ascent to the Foreign Ministry, therefore, marked a new period of strong, at times dogmatic, diplomacy. Unable to deter first an Italian and then a Romanian entry against Austria-Hungary in 1915 and 1916 respectively, his first tenure was also marked by intense debate about Austria-Hungary’s war aims in the Balkans and Poland, including the so-called Austro-Polish solution of tying a dependent Polish entity to the Habsburg scepter. Burián sought territorial adjustments and the establishment of satellites and protectorates in Serbia, Montenegro, and Albania to keep the South Slavs contained and isolated. He faced down strong criticism from the army, which pursued an annexationist policy. Given Austria-Hungary’s reliance on its allies Germany and Bulgaria, Burián also faced a strong adversarial challenge in the Balkans, which the Monarchy considered its historic backyard. Due to Burián’s determined policy and aided by the army’s defeats, he kept control of the foreign policy agenda until his dismissal in December 1916.

Following Francis Joseph, Emperor of Austria’s (1830-1916) death in November 1916 and his great nephew Charles I, Emperor of Austria’s (1887-1922) ascension to the throne, many former leaders, including Burián and Tisza, were dismissed. Unlike his mentor, however, Burián remained active in high policy, taking up his previous role as finance minister. During this period, although the military situation improved for Austria-Hungary, the domestic situation worsened dramatically. After the Sixtus embarrassment, Charles surprisingly recalled Burián to the Foreign Ministry in April 1918. He hoped to secure favorable terms for Austria-Hungary in a general peace treaty, but Allied sympathies declined due to Vienna’s unwillingness to break its ties with Germany. Raised to the title of Graf (Count), Burián resigned on 24 October 1918 as the Central Powers were suing for peace and the Austro-Hungarian union was being dissolved. Unlike Tisza, Burián survived the war and, after completing a brief memoir, died in Vienna on 22 October 1922.

Although he was criticized as being doctrinaire, inflexible, and a Balkanist without a wider purview, Burián had a clear vision to protect Austro-Hungarian prestige, integrity, and power, which he was determined to uphold in face of compounding internal and external pressures.