The Imperial and Royal Ministry of the Imperial and Royal House and of Foreign Affairs, informally called “Ballhausplatz” after the Viennese square on which the central office was located, was one of only three joint ministries of Austria-Hungary. Foreign Minister Leopold Berchtold played the dominant role in the decision-making process in Vienna that led to war in the summer of 1914.

Organization of the Ministry↑

The Foreign Ministry was one of only three joint ministries of Austria-Hungary, the other two being War and Finance. The Foreign Ministry remained divided throughout the war into its customary three branches: central office, diplomatic corps, and consular service. The structures of the central office expanded in an ad hoc way to deal with problems that arose in the wake of the conflict, e.g. the future status of Poland. Even so, no major reorganization occurred, nor was there any substantial revamping of personnel. As many standing missions abroad closed as a result of war, Austria-Hungary compensated by opening diplomatic “representations” in occupied territories, including Belgrade, Brussels, and Kiev.

Foreign policy in Austria-Hungary remained the constitutional prerogative of the monarch. Major foreign policy issues - including the response to Franz Ferdinand, Archduke of Austria-Este’s (1863–1914) assassination - were debated in the Joint Ministerial Council, a collegial body to which the Austrian and Hungarian minister-presidents, Count Karl Stürgkh (1859–1916) and Istvan Tisza (1861–1918), and the three joint ministers belonged ex officio. In 1914, the Council was “the crucial forum for decisions affecting the development, coordination, and execution of Habsburg strategic policy.”[1]

Despite his reputation for vacillation, Berchtold dominated the policy debate after the assassination in Sarajevo. From the beginning, he pressed for “a final and fundamental reckoning”[2] with Belgrade. In early July, the Foreign Minister Count Leopold Berchtold (1863-1942) dispatched one of his most bellicose advisors, Count Alexander Hoyos (1876–1937), to consult with Austria-Hungary’s main ally, Berlin. The “Hoyos Mission” yielded the famous German “blank check” for decisive Austro-Hungarian action against Serbia. This support strengthened Berchtold’s hand in the Joint Ministerial Council, where he had been faced with the Hungarian minister-president’s opposition to a confrontational stance. Even before this support was secured, the Foreign Ministry began drafting an ultimatum to Serbia, and Berchtold proved skillful in misleading the other powers and public opinion about Austria-Hungary’s actual intentions. Generally speaking, the decision-making process in Vienna throughout the crisis was characterized by a narrowness of perspective and little attention “to the question of whether Austria-Hungary was in any position to wage a war with one or more other European great powers."[3]

Early on, high priority was given to keeping potentially hostile states, especially Italy and Romania, out of the conflict, and bringing others, particularly the Ottoman Empire and Bulgaria, in on the side of the Central Powers. The problem of territorial concessions to achieve certain aims bitterly divided policymakers. Ultimately, it cost Foreign Minister Berchtold his job when he proposed sacrificing the Trentino to Italy. As the war progressed, questions of ultimate aims and the post-war order were attended by the increasing subordination of Austro-Hungarian interests to its ever more dominant German ally. This was apparent in the problem of future hegemony in Poland, but also in the disagreement about the conditions to be imposed on defeated Russia at Brest-Litovsk. Foreign Minister Ottokar Graf Czernin’s (1872–1932) decision to pin his hopes on a German military victory led him to disavow, in the famous Sixtus Affair of April 1918, the peace feelers that Charles I, Emperor of Austria (1887–1922) extended to France and even to press for the latter’s withdrawal from government.

Dissolution of the Ministry↑

The former Imperial and Royal Foreign Ministry paradoxically survived Austria-Hungary’s dissolution for nearly two years. A number of states, such as Switzerland, maintained diplomatic relations with the Ministry rather than with the successor states. It continued to be headquartered on the Ballhausplatz, and its agenda primarily involved the liquidation of Austro-Hungarian assets.

Leading officials in the central office↑ 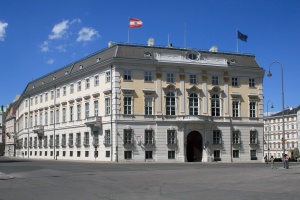