The Yildirim (“lightning” or “blitz”) Army Group was a special Ottoman-German army group during World War I. It was largely Ottoman, though commanded by Germans, and operated in Ottoman lands. The group was known as the Yıldırım Ordular Grubu (Thunderbolt Army Group of the Ottoman Empire) in the Turkish language or Heeresgruppe F (Army Group “F”) in the German language.

The project to create an elite Ottoman military group led by German staff was formulated after the Arab Revolt (1916) and the fall of Baghdad (1917).[1] One of its goals was the reconquest of Baghdad and Iraq which were captured by British forces on 11 March 1917. In addition, the German general staff aimed at promoting control of the Ottoman Middle East.

On 24 June 1917, Ottoman Minister of War Enver Pasha (1881-1922) convened in Aleppo with four army commanders, Halil Pasha (1882-1957), Djemal Pasha (1872-1922), Mustafa Kemal Pasha (1881-1938), and Izzet Pasha (1864-1937), to propose the formation of a new Ottoman army group under German command aimed at the recovery of Baghdad. Despite the opposition of all Ottoman army commanders, who considered the project unrealistic, the Yildirim Army Group was formed in summer 1917. The prospect of German command remained unwelcome.

The German military headquarters was composed of sixty-five German officers and nine Ottoman officers.[2] The German government paid £5 million in gold to outfit the Yildirim Army Group, which had its own budget. The Yildirim Army Group’s members hailed from the 4th, 6th, 7th, and 8th Ottoman armies and from the German Asia Corps (Asien-Korps or Levantekorps, also known as the “Pasha II Expedition”).[3]

Nominated by Enver Pasha, General Erich von Falkenhayn (1861-1922) arrived in the Ottoman Empire with a group of German military personnel to create the joint Ottoman-German unit. However, his nomination was contested by Djemal Pasha and Mustafa Kemal Pasha.

Mustafa Kemal Pasha, in a detailed report submitted on 20 September 1917, advocated to adopt a defensive strategy serving Ottoman rather than German interests, warning that the Ottoman Empire was becoming a German colony. He proposed focusing the military effort on the Sinai front. Indeed, the unequal “cooperation” between the Ottoman and German military had led to extremely tense relations.

After a major dispute with von Falkenhayn, Mustafa Kemal Pasha refused to serve under his orders and resigned from his post on 4 October 1917. Fearful for his own authority in Palestine, Djemal Pasha did not approve Yildirim’s strategic plan. As a consequence, Djemal Pasha was dismissed by Enver Pasha as commander of the 4th army and was assigned to Damascus. Von Falkenhayn was nominated to the post of Yildirim commander.[4]

Based in Aleppo, the Yildirim Army Group began operations in July 1917. It was focused on retaking Baghdad under the command of von Falkenhayn.[5] However, von Falkenhayn himself considered the reconquest of Baghdad unrealistic. Consequently, the Yildirim Army Group was removed to Palestine at the end of September 1917 with the objective of protecting Gaza from British attacks organized by General Edmund Allenby (1861-1936), who enjoyed a large and well equipped army. The Yildirim Army Group faced huge difficulties during the Palestine campaign. General von Falkenhayn was not able to stop the advance of British forces at Gaza and Beersheba. Indeed, Beersheba was lost in a single day on 31 October 1917. At the time of the fall of Jerusalem in December 1917, Djemal Pasha asked for a leave of absence and went to Istanbul.

By the end of October 1917, the Yildirim Army Group was not yet operational and not fully formed. Dissent among its commanders weakened the Ottoman defense before the third battle of Gaza (31 October - 7 November 1917).[6]

Enver Pasha, in consultation with Hans von Seeckt (1866-1936), replaced von Falkenhayn with Otto Liman von Sanders (1855-1929), the head of the German military mission from 1913, on 24 February 1918. In addition, the 2nd and 6th armies and the Euphrates Group were assigned to the Yildirim Army Group. The first army staff was dissolved and sent with von Sanders. Consequently, the Yildirim Army Group’s staff became predominately Ottoman and received the difficult mission of protecting the remaining territories of Lebanon and Syria and keeping the lines of communication with the Hejaz secure.[7] 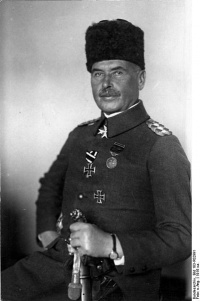