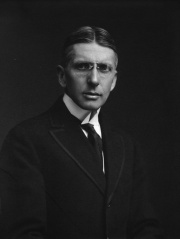 Brand Whitlock served as the U.S. minister and ambassador to Belgium from 1914–1921. During the war, Whitlock facilitated the humanitarian activities of the Commission for Relief in Belgium, which imported food for more than 9 million civilians in German-occupied Belgium and northern France.

The political career of Brand Whitlock (1869–1934) began when he served four consecutive terms as a progressive reformist mayor of Toledo, Ohio. Whitlock was also a prolific novelist with a background in law and journalism. As a politician, he was able to balance partisan interests in communal politics while championing social justice policies for the disadvantaged. He opposed capital punishment. Even the subjects of his writing demonstrated his feelings about humanity: he penned biographies of the Marquis de Lafayette (1757–1834) and Abraham Lincoln (1809–1865), both wartime heroes with transcendent significance for the independence and freedom of the American people.

U.S. Minister to Belgium during the First World War↑

President Woodrow Wilson (1856–1924) nominated Whitlock to be the American minister to Belgium on 2 December 1913, despite his lack of experience as a diplomat. Whitlock accepted his sinecure in Belgium with the mistaken understanding that it would afford him an opportunity to write novels. Instead, the war erupted, derailed his literary pursuits, and thrust Whitlock into an unexpected position in which he hoped to emulate his political idols. He chose to remain in Brussels rather than evacuate with the Belgian government in order to defend the Belgian people during the German invasion.

As the U.S. minister to Belgium, Whitlock attempted to safeguard the interests of the Belgians and accepted requests from several foreign powers to represent their interests in the German-occupied nation. On 12 October 1915, to the horror of the Anglophone world, Germany judicially executed an English nurse, Edith Cavell (1865-1915), for smuggling Allied soldiers from occupied Belgium into neutral Holland; some of these soldiers allegedly eluded internment and returned to military duty. Whitlock’s failure to obtain clemency for Cavell revealed the limits to his intercessory powers.

In 1916–1917, Whitlock likewise opposed without effect Germany’s forced deportation of Belgians as laborers, a process he described as “an inferno of horror.”[1] Unwilling to make concessions in these matters, German officials nevertheless proved conciliatory to important food relief proposals that Whitlock championed.

Whitlock arbitrated disputes between the two entities responsible for victualing the Belgians by importing and distributing immense quantities of foodstuffs — without which nationwide starvation might have occurred. Whitlock detested the combative relationship between the American Commission for Relief in Belgium (CRB), directed by Herbert C. Hoover (1874–1964), and the Belgian Comité National, led by Emile Francqui (1863-1935). CRB officials likewise reviled Whitlock for alleged leadership failures attributed to personal weaknesses. Undeterred, Whitlock focused on upholding the unprecedentedly large nation-feeding program guaranteed by the leading belligerent and neutral powers. This would ensure the uninterrupted delivery of food to more than 7 million civilians in Belgium and, eventually, nearly 2 million inhabitants of northern France living under German rule. Successful in this task but exasperated by his duties and the futility of war, Whitlock professed, “nothing was ever simple in Belgium.”[2]

The severing of diplomatic relations between the United States and Germany shortly before the United States declared war on Germany forced Whitlock, his staff, and many American CRB members to leave Belgium in early April 1917. Before their departure, Whitlock and key CRB personnel negotiated the replacement of American relief supervisors in Belgium with neutral Dutch and Spanish officials who continued the feeding program. After the Americans’ official departure, a handful of American CRB officials remained for several weeks to oversee the final stages of this custodial transfer. Throughout the remainder of the war, Whitlock represented the United States with the Belgian government-in-exile, which was garrisoned at Le Havre.

After the Armistice, he returned to newly independent Belgium and Brussels as U.S. minister, and later as ambassador, until his resignation became effective on 31 December 1921. Whitlock lived the rest of his life in Europe. He died in Cannes in 1934.