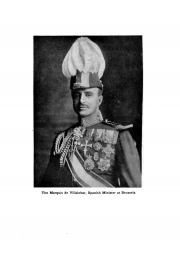 Rodrigo de Saavedra y Vinent, Marqués de Villalobar was the diplomatic representative of Spain to Belgium from 1913 to 1926. During the war, his humanitarian activities in occupied Belgium alleviated the suffering of the population.

Rodrigo de Saavedra y Vinent, Marqués de Villalobar (1864-1926) embarked on his career at the Spanish ministry of foreign affairs in 1886. By 1890, he was based in Washington D.C., before being successively assigned to the Spanish legations in Paris, London, and then again Washington. Crippled by a serious disability, but driven by an acute awareness of his aristocratic dignity, and with a sharp sense of humour, the Marqués de Villalobar did not pass unnoticed in the diplomatic world. He was in Lisbon in 1910 when the revolution broke out, causing the young Manuel II, King of Portugal (1889-1932), the last monarch of Portugal, to flee. Being much appreciated by his king, Alfonso XIII, King of Spain (1886-1941), Villalobar was promoted to the rank of “envoy extraordinary and minister plenipotentiary first class” (Enviado extraordinario y Ministro Plenipotenciario de Primera Clase), and accredited to the Belgian government on 10 March 1913.

At the time of the invasion of the Belgium, Villalobar chose to remain at his post in Brussels, as was the case with the representatives of the United States, Brand Whitlock (1869-1934), and of the Netherlands, Maurits Van Vollenhoven (1882-1976). All three became "protective ministers" of their countries, using their status as representatives of neutral powers to serve as interlocutors with the German authorities in order to alleviate the suffering of the Belgian population. In the case of Villalobar, this attitude was also intended to increase Spain’s prestige by alleviating the pain caused by the war.

This policy led Villalobar, and his American counterpart, to offer, in the autumn of 1914, their patronage of the foundation of the Comité national de Secours et d’Alimentation, an organization created by several leading Belgian employers to help the population under the occupation. The Marqués also served as an intermediary with the German occupying authorities to allow occupied Belgium to receive supplies from the Commission for Relief in Belgium (CRB), organised by the American engineer Herbert Hoover (1874-1964). Following the entry of the United States into the war in 1917, Villalobar played an important role in the resumption of the activities of the CRB in the occupied territories through the Comité Hispano-Néerlandais which was established for this purpose.

Villalobar not only defended the collective interests of the Belgian population, but was also involved in the defence of groups and individuals specifically threatened by the effects of the war. The Spanish legation, for example, applied pressure to the German authorities to secure improvements in the living conditions of deported workers, and asked repeatedly for the mitigation of sentences handed down by German military courts to Belgian citizens. Villalobar personally supported many petitions to reprieve those who had received the death penalty. His interventions influenced the final decisions, but he was not always successful. In October 1915, when he attempted to save the British nurse Edith Cavell (1865-1915) the night before her execution, the German authorities proved intractable.

Increasingly, the war-weary Villalobar was also involved in the unsuccessful search for a negotiated peace. In 1916, Villalobar sought to promote a separate peace deal between Belgium and Germany. In 1917, he also served as an intermediary for the German attempt at peace negotiations with Britain.

The intense activity of Villalobar fell within the broader policy framework of humanitarian diplomacy as conducted by Alfonso XIII. In this perspective, Spain was able take advantage of its neutral position to alleviate the pain caused by the war and, in so doing, increase its prestige and influence on the international scene. Villalobar’s commitment cannot be dissociated from his own personality, which combined a powerful will, an acute sense of honour and strong dedication toward those he undertook to help, as well as loyalty to the Spanish crown. His activity also relied on the many relationships and the goodwill he enjoyed in the diplomatic community, in the upper echelons of society under occupation and amongst the occupying authorities. His relations were not all friendly: he maintained an excellent relationship with Oscar von der Lancken (1867-1939), head of the political department of the occupation administration, and a strong friendship with Brand Whitlock, but his relationship with Herbert Hoover was often marked by fierce hostility.

Villalobar’s humanitarian activities made him immensely popular in Belgium. After the war, tributes were paid to him personally, to his country and to his sovereign. An avenue, two busts, a stained glass window and a commemorative plaque now salute his memory in Brussels. In 1921, Villalobar, still based in Brussels, was elevated to the rank of ambassador. He remained in office until his death in 1926 from peritonitis.