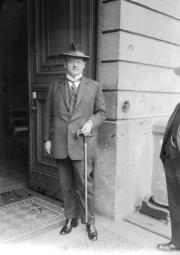 Stresemann was a leading wartime annexationist and proponent of moderate domestic reforms. Committed to restoring national strength after defeat and revolution, he became one of the Weimar Republic’s foremost statesmen. He served as chancellor during the crisis year 1923 and as foreign minister from 1923 until his death in 1929. He received the Nobel Peace Prize in 1926. Stresemann’s tactical politics remain the subject of scholarly debate.

Gustav Stresemann (1878-1929) advanced from a lower-middle-class background to become a prominent lobbyist for the manufacturing industry in Saxony and at a national level. He was first elected as a National Liberal delegate to the Reichstag in 1907, aged twenty-eight. He lost his mandate in 1912, but remained close to the party leadership. While Stresemann’s economic and moderate constitutional and social liberalism placed him on the left wing of the party, he shared his imperialist-colonialist nationalism with the right wing.

In December 1914, Stresemann was re-elected to the Reichstag in an uncontested by-election. The Burgfrieden of August 1914 corresponded with his ideal of a united Volksgemeinschaft which he considered a prerequisite for successful German Weltpolitik.

On behalf of the National Liberal parliamentary group – which he officially led from September 1917 – Stresemann participated in the Interparty Committee (Interfraktioneller Ausschuss) with the majority parties (Centre, Progressives, SPD) to promote constitutional reform in the interests of national cohesion. However, he opposed their Peace Resolution of July 1917.

Stresemann remained convinced of military victory (Siegfrieden) until 1918, advocating for annexations in Eastern Europe and German-dependent territories in Belgium and northern France. To protect German naval and trade interests, he argued in 1914 that Calais should become the “German Gibraltar” and vocally endorsed unrestricted submarine warfare to curb British sea power. In July 1917, he colluded with Erich Ludendorff (1865-1937) and Paul von Hindenburg (1847-1934) to bring about Chancellor Theobald von Bethmann Hollweg’s (1856-1921) resignation. After Brest-Litovsk in 1918, Stresemann negotiated supplementary economic treaties with Soviet Russia to buttress Germany’s position in the east. Having realized in late August that victory in the west was impossible, his hope for a protracted defensive war was shattered by the High Command’s insistence on immediate armistice on 2 October.

Stresemann reluctantly embraced full parliamentary democracy in November 1918, but objected to the revolutionary Workers’ and Soldiers’ Councils. When prospects for a united liberal party foundered – not least over his discredited wartime annexationism – Stresemann reconstituted the National Liberals as the German People’s Party (DVP) in December 1918, which he led until his death. He was elected to the constituent National Assembly in January 1919. Aware of Germany’s weak position, he nevertheless pleaded for the rejection of the Versailles Treaty.

Having failed to condemn the Kapp Putsch, the DVP entered government after electoral gains in June 1920. Stresemann became the first chancellor of a grand coalition and foreign minister in August 1923, narrowly managing multiple crises facing the republic that year.

Stresemann’s coalition collapsed in November 1923, ending his chancellorship. He remained foreign minister, navigating a pragmatic policy of understanding with the western Allies to re-establish Germany’s international standing and achieve the gradual revision of the Versailles Treaty. This policy was epitomized in the Locarno agreements of 1925, for which Stresemann and his French counterpart Aristide Briand (1862-1932) became Nobel co-laureates in 1926. However, Stresemann also refused to recognize Germany’s post-Versailles eastern frontiers, tolerated secret rearmament, and maintained friendly relations with the Soviet Union.

Stresemann’s death following a stroke in October 1929 meant he did not witness the ratification of the Young Plan and the final evacuation of the Rhineland in June 1930, which he had negotiated.

Even though some scholars have debated aspects of Stresemann’s life before and during the First World War, it is inescapable that the vast majority of historical work dealing with his life has focused on his role in Weimar politics. Three debates stand out: historians have examined the nature of his so-called “republicanism of reason” (Vernunftrepublikanismus); the relationship between national and/or European interests in his foreign policy; and whether his policies should be understood in terms of continuity or discontinuity between the Kaiserreich and the Third Reich. Despite widespread consensus that Stresemann was Weimar’s “greatest statesman”,[1] historians continue to argue about the tensions in and hybridity of his foreign and domestic politics.[2]