The Treaty of London was a secret agreement signed by Italy, Great Britain, France, and Russia on 26 April 1915, bringing Italy into the First World War on the Entente side. It therefore had a crucial impact on the conflict. Its content, however, included territorial promises to Italy that would reveal serious inter-allied differences at the peace conference. The partial implementation of the Treaty of London had massive consequences in post-war Italy and beyond.

Italy and the Outbreak of the War↑

At the outbreak of the First World War, Italy declared its neutrality (on 2 August 1914). Though allied with Germany and Austria-Hungary in the triple alliance since 1882, Italy resented its allies for having adopted a common and hard line with Serbia without consulting Rome, and complained that Italy was treated more like a client than an equal ally. Italian Prime Minister Antonio Salandra (1853-1931) held the view that Vienna had already violated the Triple Alliance by occupying Bosnia in 1908 without giving Italy any compensation, as provided for by article 5 of the alliance treaty. Furthermore, Rome was heavily committed in completing the occupation of its new Libyan colony, taken from the Ottomans in 1912; it was not ready to enter into another war, and Salandra was confronted with a strong anti-war majority in parliament. He decided to stay out of the conflict with the argument that the defensive nature of the Triple Alliance treaty did not give rise to a casus foederis, given that Austria-Hungary had declared war.

From Neutrality to War↑

However, discussions were already happening behind the scenes to bring Italy into the conflict. On 1 August the initiative came from the French, on 3 August from the Russians and on 8 August from the British. The offers made to Italy included Trento, Trieste (Italian provinces still under Austrian rule) and Valona. The Italian foreign minister, Antonino Di Sangiuliano (1852-1914), was initially cautious towards the Entente’s offers, but Britain’s intervention (4 August) acted as a warning bell: supporting the Central Powers was now very risky for a country that depended on British raw materials and was totally exposed to British naval reprisals; and even neutrality soon proved unbearable. The British established a rigid blockade and appointed special agents to the main Italian ports to provide evidence of commercial irregularities that could be used by British naval intelligence to intercept and confiscate all cargo suspected of trading with Germany. These initiatives caused serious damage to the Italian economy, but the Italian ambassador to London, Guglielmo Imperiali (1858-1944), held that Italy should not jeopardise its traditionally good relations with Britain. Thus, the only way to make the British relax their naval blockade was for Italy to join them in the war against the Central Powers.

Berlin would not remain passive, however. It pressed Vienna to reconcile with Rome by offering Italy compensation in the “unredeemed lands” in exchange for Italian intervention. Vienna refused – only very late in March 1915 did it offer Rome the Trentino, without making any concessions over Trieste. The sudden death of Di Sangiuliano on 16 October 1914 had provoked a stalemate in the diplomatic manoeuvres. These intensified over the winter, producing a race between the Central Powers and the Entente to gain Italy’s support the following spring.

In the meantime, Italian public opinion was divided between neutralists (the majority of the people, including Catholics and socialists) and interventionists (a noisy minority including nationalists and radicals, which enjoyed the support of the military élites and the royal family). Rifts soon materialised within the two blocks, with Italian conservatives supporting the Central Powers, democratic interventionists preaching war alongside the western liberal powers to complete national unification and defeat German militarism, and a socialist minority led by Benito Mussolini (1883-1945) calling for intervention to acquire new territories in the Balkans and Africa and make Italy a genuine great power.

Foreign intervention exacerbated such divisions. The former German chancellor, Bernhard von Bülow (1849-1929), moved to Rome to at least try to preserve Italy’s neutrality, exploiting his contacts in the Italian ruling class and business sector to promote a neutralist campaign. He bought or financed several newspapers and got as far as corrupting Italian deputies to expand further the anti-war majority in parliament. His actions were counterbalanced by Rennell Rodd (1858-1941) and Camille Barrère (1851-1940) (the British and French ambassadors), who financed interventionist newspapers, including Mussolini’s Il Popolo d’Italia.

By March 1915, the new Italian foreign minister, Sidney Sonnino (1847-1922), prepared a list of Italian demands for joining the Entente: Trento and South Tyrol; Trieste and Istria – but without the Italian city of Fiume; Dalmatia; a protectorate over Albania; and undefined compensation in the case of a break-up of the Ottoman Empire to counterbalance Anglo-French colonial acquisitions. Some claims were based on ethnic grounds; others originated in what Sonnino called “a need for strategic security” – in reality, they reflected an imperialist thrust. Sonnino had combined the nationalist claims and the democratic ones to satisfy the two main currents of Italian interventionism. This fundamental contradiction would continue to mark Italy’s behaviour during the war, as well as at the peace conference.

The Treaty of London was signed on 26 April 1915, after agreed amendments by the original Entente powers. Salandra presented the Italian parliament with the fait accompli the following week: Italy was to declare war within one month against all the Entente’s enemies. The treaty should, however, remain secret until the peace conference; this produced a paradoxical situation wherein the majority of the Italian people, who had remained neutral, did not even know why they were fighting. Nonetheless, the other allies, especially the British – who had also promised a £50 million loan to Italy – were satisfied, for now the balance of power seemed to shift decisively in favour of the Entente.

Polemics and the Partial Rejection of the Treaty↑

However, things took an unexpected turn. The financial loan to Italy soon proved inadequate to match Italian war needs and other loans followed, producing an astronomical Italian debt. Italy, ill prepared for war, delayed its declaration of war on the Ottoman Empire until August 1915, and resisted pressure to declare war on Germany until August 1916, with negative consequences for inter-allied coordination. Furthermore, when Rome knew of the Sykes-Picot Agreement on the future partition of the Ottoman Empire, it demanded to be equally compensated with Ottoman territories in the eastern Mediterranean, thus affecting Anglo-French influence in that area. Finally, Italy’s military effort proved less decisive than expected. Inter-allied frictions therefore continued throughout the conflict to adapt the London treaty to the realities of the war and to clarify what had been left unclear in the text – leading to the St. Jean de Maurienne Agreement of 1917.

Further polemics erupted as the end of the war approached. The American intervention meant that the peace conference was dominated by U. S. President Woodrow Wilson (1856-1924), who had never signed the London treaty. When the treaty was disclosed unilaterally by the Bolsheviks in November 1917 – revealing its annexationist project, much to the embarrassment of all the signatories – Wilson rejected its content as a manifestation of imperialism. The British and French, too, were happy to reduce their promises to Italy to keep it at bay in the Mediterranean. At Versailles, Italian promises in Dalmatia were largely rejected on ethnic grounds, and colonial compensation was almost entirely neglected. This became known as the “mutilated victory” in Italy, and the inevitable crisis it produced with Rome’s western allies had far reaching consequences in the post-war period. 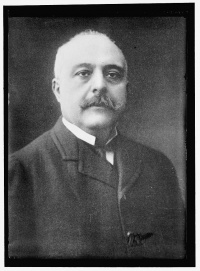 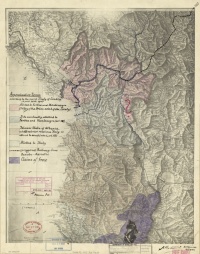 Approximative zones according to the secret Treaty of London (April 26th 1915), map