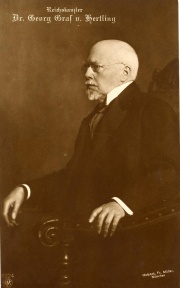 Georg von Hertling was the chancellor of Germany from 1 November 1917 to 3 October 1918.

Georg von Hertling (1843-1919) was born as a member of the German nobility (Freiherr) and promoted to the rank of Count in 1913. He studied philosophy and became a professor at Munich University in 1882. He was also a delegate to the Reichstag for the Catholic Center Party. Surprisingly, he was nominated to be the prime minister of Bavaria in February 1912, seemingly the only solution at the time to winning over the Center’s parliamentary support of the liberal ministry.

The Political Situation before Hertling’s Takeover as Chancellor↑

In July 1917 the majority of the Reichstag, consisting of the Center, the Social Democrats and the democratic faction of the Liberals, had voted for a peace of understanding, more parliamentary influence, and democratic reforms. They no longer confided in Chancellor Theobald von Bethmann Hollweg (1856-1921) whom they regarded as unable to realise their demands. The Supreme Command (Oberste Heeresleitung), represented by Paul von Hindenburg (1847-1934) and Erich Ludendorff (1865-1937) also refused to cooperate with Bethmann Hollweg. At that time, Hertling had already been asked to take over this task but refused because he thought he was in too weak a position to succeed against Hindenburg and Ludendorff. Bethmann Hollweg’s successor Georg Michaelis (1857-1936) turned out to be a complete failure. He had acted according to the wishes of the Supreme Command but had been unable to win the support of the majority parties. He resigned at the end of October 1917.

Chancellorship and Failure to Achieve Peace↑

Finally Hertling’s hour had come. On 1 November 1917 he became chancellor and prime minister of Prussia. He confronted the same problem as his predecessors: he stood between the Supreme Command with its extreme war aims on one side and the Reichstag-majority with its wish for peace and democratic reforms on the other. Hertling wanted Hindenburg to sign an agreement that the peace negotiations would be solely the chancellor’s affair. Hindenburg signed a vague document and, even so, was never willing to stick to it. Hertling accepted the Supreme Command’s demand for territorial annexations but wanted to limit them. He only managed to persuade the Bavarian king to renounce his dream that Alsace-Lorraine become part of Bavaria.

In negotiating the Treaty of Brest-Litovsk with Russia, Hindenburg and Ludendorff went against Hertling’s ideas for a more moderate peace. When in January 1918 President Woodrow Wilson (1856-1924) came out with his Fourteen Points, Hertling, in order to soothe the Supreme Command, wanted to only partially accept them. Additionally, he refused to give up Belgium. This, however, went against the wishes of the democratic Liberals. Hertling had neither the power nor the courage to carry through his point of view.

On 24 June 1918 the secretary for foreign affairs, Richard von Kühlmann (1873–1948), admitted in the Reichstag that there was no longer a chance for a victory and negotiations were unavoidable. The Supreme Command demanded his resignation and Hertling obliged.

Hindenburg and Ludendorff denied Hertling influence over the future fate of Poland and the occupied Baltic territories. Even when Rupprecht, Crown Prince of Bavaria (1869-1955) urged Hertling at the beginning of June 1918 to start peace negotiations, Hertling refused to please the Supreme Command. He believed what Hindenburg and Ludendorff told him: namely that there was still a chance for victory. Even in early September Hertling stated that Germany must not come out with new proposals for peace because this could be interpreted as a sign of weakness. During that time the Reichstag majority deemed Hertling untrustworthy.

Hertling failed to bring about any democratic reforms during his tenure. His only concession was that he chose a Liberal politician, Friedrich von Payer (1847-1931), as vice-chancellor. Though he had admitted in the Prussian parliament that Prussia’s three-class suffrage was obsolete, he took no steps to abolish it. Paul von Hintze (1864-1941), who became secretary of state for foreign affairs in July 1918, persuaded Wilhelm II, German Emperor (1859-1941) explicitly against Hertling’s will to announce democratic reforms at the end of September 1918. Hintze feared a revolution if politics remained as usual and that Hertling stood in the way of peace. Hertling stayed true to his belief concerning the necessity of an autocratic monarchical system. However, at this point, even the Supreme Command had demanded ceasefire negotiations and were ready to accept a new government in agreement with the majority of the Reichstag. On 29 September 1918 Hintze confronted the Emperor with these demands, who gave way and ignored Hertling’s resistance. At the time Hertling was seventy-five. Due to his weak sight he was dependent on his son who read the majority of documents to him. He had also started to suffer from dizzy spells. He resigned on 3 October 1918.