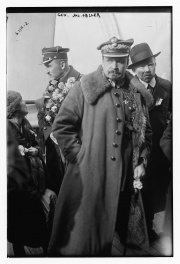 Józef Haller (1873-1960) was the third child of Henryk Haller (1831-1888) and Olga Haller née Tretter. His family, although not particularly wealthy, belonged to the landed gentry. Strong patriotic traditions were cherished and an atmosphere of religiosity permeated his family life. In 1880 the family moved to Lviv (Lwów) where Józef graduated from a gymnasium where German was the language of instruction. He continued his education in military schools in Košice, Hungary and Hranice na Moravě. After graduating, he studied at the Faculty of Artillery at Vienna’s Technical Military Academy from 1892 to 1895. On 18 August 1895 Józef Haller attained the rank of second lieutenant in the Austrian army, where he continued to serve for sixteen years. In 1903 he married Aleksandra Sala (1875-1954).

In December 1911 Haller completed his active military duty. Due to his ill health, after reaching the rank of captain he entered the military reserve. He then ran an agricultural farm belonging to his father-in-law and worked in the Farmer’s Association. He was active in the Polish Gymnastic Society “Falcon” (Sokół), which in 1912 began conducting paramilitary activities more broadly and was strongly supported in Galicia. Haller organised military exercises and courses, and prepared military training regulations for the members of the Society.

The period of the First World War↑

After the outbreak of the Great War Józef Haller was conscripted into the Austrian army, but as early as 13 August 1914 he received permission to join the Polish volunteer formations in Lviv. He worked intensely on improving their organization and training. The Polish Legions fought against Russia in the territory of the Kingdom of Poland, Galicia and the Eastern Carpathians. Haller first commanded a battalion before taking up the post of commander of the 3rd Legions’ Infantry Regiment. In the autumn of 1914 and at the beginning of 1915 his military unit fought at Rafajlova, Nadvirna and Molotkow. In extremely difficult topographic and climatic conditions, the soldiers of the 2nd Brigade of the Polish Legions defended the Carpathian passes against Russian forces, preventing them from forcing their way into Hungary.

In May 1915, Józef Haller had a serious car accident and underwent medical treatment for ten months. In July 1916 he became a commander of the 2nd Brigade of Polish Legions, which was then fighting in Volhynia. Haller remained loyal to the house of Habsburg until February 1918 when the negotiations about the Peace Treaty of Brest-Litovsk were made public by the press. Some of its provisions were perceived as a betrayal of Poland by Austria and an infringement of Poland’s national interests. On 15 February 1918, in response to the negotiations about the treaty, Haller led the 2nd Brigade of the Polish Legions and broke through the Austrian-Russian frontline at Rarańcza, eventually joining the Polish military troops in Russia.

In the spring of 1918, Haller took charge of the military troops of the Polish 2nd Corps in Ukraine. The German command attempted to disarm this formation. This led to the battle of Kaniv (Kaniów) on 11 May, where after a day’s fighting and having run out of ammunition, Polish troops surrendered. Haller avoided imprisonment and on 3 July 1918 travelled via Murmansk to France.

A Polish army was created on behalf of the Entente by a decree of 4 June 1917 from the President of the French Republic, Raymond Poincaré (1860-1934). Soldiers were recruited from the Polish community in the United States and from the prisoner-of-war camps in Italy and France. On 4 October 1918 Haller was appointed commander of the Polish Army in France, often called the “Blue Army” (due to the colour of their uniforms). He was given the rank of division general. The army’s participation in the fighting in the Western front line was rather symbolic in character, but it played a very important political role, as it linked Poland to the victorious Allies. The end of the war did not stop the formation of this army, which soon comprised about 70,000 soldiers, well armed and fully-equipped. In April and May 1919 they were sent to Poland, where they took part in the battle to secure the borders of the restored Polish state. The “Blue Army” was Haller’s biggest achievement and gained him popularity in Polish society.

After his return to the country, Haller and his troops were dispatched to Eastern Galicia, on the Polish-Ukrainian frontline. Haller gained command of the Pomeranian Front in October 1919, and aimed to secure Pomerania, the territory granted Poland according to the provisions of the Treaty of Versailles. On 10 February 1920, Haller and his fellow officers performed a symbolic ceremony of Poland’s “wedding” to the Baltic Sea. During the Bolshevik offensive in 1920, the “blue” general actively participated in the defence of the country. He was appointed Inspector General of the Volunteer Army, which he helped to form. Afterwards, he commanded the North-Eastern frontline, defending the capital.

In the interwar period Haller held a number of different social and political positions without any great success. He reproved Jozef Piłsudski’s (1867-1935) May coup d’etat in 1926 and as a consequence left the army. In the 1930s he engaged in the activities of political parties (Front Morges and Labour Party) in opposition to the Sanacja regime. After the outbreak of World War II he managed to make his way to France, and then to Great Britain. He was a Minister of Education for two years in Władysław Sikorski’s (1881-1943) exile government.

After the war Józef Haller remained in exile in London, where he died on 4 June 1960. After the collapse of communism his ashes were returned to Poland, where they are kept in a crypt in St. Agnieszka's garrison church in Cracow. He is remembered as the pre-eminent general of the “Blue Army” and one of the heroes fighting for the independence of Poland.