The Bayonne Company was the first Polish unit in France, formed in 1914 as a unit of the French Foreign Legion. The Polish Army in France was created in June 1917 and consisted of volunteers. After the war it was relocated to Poland.

In 1914, Poland had been divided between Russia, Germany and Austria-Hungary for more than a century. At the outbreak of the war, Polish subjects largely expressed loyalty towards their relevant sovereigns. On 31 July 1914 – shortly before the outbreak of the war between Germany and France – Polish emigrants in Paris formed the “Committee of Polish Volunteers for a Service in the French Army”. Since the French authorities considered the Polish issue an internal Russian problem, they permitted the creation of Polish units exclusively within the Foreign Legion.

Although there were sufficient volunteers for two companies, only one – the Bayonneans – went to the front as a complete unit. The French decided to split the second company and allocated its soldiers to other formations. The Bayonneans suffered heavy losses, and in spring 1915 they were ordered to withdrew from the immediate front line.

The Formation of the Polish 1st Rifle Division↑

On 5 November 1916, the emperors of Germany and Austria-Hungary declared the foundation of an independent Polish Kingdom to be allied with the Central Powers. Consequently, the Entente was forced to take counteraction. After the February Revolution of 1917, which had considerably weakened Russia, France adopted a different attitude towards Polish matters. On 4 June 1917, the French president Raymond Poincaré (1860-1934) approved of the establishment of the Polish Army in France. Its political representation was vested in the Polish National Committee and the Polish-French Military Mission took over supervision on forming Polish Army units.

Poles living in France, the Netherlands, England, and later those in the USA, responded to the call for volunteers. Even former German and Austrian prisoners of war with Polish nationality were recruited. They formed three infantry regiments, including units of cavalry, artillery and engineers in early 1918.

The Polish 1st Infantry Division was officially formed on 4 August 1918. Its organization, including relevant services, was the same as in a French infantry division. The equipment, uniforms and weapons were also French. Later, when the division transferred to Poland, it was called the Blue Army, because of the French bleu horizon uniforms.

The structure of the enlisted personnel was equally heterogeneous, as seen in the 1st Infantry Regiment: 5 percent of the soldiers came from the USA, 10 percent from Germany or Austria-Hungary, 10 percent were former soldiers of the French or Russian armies, and 15 percent were volunteers from the Netherlands. The training of these troops, of course, caused many problems, offset by high morale. Patriotism was likely the main impetus for volunteering. Not surprisingly, some soldiers wanted to leave the trenches; this also happened in the Polish volunteer units, where deserters were mainly former members of the French army or the Russian expedition forces.

The first unit of the Polish Army in France to arrive at the front was the 1st Infantry Regiment. It was deployed with the French 163rd Infantry Division in the region of Reims in early June 1918. Further Polish volunteer units had not yet been formed. Although the Germans launched their final great offensive in the Reims region on 15 July 1918, the Polish regiment was not heavily affected apart from some clashes between patrols.

While the Polish National Committee wished to send the entire Polish 1st Rifle Division to the front in order to improve the Polish position in the upcoming peace talks, the French opposed this desire, maintaining that the Polish units were not yet fully operational. However, on 17 October 1918, the Poles took over a relatively calm twelve kilometer long front line sector. Marshal Ferdinand Foch (1851-1929) selected the division to participate in a major offensive at Saarbrücken. However, they called off the operation after the warring parties signed a truce. On 11 November 1918 hostilities ceased.

Expansion of Polish Army in France and Its Transport to Poland↑

Between 16 April and mid-July 1919, the Polish Army was shipped to Poland and on 1 September 1919 Polish minister for military affairs, General Józef Leśniewski (1867-1921), incorporated it into the Wojsko Polskie (armed forces of Poland). 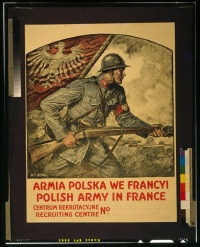