In World War I Lemberg (German: Lemberg, Ukrainian: Lviv, Polish: Lwów) played an important role as a political and administrative center of Galicia and was of great strategic significance as one of the biggest garrisons of Austria-Hungary in the east. The focus of Polish and Ukrainian national movements, Lemberg saw rising nationalist and antisemitic tensions, which were fostered by an ever more precarious supply situation and led to a fraternal war at the end of World War I.

The History of Lemberg prior to World War I↑

Lemberg was founded by the Ruthenian duke Danylo Romanovič (1201-1264) around 1250 and soon became an important political, cultural and trade center, under Polish rule from 1387 on. In 1772, in the wake of the first partition of Poland, the city was annexed by the Habsburg monarchy and became the capital of the Austrian crownland Galicia and Lodomeria. Around 1900 Lemberg had about 160,000 inhabitants. 49.4 percent were Polish, 26.5 percent were Jews and 19.9 percent were Ruthenians/Ukrainians. The Polish élites had considerable political power within the local government and were in possession of much of Galicia’s land. The emergence of Ukrainian nationalism led to the foundation of a national party in 1899 which aimed at national unity and independence. Therefore, on the eve of World War I, the situation in Lemberg was characterized by growing nationalism and antisemitism and a conflict between Poles and Ukrainians on the verge of escalation.

At the outbreak of the war Lemberg – together with Cracow and Przemyśl – was one of the biggest garrisons of the Austro-Hungarian army in the east and was of great strategic importance. It was a cornerstone in the protection of Austria-Hungary against Russia. After the first defeats of Austro-Hungarian troops, civil and military authorities began a wave of persecutions against Russophile Ukrainians for alleged treason. This led to the arrest of members of the National Party and many alleged pro-Russian politicians.

The Russian Occupation of Eastern Galicia 1914/15↑

On 30 August 1914 the Russians defeated the k.u.k. Third Army in the Battle of Lemberg. Counterattacks by the k.u.k. Second and Third Armies failed due to the numerical superiority of the enemy. On 3 September Lemberg was occupied by Russian troops. The Russians soon started to pursue a strict Russification policy. Many high-ranking politicians as well as Jews, who feared being accused of being pro-Austrian and prosecuted as spies and traitors, quickly left the city. The occupation heavily affected the population due to the limitation of free movement, deportations and executions of alleged opponents, supply and food shortages, hunger and insufficient medical care. Nevertheless, the conflict among ethnic groups continued, fostered by the daily fight for survival.

The Return of the Austrians↑

After the victory at Tarnow-Gorlice in early May 1915 two Russian corps under General Aleksei Brusilov (1853-1926) attempted to defend Lemberg against the advancing troops of the Central Powers. On 20 June German and Austrian troops started an attack on the city, which resulted in a breakthrough and the withdrawal of the Russians on 22 June. Together with the retreating Russian troops members of the Ukrainian National Democratic Party and Russophile Ukrainians left the city. The Austro-Hungarian military authorities again fostered cooperation with the Polish élites. The Austrian return led to a new wave of arrests: many Ukrainians and Polish National Democrats, accused of collaboration with the Russians, were convicted by summary jurisdiction, executed or expropriated. These repressions soon cooled down the local population’s patriotic sympathies for the Austrians.

Continued supply problems, lack of food, medication and heating material led to further deterioration of the relations among the ethnic groups. Ethnic conflicts steadily grew as Jews, Poles and Ukrainians blamed each other for collaboration with the Russians; denunciations and growing antisemitism were on the daily agenda.

From 1917 onwards the supply situation became even more precarious. This led to street demonstrations, riots, and workers’ strikes. In February 1918, when the Central Powers promised land to the Ukrainian Peoples’ Republic at the cost of a possible Polish state, the population in Lemberg reacted with mass demonstrations and a general strike.

When the Habsburg monarchy collapsed, an open conflict broke out between the Poles and the Ukrainians over the possession of Galicia. On 1 November 1918 the Western Ukrainian National Republic was proclaimed. However, after heavy fighting, the Poles forced the Ukrainians out of the city by 21 November 1918. In the following unrests from 22 to 24 November, a large number of Jewish citizens was killed or injured, their houses (as well as those of Ukrainians) were looted and burnt down. Despite mediation attempts by the Entente Powers, the war continued until July 1919. The Treaty of Warsaw, signed on 21 April 1920, finally ended the hostilities between the Polish Republic and the Ukrainian People’s Republic, recognizing recent Polish territorial gains in western Ukraine and the border along the Zbruch River. 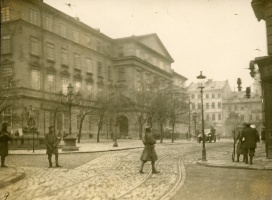 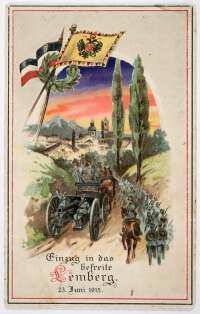