At the outbreak of the Great War, two Polish Legions were formed within the Austro-Hungarian army. They eventually increased to three brigades that participated in a series of important campaigns in the years 1914 to 1916. When the soldiers refused to swear loyalty to Germany, the Polish Legions were disbanded.

Galicia was incorporated into Austria at the end of the 18th century. More than 100 years later, at the beginning of the 20th century, several Polish sport and paramilitary organizations decided to fight for the Polish cause when the opportunity presented itself.

In July 1914, Polish politicians from Galicia approached the authorities in Vienna asking to establish Polish military formations within the Austro-Hungarian army. At the same time, various paramilitary organizations ordered the mobilization of their members. On 6 August 1914, the first cadre company crossed the Russian border and marched towards Kielce, followed by other units (about 2,000 men) commanded by Józef Piłsudski (1867-1935). They had planned to start an anti-Russian uprising with the support of the local Poles, but subjects of Polish origin were mostly loyal to Russian authorities and the operation failed.

After this unsuccessful enterprise, the Austro-Hungarian High Command decided on 27 August 1914 to form two Polish Legions: the Eastern Legion near Lemberg and the Western Legion near Krakow, each of which consisted of two infantry regiments and two to three cavalry squadrons. Both Legions had sufficient volunteers, but the Eastern Legion suffered from strong political tensions that led to its disbanding. Some of the volunteers who swore allegiance to the Austro-Hungarian emperor formed a third infantry regiment that later became part of the 2nd Brigade of the Polish Legions.

The Western Legion had no difficulties putting its volunteers under oath. From 8 September 1914 on, all its formations became part of the Austro-Hungarian Landsturm. In December 1914, the 1st Brigade of the Polish Legions was formed. It consisted of the 1st, 5th and 7th Infantry Regiments, as well as several artillery and cavalry detachments.

The 1st Infantry Regiment of the Western Legion, commanded by Pilsudski, was sent to the front in order to participate in a German and Austro-Hungarian offensive on Warsaw in the autumn of 1914. However, the operation failed and the Polish Legions were transferred to Podhale for a short rest.

The Battle of Limanowa↑

The Battle of Limanowa was part of an Austro-Hungarian counteroffensive in Western Galicia. The Polish Legions and several others quickly assembled formations were supposed to cover the flank of an assaulting group. Pilsudski, however, committed a serious mistake by interpreting a nighttime march of enemy reinforcements as a sign of withdrawal and launched an unsuccessful counterattack on Marcinkowice. In the meantime, a full-fledged Russian corps arrived in the vicinity of Limanowa; luckily for the Polish legions, the defenders managed to hold their positions.

Early in the autumn of 1914, units belonging to the 2nd Brigade of the Polish Legion were sent to the East Carpathian Mountains, where the Russians tried to penetrate Hungary. The Austro-Hungarian units at this part of the front were mixed and spoke different languages, which made cooperation difficult. Yet their commander, General Karl von Pflanzer-Baltin (1855-1925), was able to stop the Russians – also thanks to the Polish brigade.

Although the cavalry charge near Rokitna was militarily unimportant, it held great symbolic meaning. Due to a misunderstanding, the 2nd Squadron of Uhlans launched an attack without infantry support. The cavalrymen were able to cross three lines of trenches but could not take control. As a result, only a very few Uhlans returned to their own lines.

When the Russians started a great offensive in 1916, all three brigades of the Polish Legions were united near the village of Kostiuchnówka (Ukraine). The Polish soldiers were able to withstand the overwhelming Russian forces for two days – from 4 to 6 July 1916. Finally they had to withdraw because the Austro-Hungarian troops protecting their flank had abandoned their positions.

The “Oath crisis” and Disbanding of the Polish Legions↑

After bloody battles in 1916, the Polish Legions were withdrawn from the front. However, General Erich Ludendorff (1865-1937), hindered by depleted German manpower, used the Legions on a much larger scale, particularly because he was impressed by their standing during the Brusilov Offensive. It was assumed that about 1 million Polish men could be enlisted after Russian territory had been conquered. This was one of the reasons for proclaiming a Polish Kingdom on 5 November 1916. The Polish Legions were supposed to be part of its army. By this point, though, Pilsudski was already convinced that fighting for the Central Powers was no longer conducive to the Polish case, since an Entente victory was becoming increasingly likely. Consequently, Pilsudski resigned from his position as commander of the 1st Brigade of the Polish Legions.

At this time Austria-Hungary terminated the further development of the Polish Legions and decided to transfer them to the authorities of the newly proclaimed Kingdom of Poland and the Empire of Germany. However, this caused new complications in the summer of 1917 because most of the soldiers of the 1st and 3rd Brigade refused to swear allegiance to the German Empire. This crisis marked the end of the Polish Legions, which were subsequently disbanded. Poles who were citizens of Austria-Hungary joined the 2nd Brigade and were integrated into the Polish Auxiliary Corps, which had about 7,500 soldiers at the time. Former Russian citizens became prisoners of war and were kept in camps in Beniaminów and Szczypiorno. 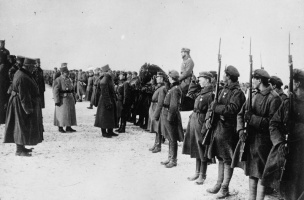 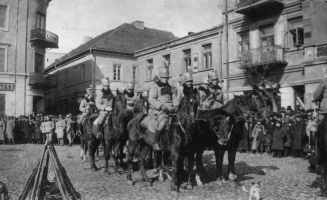