The Battle of Kostiuchnówka occurred during the Brusilov Offensive in the Volhynia region on 4–6 July 1916. It was fought between the Austro-Hungarian Corps under General Leopold Hauer’s command (which consisted of three Polish Legions and units of Hungarian Honved) and the Russian army under the leadership of General Aleksei Brusilov.

Polish Units in Kostiuchnówka area before the battle↑

The Battle of Kostiuchnówka, fought on 4-6 July 1916, was a major battle on the Eastern Front between the Polish Legions and the Russian army. The village of Kostiuchnówka, located in the Volhynia region close to the front line that had been established in 1915, was filled with Polish legionnaires. The Polish section of the front line was about ten kilometers long. Polish positions reached far behind the front line. The “Piłsudski's Redoubt” was a crucial point of the Polish sector. The bulge of the front around the dominating Polish Hill was the weakest point. Beginning in February 1916, the Polish Legions, part of the Austro-Hungarian corps of General Leopold Hauer (1854-1933), were under the command of the Austrian general of Polish origin, Stanisław Puchalski (1863-1931). Józef Piłsudski (1867-1935), commander of the First Brigade, strongly influenced the “Colonels’ Council”, a collective body established by the Polish legionary officers.

On 4 June 1916, the commander-in-chief of the Russian south-eastern front, General Aleksei Brusilov (1853-1926), led a surprise attack against the Central Powers, starting the well-known “Brusilov Offensive.” The Russians aimed to capture Kovel by attacking from the rear. The beginning of the offensive brought major strategic successes to the Russians, as they broke through the front line near Lutsk and almost annihilated the 4th Austro-Hungarian army. The breakthrough at Kostiuchnówka was crucial for the whole operation. The major push of 13,000 men was directed against Hauer’s corps and the Polish Legions.

On the morning of 5 July the Russians began heavy continuous rapid artillery fire on the Polish and Hungarian positions near Kostiuchnówka. The battlefield was densely forested, which reduced the effectiveness of the Russian artillery preparation. Intensive bombardment, however, destroyed the majority of Polish trenches, forcing the Polish soldiers to hide in dugouts. Shells also fell on the field hospital and on a legionary cemetery, ripping apart fresh graves. The Russian artillery fire hit the Hungarian positions on the Polish Hill and the First Brigade under Piłsudski especially hard. That evening, Russian infantry attacked the lines of the First Brigade in waves. The Russian infantry was pushed back by the First Brigade, but then managed to break through the Hungarian line. This situation put the Polish soldiers in the rear in great danger. The Hungarians began to withdraw within just a few hours, exhausted from the long artillery fire. The Polish battalion was surrounded, but managed to push through the Russians to the Polish Forest in heavy hand-to-hand combat. Piłsudski had to withdraw a part of his soldiers to the second line of defense. The counterattack failed to recapture the lost positions, and the attacking group lost as much as 60 percent of its soldiers. On the morning of 6 July, the Russians again started artillery preparations and began the infantry advance.

Colonel Lieutenant Henryk Minkiewicz’s (1880-1940) squad from the Second Brigade received the task to regain the Polish Hill. On 6 July, Minkiewicz captured this position. The command of Hauer’s corps ordered the Polish Legions to counterattack, aiming to recapture the first line of defense, which had been lost at the beginning of the battle. The commander-in-chief of the planned push of mixed Polish-German and Austrian forces was supposed to be Austrian Colonel Ferdinand Küttner, the commander of the Second Brigade of the Polish Legions. Küttner, however, waited too long to start the operation and the Russians led a successful surprise attack against him. Some of the Hungarian and Czech soldiers panicked and surrendered. Meanwhile the bloody battle for the Polish Forest began. The Russians surrounded the staff of a Polish regiment. The unit tried desperately to break through the Russians and finally succeeded.

The last phase of the battle: Retreat of the Central Powers↑

During the night both sides stopped fighting. The Bavarian and Austrian reinforcements appeared soon afterwards. Their officers refused to carry out the orders of the Polish commanders. The right flank of the Legions began to withdraw, and at the same time the Russians attacked the Poles and forced them to retreat. This time the Russians were driven back, due to the skillfully fired legionary artillery and machine guns. The Austrian Hauer’s Corps was not able to hold back the Russians, who pushed behind the Styr River, threatening the whole Volhynian section of the front line. The retreat of all the Central Powers’ forces in the direction of the Stochód River began. The Third Brigade covered the retreat with the fire of machine guns, and was itself surrounded by Russians. The Russians killed the crews of the machine gun nests, and the Legionaries had to use bayonets to reach their comrades. The First Brigade withdrew together with the Austrians and Germans, crossing the Stochód River. Brusilov did not, however, manage to exploit his success - before he could move forward, the forces of the Central Powers had managed to strengthen their positions on the banks of the Styr and Stochód. The Russians had no more reserves. The pause in the action made it possible for the Austrians to receive reinforcements. Instead of chasing the demoralised enemies, the Russians wasted the valuable time plundering the Austrian magazines with supplies.

Polish losses during the three-day battle were high - there were approximately 2,000 dead, wounded and missing. In total the Third Brigade had twenty-six officers and 569 Non-Commissioned-Officers (NCOs) and soldiers who were killed, wounded, lost or captured. The First Brigade lost thirty-five officers and 604 NCOs and men, and the Second Brigade had the unequal losses – in the third regiment 50 percent, in the second regiment only fifty-eight men were wounded and lost. The Legions were moved from the front line to allow them to recover and rest. The loss of this bloody battle caused bitterness among the legionaries, who lost many comrades. It took them some months to see the positive political results of the battle. The Germans noticed the bravery of the Polish soldiers, who supported them during the heavy crisis on the Eastern Front. They were ready to make political concessions for Poles in order to use the military potential of Poland to its fullest extent. The battle also led to the proclamation of the independent Polish state by the emperors of Germany and Austria-Hungary, in the Act of 5 November 1916. The defender of the future of Poland, as a German ally, was supposed to be a new Polish army, created from the Polish legionaries and under the supervision of the German High Command. 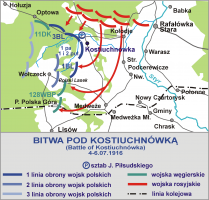 Map of the Battle of Kostiuchnówka, 1916