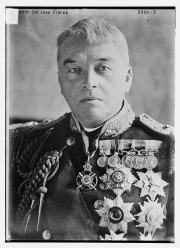 John Fisher led the Royal Navy in the run-up to and in the early years of the First World War. A controversial figure in his lifetime and afterwards, his intentions and legacy are hotly disputed by historians.

Throughout a long career that saw him rise to become the dominant personality in the Edwardian navy, Admiral Sir John Fisher (1841-1920), a skilful propagandist and unashamed self-promoter, consistently cultivated his image. He liked to be seen as "Radical Jack", the forward-thinking naval officer who would fight the forces of conservatism and bring the Royal Navy kicking and screaming into the modern world. There was an element of truth in this. Fisher was always attracted to and saw the possibilities of new technology. Moreover, as a leader, he rarely accepted that tradition constituted a valid reason for blindly continuing down well-trodden paths. Yet there was also considerable artifice in Fisher’s highly crafted and carefully formulated image. The Royal Navy was never as hidebound as he painted it and the trope of a reactionary service resistant to change was always greatly exaggerated. Fisher advanced these propositions in the awareness that a reputation as a reformer in a service supposedly short of modernisers would help him to the top; and it did. After a spell as Commander-in-Chief of the Mediterranean Fleet, Second Sea Lord and then Commander-in-Chief at Portsmouth, he was appointed First Sea Lord, professional head of the navy, in October 1904.

Fisher owed his appointment to his reputation as a reformer. The start of the 20th century was a period of heavy and rising defence spending for Britain. The war in South Africa (1899-1902) had proven eye-wateringly expensive. In addition, the Royal Navy was locked into a costly armaments race with France and Russia. The rise of other maritime powers, the most notable of which was Germany, added further unwelcome complications. In this quagmire of increasing commitments and rising expenditure, politicians were desperate for a way of lightening the defence and hence the financial burden. Fisher promised that by instituting much needed reforms naval spending could be reduced; it was an irresistible message.

Initially at least Fisher was true to his word. A series of changes were pushed through and naval spending fell. The changes included scrapping obsolete vessels, redistributing remaining assets into five new fleets and squadrons, introducing nucleus crews for vessels in reserve, and, most famously of all, building new types of warship, most notably HMS Dreadnought.

Dreadnought was the world’s first turbine-powered all-big-gun battleship. The design reflected Fisher’s long-term enthusiasm for high-speed warships carrying a big punch. It may also have been influenced by the ideas of the celebrated Italian naval architect, Vittorio Cuniberti (1854-1913), whose article, "An Ideal Battleship for the British Fleet", appeared in the 1903 edition of Jane’s Fighting Ships. Bigger, faster and more powerful than all previous battleships, it marked a watershed in battleship design. Henceforth, battleships built prior to the Dreadnought were labelled "pre-dreadnoughts", a dismissive term that signified their reduced value as naval assets, while the Dreadnought and succeeding vessels of this type were first known as "dreadnoughts" and then, as the pace of change led to even bigger and more powerful vessels, "super dreadnoughts". During Fisher’s period as First Sea Lord, fourteen of these vessels were built. Together with the eighteen ordered by Fisher’s successors, they formed the mainstay of the British fleet in the First World War. At the same time as fathering the Dreadnought, Fisher also brought into being the large all-big-gun armoured cruiser, a type of vessel later known as the battle cruiser. Always much fewer in number than the dreadnoughts, they were designed to run down fast surface raiders, but ended up serving a more conventional role in the North Sea.

The building of a large fleet of dreadnoughts proved extraordinarily expensive. The result was that while Fisher was initially able to reduce the size of the British Navy Estimates – the annual budget for the navy presented to Parliament – largely by one-off savings such as scrapping older vessels and running down stores, this was soon reversed as his building programme kicked in. By 1909 the cost of the Royal Navy was on an upward path that would rapidly reach unprecedented heights. Some historians, mesmerised by Fisher’s self-proclaimed status as a radical reformer, have argued that the construction of a costly dreadnought battle fleet was never Fisher’s intention. They maintain that Fisher had "revolutionary" plans to remodel the force structure of the Royal Navy in ways that would have been cheaper. In their analysis, Fisher wished to leave home defence to small torpedo-armed flotilla craft – destroyers and submarines – while imperial defence was entrusted to battle cruisers. This argument is highly contentious. It privileges a small selection of statements Fisher made, which, given his propensity for exaggeration and self-promotion, may well have been hyperbole, over what he actually did, which was to create a new home fleet, consisting of the newest battleships, and station it in the North Sea. This would eventually become the Grand Fleet, which, based in Scapa Flow in the Orkney Islands, kept the Germany navy successfully bottled up in harbour for most of the First World War.

Fisher retired in January 1910, but his successors continued the dreadnought build-up. When war broke out, Winston Churchill (1874-1965), now First Lord of the Admiralty, recalled Fisher and had him reappointed, against the king’s strong opposition, as First Sea Lord. To begin with such a decision paid dividends. Fisher brought a new dynamism to the management of the war at sea. In particular, he insisted that two battle cruisers be dispatched to the South Atlantic to avenge the destruction of a British squadron at the hands of Graf Maximilian von Spee (1861-1914) at Coronel off the west coast of Chile. The Germans were intercepted and annihilated at the Battle of the Falkland Islands, a victory that vindicated Fisher’s approach. In the long term, however, the Fisher-Churchill combination was not a successful partnership. The two fell out over the management of the Dardanelles campaign, an operation that Fisher opposed in the form in which it was instituted. In the ensuing controversy both resigned. Fisher would see the war end victoriously, but played no further part himself. 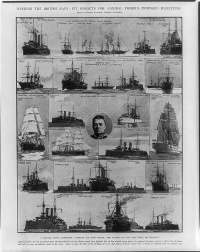 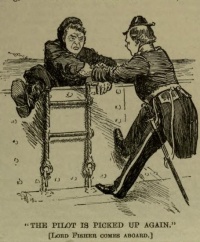 “The pilot is picked up again”, caricature