Operations from July to October 1914↑

Since 1859, German ships had operated in the Pacific Ocean. In case of war, they were to support German merchant ships and fight against the merchant ships of the other European powers operating in the Pacific. The German ships had been based out of the German harbour of Tsingtau since 1897. In June 1914, the German cruiser squadron left Tsingtau for her annual tour through the German colonial possessions in the South Sea (New Guinea, Yap, Pagan, Samoa). This tour had been running since 1900 (with the exception of 1913) to impress the islands’ inhabitants and demonstrate German power to everyone in the Pacific. The German ships were scheduled to return to Tsingtau in October 1914. However, on 28 June 1914, Franz Ferdinand, Archduke of Austria-Este (1863-1914) was killed in Sarajevo. On 7 July 1914, the German Imperial Admiralty Staff informed the German squadron that tension between the European powers on the continent was rising and that war could break out within days. Thus, the German ships went to Yap to await new orders. On 1 August 1914, the cruiser squadron was informed that war had broken out in Europe and that Japan would support the British ships. As a result, the German cruiser squadron, commanded by Vice-Admiral Maximilian Graf von Spee (1861-1914), went from Yap in the western Pacific to the coast of Chile in the eastern Pacific. The German squadron consisted of the armoured cruises Scharnhorst and Gneisenau and the light cruisers Nürnberg and Leipzig. At the end of October 1914, the light cruiser Dresden, coming from the Atlantic, joined the German squadron near Juan Fernández. Graf Spee intended to bring his cruisers through the Atlantic Ocean to the North Sea. The Germans intended to escape from the Commonwealth and Japan’s superior maritime powers in the western Pacific, which made warfare there impossible.

By the end of September 1914 at the latest, the British Admiralty knew about the German plans to sail to the Atlantic Ocean. Therefore, they sent the 4th Squadron, consisting of the armoured cruisers Good Hope and Monmouth, the light cruiser Glasgow, and the auxiliary cruiser Otranto, commanded by Rear-Admiral Sir Christopher Cradock (1862-1914). Their mission was to find the German ships and destroy them in the South Atlantic or South Pacific. On 1 November 1914, German and British ships confronted each other near the Chilean harbour Coronel.

On 30 October 1914, Graf Spee was told that the British cruiser Glasgow would be anchoring in the harbour of Valparaíso. The German cargo ships Santa Isabella and Goettingen sent the information. Spee intended to destroy the ship and sent his vessels to positions near the harbour. He placed the Scharnhorst in the north, the Gneisenau next to Boca Chica near the Arauco-Bay and the light cruisers in the south. He sent the auxiliary cruiser Prinz Eitel Friedrich, which had joined the German squadron the day before, into the harbour of Valparaíso to ensure that the Glasgow would be interned after twenty-four hours in a neutral harbour or to make sure that the British cruiser would leave the harbour. Graf Spee still did not know about the position of the other British ships – he only knew that they were situated in the south on the western coast of South America.

On 31 October 1914, the Glasgow moved to the harbour of Coronel. Its commander, Captain John Luce (1870-1932), intended to find the Leipzig. He and Admiral Cradock believed that they would only find the Leipzig. On the morning of 1 November 1914, the Glasgow left Coronel and went north. At 4:17 p.m., the seamen on board the Glasgow observed some smoke on the horizon and believed they had seen the Leipzig. The Germans also saw some smoke and believed to observe the Glasgow. Ten minutes later, more smoke was recognized by both sides. Now it was clear that the two squadrons were next to each other. The British ships changed their course south. The Germans set course to south-southwest. That resulted in a favourable fighting position for the Germans since the sun set in the west. Therefore, the British seamen were blinded by the sun and the German seamen could observe the British ships very well. Additionally, the rough sea made it hard for both sides to operate.

At 6:34 p.m., the German ships opened fire at a range of approximately ten kilometres. It must be mentioned that time and ranges differ in all reports of the battle. The Scharnhorst fought against the Good Hope, the Gneisenau fought against the Monmouth, the Leipzig fought against the Glasgow and the Dresden fought against the Otranto. The Otranto left the line of fire, because there was no use for its small weapons against the battleships. The Nürnberg kept its position in the north and entered the combat at night against the Monmouth. First hits were seen after some minutes of fighting. The Good Hope lost its main cannonries after five minutes. The cruiser exploded at 7:23 p.m. and went down to the bottom of the sea. The Monmouth was hit some minutes after the beginning of the fight. It left the fighting line and was not seen again during the fighting. It was sunk by the Nürnberg later that day using 135 shots. The Monmouth had to be sunk because she had not overhauled her flag and had not surrendered.

The Germans did not rescue the British seamen because it was impossible to use their longboats in the rough storm and waves. The British accused the Germans of murdering the British seamen and argued in a similar fashion five weeks later when they did not save some German seamen at the Battle of the Falklands. The Glasgow received two hits but was not seriously damaged. The Otranto was not damaged, either. Both ships went south, where the British battleship Canopus waited. They returned to the Falklands and prepared for another fight.

More than 1,700 British seamen died and three German seamen were wounded during the fight of Coronel. There was only a small effect on sea warfare. The British ships had to remain in the harbours of Chile and Argentina until the German cruiser squadron was destroyed. The German squadron had wasted more than 2,000 shells and was no longer able to sustain another fight against vessels on its way through the Atlantic Ocean. On 11 November 1914, the British Admiralty sent two battle cruisers and many armoured and light cruisers to defend the Falklands and find the German ships.

The battle’s influence on warfare was not as strong as German newspapers reported. The British merchant ships had to remain in the South American harbours for four weeks. They were freed after the Battle of the Falklands on 8 December 1914. The British battleships that were lost in action against the German Cruiser Squadron were old ships anyways, which could not be used to fight against the Germen High Sea Fleet. The most modern ships in the Grand Fleet, sent to the South Atlantic after the battle, weakened the blockade in the North Sea. However, the German Imperial Admiralty Staff did not get its chance fight against the Grand Fleet. In January 1915, the British ships were again able to operate in the North Sea. 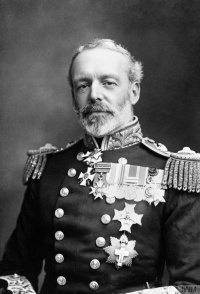 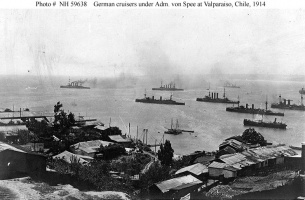 German cruisers after the Battle of Coronel at Valparaíso, Chile 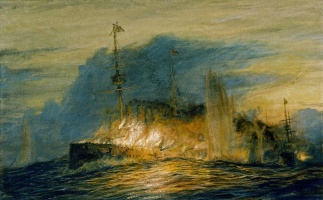 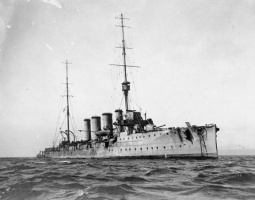 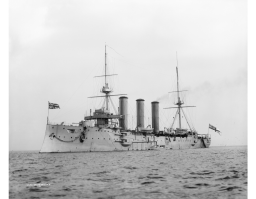 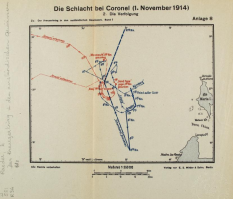 Map of the Battle of Coronel, German 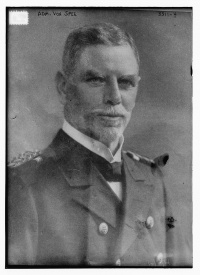 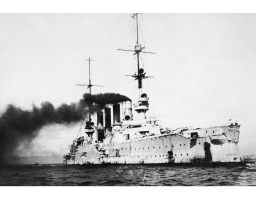