Falklands, Battle of the

During the Battle of the Falklands, the British naval force commanded by Admiral Sturdee defeated the German force under Admiral von Spee off the Falkland Islands on 8 December 1914.

The battle off Coronel, Chile on 1 November 1914 was a great defeat for the Royal Navy and proved that Vice Admiral Maximilian Graf von Spee's (1861-1914) powerful East Asiatic Squadron could not be defeated by weaker or obsolete warships. Now that Spee, with the armored cruisers Scharnhorst and Gneisenau and light cruisers Nürnberg, Leipzig and Dresden, had appeared off the west coast of South America, the Admiralty had to decide of how to handle the threat. The obvious answer was by using overwhelming force - which meant battle cruisers endowed with powerful armaments and speed that had initially been developed to counter cruiser threats on the trade routes. However, the Royal Navy's advantage in battle cruisers over that of the High Sea Fleet (die Hochseeflotte) was not great. Moreover, due to technical problems and the recent loss of the dreadnought Audacious to a mine, the Royal Navy had only a narrow margin of superiority in capital ships. Nevertheless, the new First Sea Lord Admiral Sir John Fisher (1841-1920) took a calculated risk and acted decisively. The battle cruisers Inflexible and Invincible, under the command of Vice Admiral Sir Doveton Sturdee (1859-1925), were ordered to the South Atlantic.

The major question for the British was exactly where Spee would go. The inherent mobility of a naval force meant that Spee could proceed north up the west coast of South America and make use of the recently opened Panama Canal to enter the Caribbean, and from there proceed south and round Cape Horn. Would the German fleet then attack trade routes on the east coast of South America before crossing the Atlantic in an attempt to reach home, or would they proceed to the coast of Africa to interfere with the campaigns against the German colonies? Due to these various possibilities, Fisher ordered a third battle cruiser, Princess Royal, to the Caribbean to counter any German move through the Panama Canal. Meanwhile, Sturdee would meet the German fleet should it come around Cape Horn. The British also concentrated whatever forces they could off the south and west African coasts, but were not certain that their divided forces was individually strong enough to match Spee. What if the High Sea Fleet sortied from Germany to cover Spee's return at a moment when the British had weakened their battle cruiser strength? Fisher's dispatch of the three battle cruisers therefore required considerable courage.

Spee faced an equally great dilemma. He was handicapped by a lack of bases and the need for coal. If he turned westward and headed back across the Pacific he would risk encountering the powerful Japanese squadrons as well as the Australian battle cruiser Australia in the western Pacific. Should he proceed around Cape Horn and attempt to reach Germany he would have to run the gauntlet of the Royal Navy. He was quite aware of the difficulties facing him and his probable fate. When an admiring member of the German colony in Valparaíso presented him with a bouquet of flowers, he supposedly remarked, “They will do very nicely for my grave.”[1]

Spee elected to round Cape Horn and to destroy the British wireless station at Port Stanley in the Falklands. He arrived on 8 December not long after Sturdee's force had begun coaling. Sturdee, in addition to the two battle cruisers, had the cruisers Carnarvon, Cornwall, Kent, Glasgow and eventually Bristol, plus the armed merchant cruiser Macedonia. When the German lookouts spotted the top-masts of heavy warships in the harbor, Spee realized he had come across the British and attempted to escape. The British ships put to sea as fast as they could and a running battle resulted. The difficulties of hitting targets at long range and high speed created fire control problems that caused the British to expend much ammunition; however, it was worth it, as at the end of the day all but one of the German ships had been sunk. Spee went down with his ship. The battle cruisers returned to home waters; Fisher's calculated risk had paid off. The lone German survivor, the light cruiser Dresden, was the subject of an extensive hunt among the numerous bays and inlets of the wild shores of southern Chile before eventually being located out of coal at the remote island of Más a Tierra on 14 March 1915. The Germans scuttled the ship.

The Battle of the Falklands eliminated the last sizable force of German warships on the high seas. From then on, the bulk of the German Navy was confined to the North Sea. During the remainder of the war there were lone German raiders at sea who caused some damage, but not enough to seriously threaten Allied trade. The Germans eventually turned to submarines to offset their disadvantage at sea. 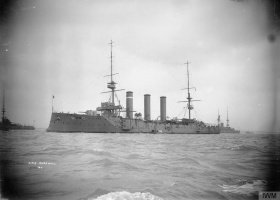 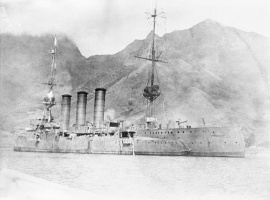 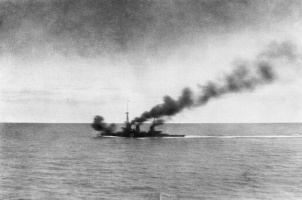 HMS Inflexible at the Battle of the Falkland Islands, 8 December 1914 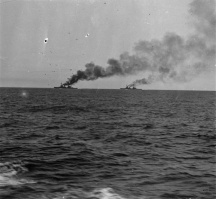 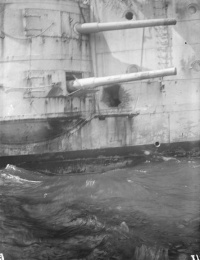 HMS Kent after the battle 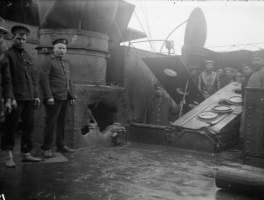 Shell damage to the bulkhead of HMS Kent 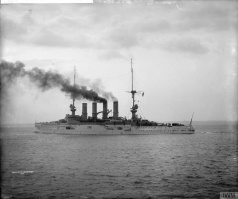 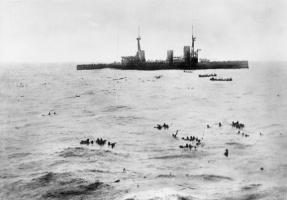 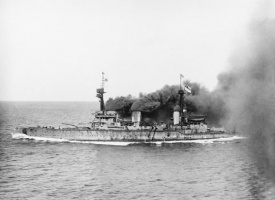