The Battle of Charleroi (21-23 August 1914), in which General Charles Lanrezac’s Fifth Army was nearly surrounded by German First, Second and Third Armies, was one of the deadliest combats that occurred in the first weeks of World War One. Although Charleroi has been overshadowed by events such as the Somme or the Chemin des Dames, this battle has not been totally forgotten.

The Battle of Charleroi was fought in Belgium, from 21-23 August 1914 by more than a million soldiers: 700,000 Germans, 300,000 French and 30,000 Belgians defended Liège and its forts. Although figures are not really reliable, it is estimated that one third of these men were actively involved in this combat. The Battle of Charleroi resulted from the movements of the French and German armies during the Battle of the Frontiers and was made possible by the fall of the forts around Liège. While these buildings were certainly formidable obstacles, Belgian General Gérard Leman (1851-1920) and his soldiers, despite being equipped with powerful artillery guns, could not do anything against an estimated 130,000 German soldiers attacking the area. Resulting in massive French losses, the Battle of Charleroi was followed by the battles of Guise (29 August) and the Marne (5-12 September).

It is important to underline the fact that the names “battle” and “Charleroi” sound pretty far from the reality of these events. Although the so called “Battle of Charleroi” might give the impression from its title that it was a single battle that occurred at the west of the wider-scale battles of the frontiers, it actually refers to a streak of contiguous fights that occurred a few kilometers to the east of the city of Charleroi, similar to the events at Waterloo, for example. These fights were not connected by a general plan but were the result of attacks launched independently by units on the battlefield, which explains why it is also referred to, especially in Belgium, as the combats of Entre-Sambre-et-Meuse (between Sambre and Meuse, two rivers that flow across the battlefield).

With the Germans walking through Belgium, General Joseph Joffre (1852-1931) had to redirect his Fifth Army into the north: from the east to the west, or from the Meuse to parallel of the Sambre. Indeed, both belligerents had the same idea: conducting a wrapping operation. This explains why both Germans and French were, on a strategic level, so offensive. In application of the Schlieffen/Moltke plan, the right wing of the German forces were supposed to succeed in this battle, that would supposedly decide the winner of the war. The general plan was to knockout France before fighting against Russia, on the Eastern Front.

On a tactical level, the situation was slightly different. Having experienced some rough combat since their entry in Belgium, the German troops were more accustomed to the reality of modern warfare than the French and knew how to better profit from the landscape. It turned out to be a decisive advantage. On 20 August 1914, General Charles Lanrezac’s (1852-1925) Fifth Army faced the First, Second and Third German Armies. Led by the “offensive à outrance spirit”, a kind of a “run and gun doctrine” that was quite popular among the French officers before the outbreak of war, the red trousers occupied the bridges across the Sambre and the Meuse in order to, within a couple of hours, attack the Germans. This was a serious mistake because the French were now occupying the bottom of the valleys and they were an easy target for German artillery. Bayonet counter-attacks ordered by the French were mercilessly repelled by German machine guns, the fire of which proved to be extremely fatal and at the same time, far more efficient than the shock of the French maneuver. The French army was prepared for a replication of 1870 warfare, but not for the modern warfare previously seen during the Boer war or the Russo-Japanese War. This led to very significant casualties for French troops. On the evening of 22 August, the 20th ID registered 2,000 losses, and the 47th IR registered 350. These figures were increased a few days after the battle when the missing soldiers were included in the total, losses came close to a third of the total workforce of these units. But the French fought bravely and also caused serious casualties to the German troops. Even if archives cannot provide an accurate number, the fact is that the Germans did not expect such a resistance. This fierce French fighting behavior, received by the Germans through the image of the sniping “franc-tireur”, acted on a psychological level as a justification for the massacres of civilians that took place in villages such as Tamines or Dinant. Alcohol, fear and extreme fatigue are also elements that explain these mass killings perpetuated by the Germans.

Considering the risk of being surrounded by the Germans, General Lanrezac decided to retreat on the night of 23 August. This decision turned out to be highly controversial, this officer being fired a week after by General Joffre. Actually, two different historical accounts emerged from this event, one celebrating Lanrezac who saved the Fifth Army with his decision to retreat, and the other celebrating Joffre, the winner of the Battle of the Marne and, in by some accounts, the savior of France.

It is often said that Charleroi has been forgotten, especially if compared to battles such as the Somme and Verdun. This idea should be, nonetheless, nuanced. In Wallonia, remembrance of the Battle of Charleroi is closely connected to the memory of the atrocities experienced by the Germans. This is why, for example, the former German ambassador to Belgium, Dr. Eckart Cuntz, publicly apologized in 2014 for not only the invastion of Belgium in August 1914, but also for the mass killings of civilians that occurred at the beginning of the four-year occupation.

In France, remembrance of Charleroi is real too. Alongside Messin, Rossignol and Morhange, the battle ranks 22 August as the deadliest day of the French army‘s long history. One hundred years after, communities of mourning still exist, especially in Britany and Cotentin where many infantry regiments suffered important casualties in those combats. This is why, in August 2014, several families attended the ceremony organized at the Belle Motte cemetery by the Comité du Souvenir presided over by Daniel Tilmant, the same way souvenir trips were organized in the 1920s and 30s for the relatives of fallen soldiers. 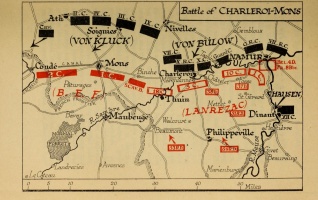 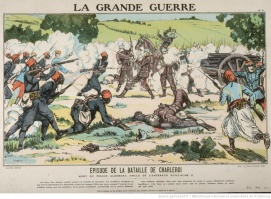 A scene from the Battle of Charleroi, color illustration 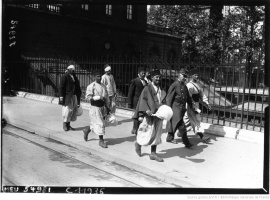 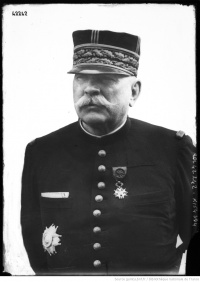