The Republic of Azerbaijan is a majority Turkic and secular Muslim nation in the South Caucasus. This republic was proclaimed on 28 May 1918, during World War I. The Bolshevik invasion on 27 April 1920 ended Azerbaijan’s brief independence. The nation restored its sovereignty with the demise of the Soviet Union.

War, Revolution and the Birth of a New Nation↑

In the early 19th century, the Russian Empire conquered the self-ruled constituencies in the South Caucasus which were formally part of the Iranian realm. Russian colonial policy paved the way for the formation of a new secularly educated Muslim elite under imperial patronage and the modernization movement launched by this local elite gradually laid the foundations for the birth of a new of nation of secular Azerbaijanis.

The start of World War I (WWI) caught the Azerbaijani intelligentsia in the midst of a new identity-shaping process, which was accelerated by the fall of the monarchy in Russia in February 1917. The Azerbaijani elite joined the ranks of the Russian Muslim intelligentsia in its quest for self-determination. The idea of pursuing multiple autonomies for the various territories with a dense Muslim population was adapted by the Congress of Russian Muslims held in Moscow in May 1917.

Everything had to be decided in the proposed All-Russian Constituent Assembly formed through free and fair elections. In the elections held in November 1917, the center-right nationalist Musavat (Equality) Party and its liberal allies emerged as the strongest political force of Muslim Azerbaijanis, followed by Muslim socialists and local Islamists.

However, the Bolshevik takeover in October 1917 following the Russian Revolution halted these democratic changes. On 11 November 1917, representatives of the Azerbaijanis, Armenians and Georgians assembled in Tbilisi to form a new local governing body – the Transcaucasian Commissariat. Although the political elites of Transcaucasia’s native peoples rejected the Bolsheviks, they still remained loyal to the idea of a united and democratic Russia. Russia’s Caucasus Army followed the native elites in rejection of Bolshevik authority as well. On 18 December 1917, with the endorsement of the Transcaucasian Commissariat, the commander-in-chief of the Russian Caucasus Army, General Mikhail Przhevalskii (1859-1934), signed the Erzindjan Armistice with the Ottomans, which had been offered by the latter.

The dispersal of the newly elected All-Russian Constituent Assembly by the Bolsheviks in January 1918 further alienated the native elites in the South Caucasus. In February 1918, Azerbaijani, Armenian and Georgian deputies elected to this assembly decided to convene separately in Tbilisi and established a new body, called the Transcaucasian Seim, with the intention of taking the lead in regional politics. The Armenian Dashnaktsutiun, the Azerbaijani coalition of Musavat with the liberals and the Georgian Mensheviks became the largest political groups of the Seim.

The political and military situation in the region began to deteriorate quickly after the signing of the Brest-Litovsk treaty between the Bolshevik government of Russia and the Central Powers. The interpretation of the third paragraph of the treaty’s Article 5 allowed the Ottoman Empire to regain control over its territories lost in the Russo-Turkish war of 1877-1878. This caused disappointment in the Transcaucasian leadership, because it had also claims over some of these disputed territories. The Seim denounced the treaty and sent its delegation to Trabzon for negotiations with the Ottomans. Having failed to stop advancing Ottoman troops through negotiation, the Transcaucasian Seim declared war against the Ottomans, which did not change the situation either. The Ottoman army continued its advance and seized control of the vital Georgian city of Batumi.

Under Ottoman pressure, in order to be able to make peace and to reject the unpleasant terms of the Brest-Litovsk treaty, the leaders of the South Caucasian nations cut their official ties with Soviet Russia. On 22 April 1918, the Seim declared the independence of the Democratic Federative Republic of the Transcaucasus. The Ottomans immediately recognized this newly emerged state and negotiations between them resumed in Batumi. Nonetheless, the new united Transcaucasian republic did not last long. While talks were going on in Batumi, the Georgians tried to secure German backing in order to oppose the territorial demands of the Ottomans. Attracted by the prospect of German support for themselves, the Georgian political elite decided to leave the union. Thus, the dissolution of the Transcaucasian republic in May 1918, resulting from internal disagreements and contradicting evaluations of foreign threat, ended with the formation of three new states – the Armenian, Azerbaijani and Georgian republics.

Azerbaijan and the Ottoman Empire↑

The independence of the Azerbaijani republic was declared on 28 May 1918 by the Muslim fraction of the Transcaucasian Seim. This fraction renamed itself to the National Council of Azerbaijan, with legislative power, and the head of the Musavat Party, Muhammad Amin Rasulzadeh (1884-1955), was elected its president. Along with the declaration of independence, the National Council approved the formation of the first Azerbaijani government coalition led by Prime Minister Fatali khan Khoyskiy (1875-1920).

The independence was proclaimed in a very complicated political and military situation. Based in Tbilisi, the newly formed Azerbaijani government did not have control over its territories. The capital city of Azerbaijan, Baku, was under Bolshevik rule. To regain the access to its homeland, representatives of the Azerbaijani government sought help from religious and ethnic brethren, i.e. the Ottoman Empire.

Having realized that the military force under the control of the Bolsheviks would not be enough to defend Baku city and its massive oil reserves from the advancing Ottoman troops, Baku’s Bolshevik Soviet resigned and handed over power to the newly created so-called “Central Caspian Dictatorship,” which in its turn officially requested the help of the British army. Although some units of the British “Dunsterforce”, deployed in late 1917 in Persia, arrived in Baku, their size was not sufficient to defend the city from the Ottomans, who were supported by the majority of the local Muslim population. The Ottoman troops were also aided by Azerbaijani military units from the former Tsarist Army (cavalry regiments of the so-called “Wild Division”– “Дикая-Дивизия”) led by the former Russian artillery general of Azerbaijani origin, Aliaga Shikhlinski (1865-1943). On 15 September 1918, after heavy battles, Ottomans took Baku in the name of the Azerbaijani republic.

On 30 October 1918, according to the terms of the Armistice of Mudros, the Ottoman Empire admitted defeat in WWI and the Turkish army units had to be withdrawn from Azerbaijan.

After the War: The Allies in Azerbaijan↑

The mandate for the control of this region was assigned to the United Kingdom and on 17 November 1918, British Indian Army units entered Baku. The head of the British Expeditionary Force, General William Montgomery Thomson (1877-1963), supported the local authority of the Azerbaijani government. On 7 December 1918, with the consent of General Thomson, the first ever Azerbaijani parliament convened.

The Demise of the Azerbaijani Republic↑

However, on 27 April 1920, Bolshevik Russia’s 11th Red Army invaded Azerbaijan with the pretext of going to Anatolia to help the Turkey’s Kemalist movement. It never left. The Azerbaijani parliament was dissolved and the first republic ceased to exist. 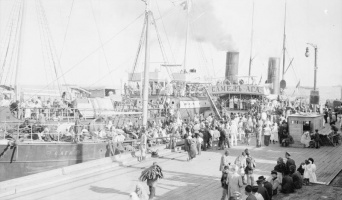